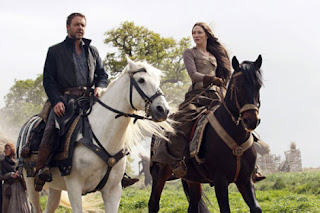 Last night I saw the Russell Crowe/Ridley Scott version of Robin Hood and thoroughly enjoyed it – rather in the way I enjoy a thoughtless snuffle through a chocolate box. It was pure Disney, ransacking history with innocent abandon - and it was nice to see the French being the villains for a change - instead of the English. This is as it should be. One can only take so much of Brave-Heart - it’s portrayal of Edward 1st as a cold, clip-toned Victorian; and Patriot with its quota of English psychopaths. No, it was good to see red-blooded French villainy. The world was back in its place that night, and if the price involved reshaping history, so be it.

I could take decaying Saxon Manor houses with large glass windows, Cate Blanchett looking beautifully enigmatic and bleak, taking on the role of Peter Pan and leading the ‘lost boys’ in the final battle. I could take the French invasion fleet that wouldn’t have looked out of place at the D Day landings. Those rectangular boxes disgorging fully armed knights ploughing through surf – pure genius.

It was fun seeing Eleanor of Aquitaine in London, and showing surprise when she hears of her son, Richard’s death. Consummate actress, and presumably with her own executive jet - it’s the only explanation - since Eleanor nursed Richard in her arms as he died – in Southern France.

And I loved Oscar Isaac’s portrayal of King John as a medieval Russell Brand…was that deliberate? Johnny Depp based his pirate on Keith Richards. Okay, I know King John has a bad press, but Russell Brand? Strange – like one of those chocolates you’re never quite sure of.

To the very end the film amazes. When Robin fires an impossible shot at the fleeing villain – Godfrey - the arrow goes through Godfrey's neck at a trajectory that would have the Kennedy conspiracy industry at it for years.

Finally we have Robin playing a key role in the creation of the Magna Carta. That was a rich and chewy chocolate – especially when he reveals knowledge of C17th jurisprudence. “Every man’s home is his castle!” he declares – as did Sir Edward Coke in The Institutes of the Laws of England, 1628:
"For a man's house is his castle, et domus sua cuique est tutissimum refugium [and each man's home is his safest refuge]."

Mind you, King John, initially confused by this, soon got his own back, riposting with another  C17th concept that kings ruled by ‘Divine Right.’

There was one, nutritious nut in this box of indulgence. The death of Sir Walter Locksley. He looked so peaceful and good, adorned in white and garnished in lilies – too good to be buried in fact. But, perversely, it reminded me of how many truly good men and women have died over the years Sic transit gloria mundi.
Sic transit gloria Robin Hood.

What!?! You mean this movie wasn't 100% accurate? I'm so disillusioned.

I think we Yanks have always been happy to pick on the French, it's just that the English are so much more interesting. And require slightly less language translation.

I've always found it strange that a historical novel is pilloried if historically inaccurate - and novelists of every genre are exhorted to 'research' - whilst films are in some way exempt. Yes, films are entertainment, but so too are novels. And, of course, you're right, Linda. The English make far deeper villains than the French : )

Um...Russell Crowe. After that I didn't care that it was inaccurate. LOL.

You make a good point about the inequity between novels and movies. While I'm annoyed with historical inaccuracies on film, it bothers me more in novels. Maybe because I spend a longer amount of time absorbing the words and meaning whereas movies are transitory sweets--much like Russell Crowe.

Russell Crowe - a 'transitory sweet'. I'm sure he and his publicity machine would be delighted with that - and his mother : ).

Mind you, I too would like to be a transitory sweet. Money and fame sweetens most things.

I rather enjoyed it, too. I thought Mark Strong was brilliant. Haven't enjoyed a villain that much in some time. As far as respect of history and tradition are concerned, I think I've already tweaked that nose sufficiently. Thank you.