The battle for Monmouth!


During the English Civil war, Monmouth changed hands three times, finally succumbing to Cromwell in 1645. When Cromwell visited Monmouth he stayed in the Queens Head and slighted* Monmouth castle.

Monmouth has another link to the Civil War. Brigadier Peter Young, an old boy of Monmouth School formed the famed ‘Sealed Knot’ Society, now the largest re-enactment group in Europe with thousands of members. It derived its name from the historical 'Sealed Knot', a secret society bent on overthrowing Cromwell and restoring the king. A fragment of the knot, a strand might be a better way of putting it, visited Monmouth

The Owl man of Monmouth. Not a member of the Sealed Knot. A harbinger perhaps. 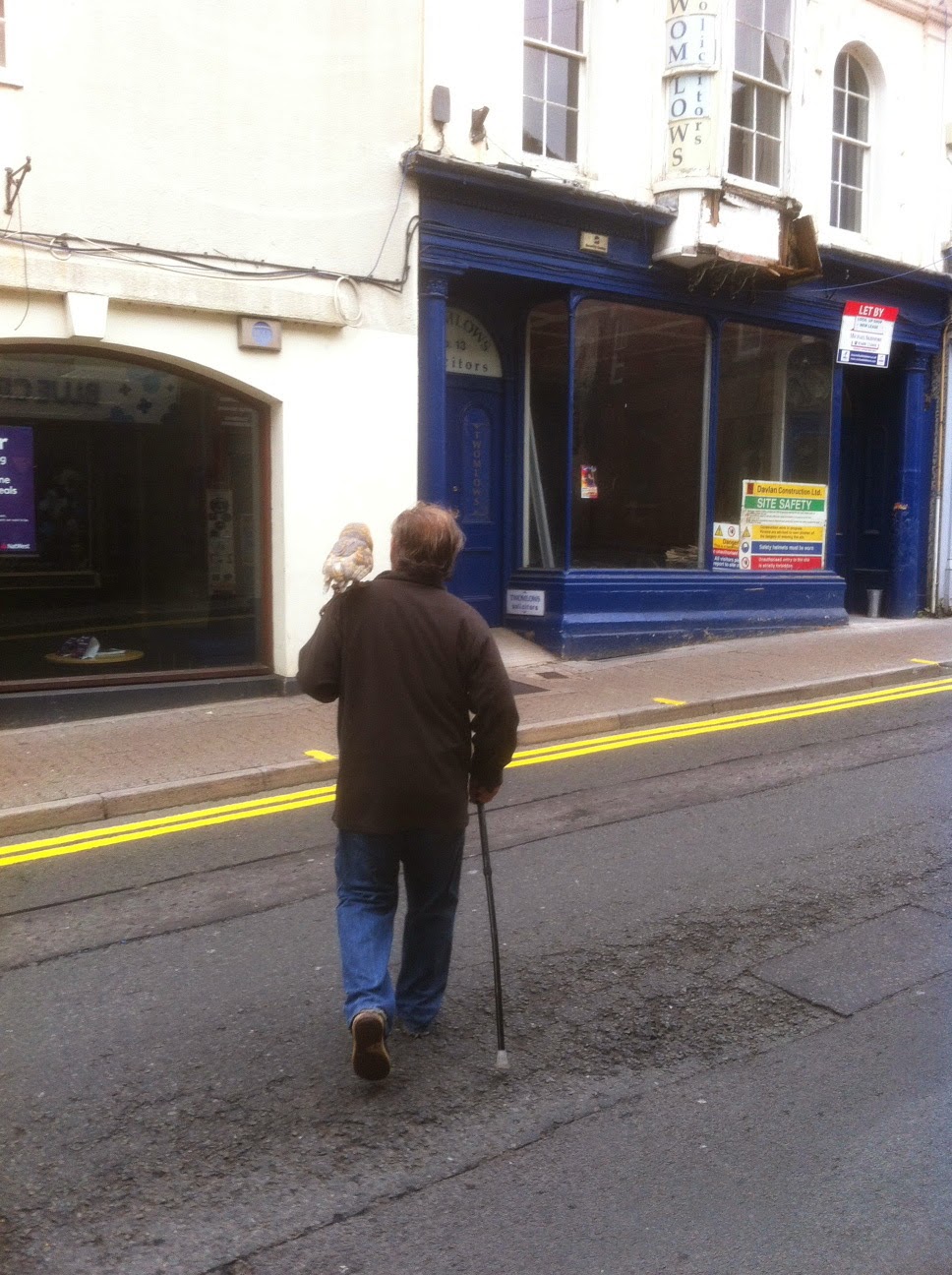 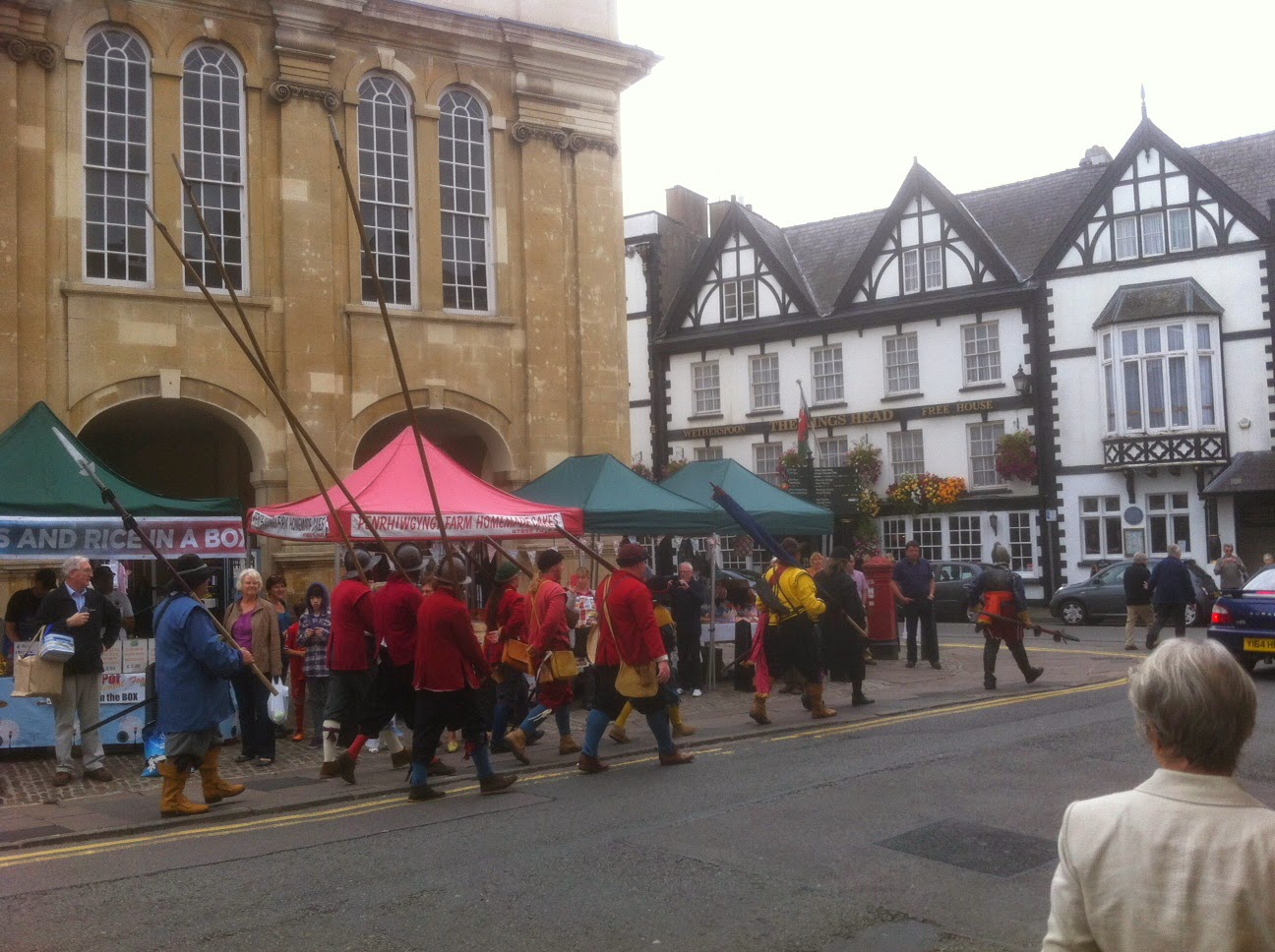 Considering strategy - or as it turned out confusion. 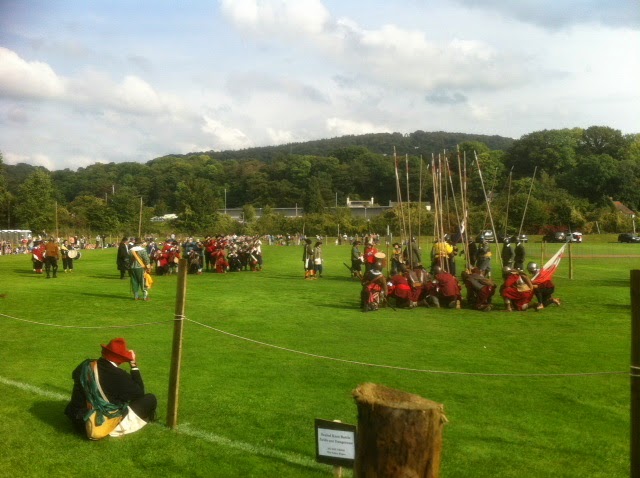 Uh uh. Pikemen on the move 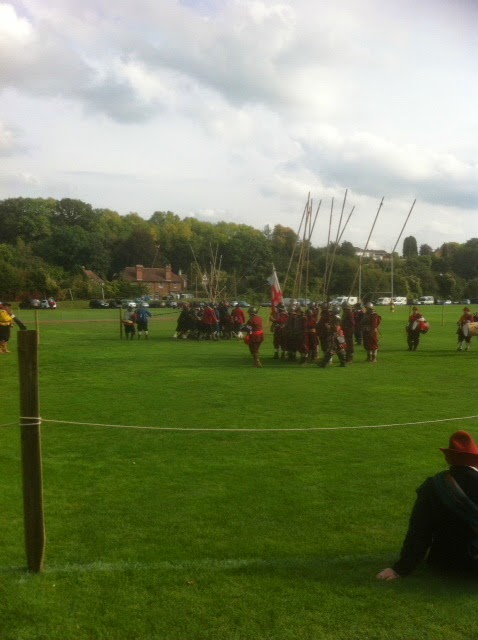 Man against pike. The pikes are winning 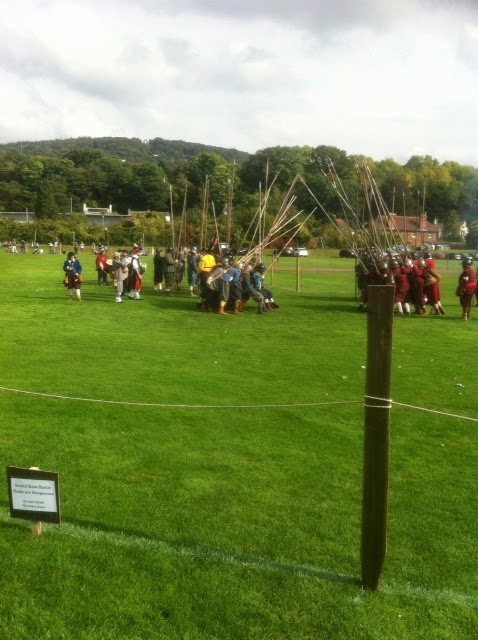 The pikes meet.
Now for the good bit - when steel rips into flesh 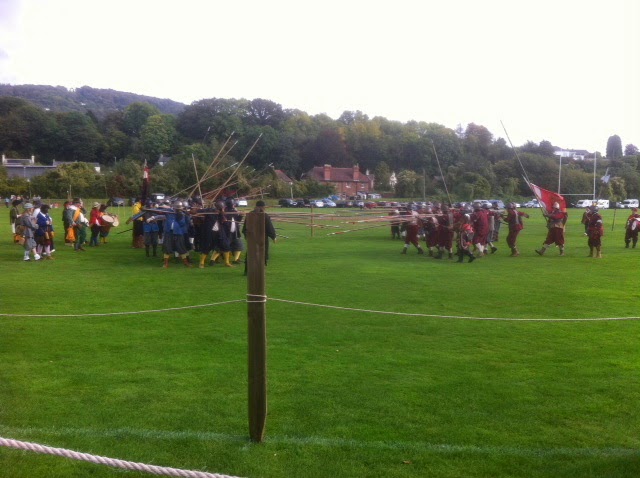 What...? No blood! A rugby scrum with pikes. They look like garnished cocktail sausages. 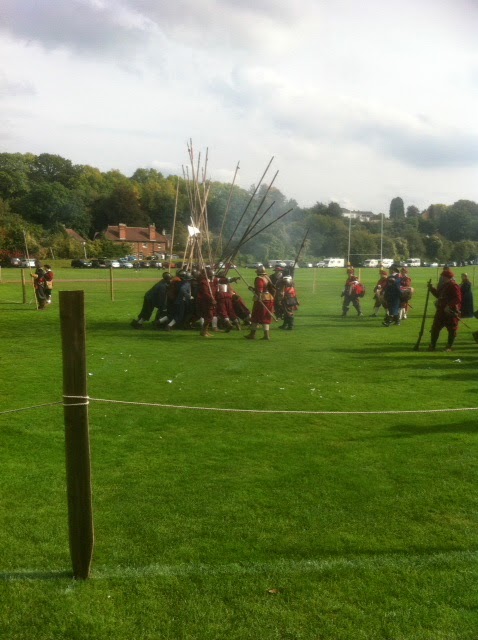 Lots of huffing and puffing. No entrails or blood 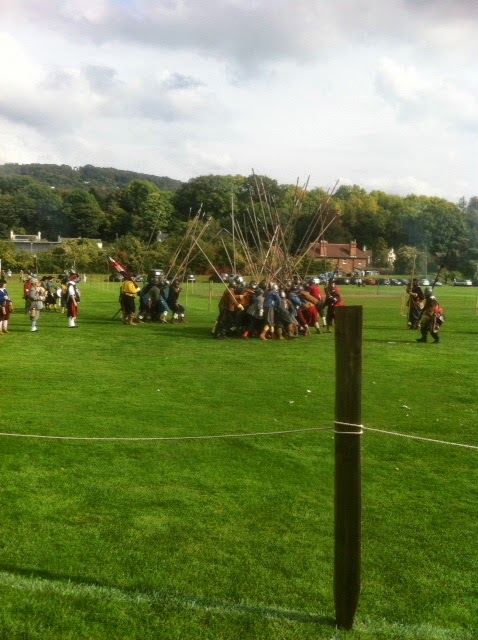 Don't know what's going on here. Some pikemen marching, while others huddle doing God knows what. One of the pikemen has eaten all the pies. 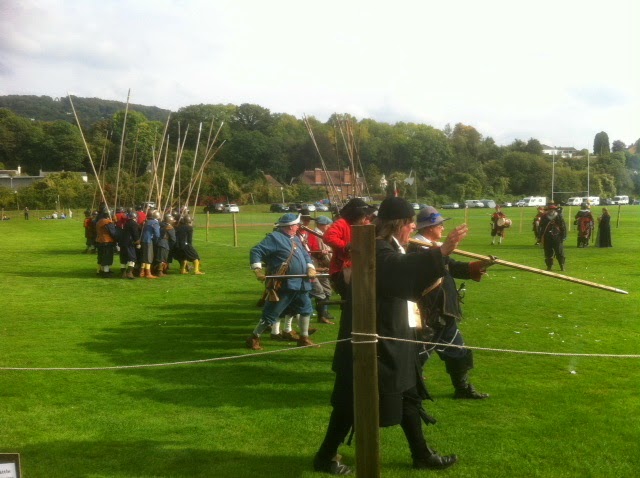 Another pikemen looks like a bank manager or Geography teacher. He's taking it very seriously. 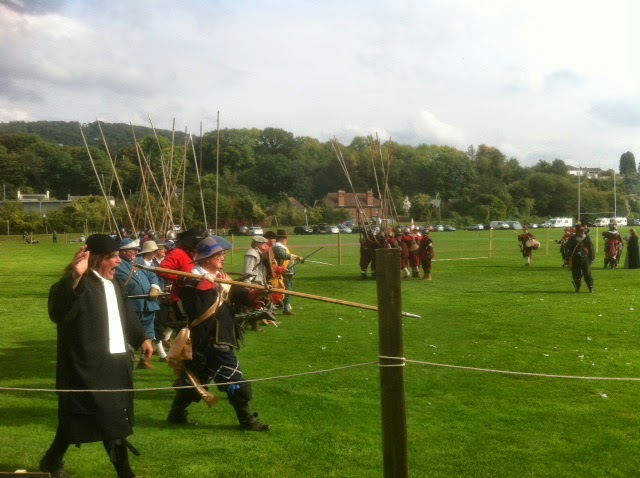 Ah, musketeers priming their muskets. Note the one in the middle looking puzzled. Probably wondering whether there'll be any cocktail sausages left. 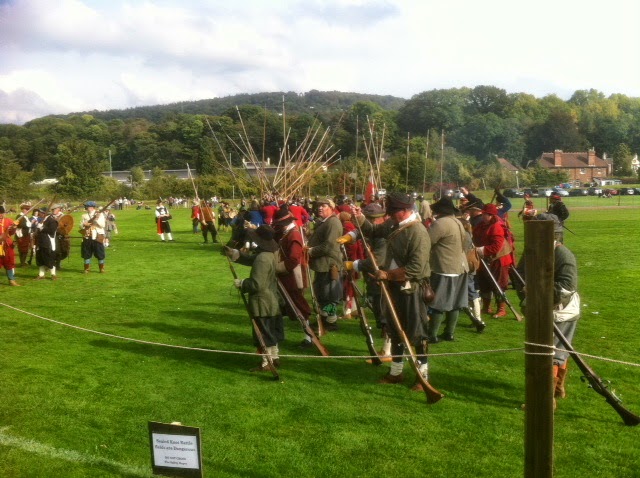 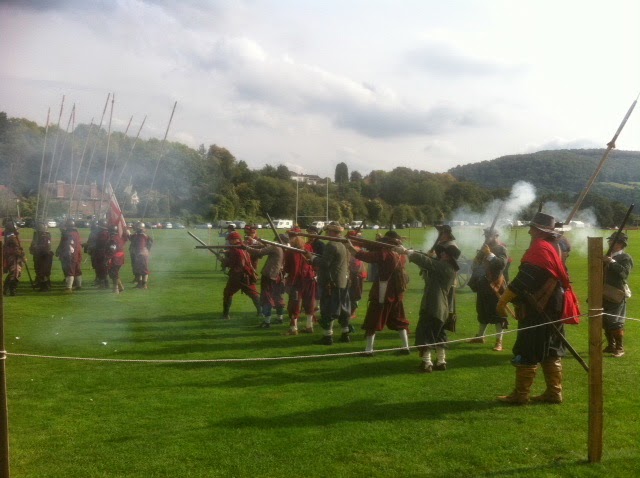 Fire!
(note an example of 'a flash in the pan') 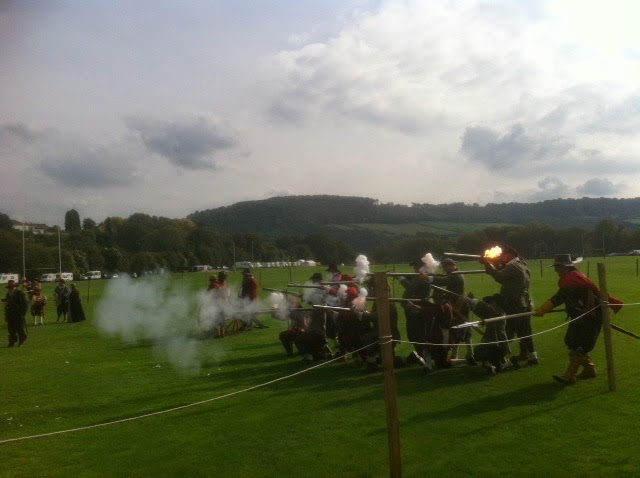 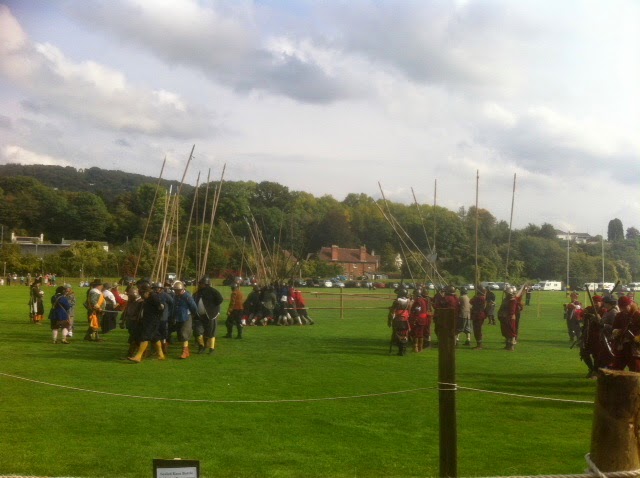 Musketeers in action again. Pikemen are having their own little party 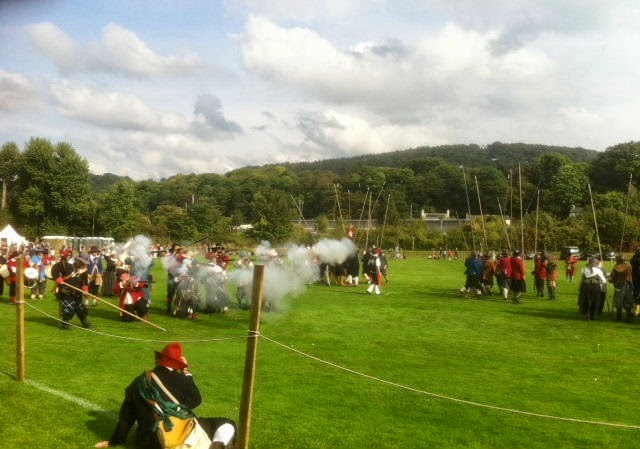 And one thing I didn't:

*  Far from being a breach of manners, 'Slighted' refers to damaging a castle so making it unusable.

No blood or entrails? What a waste.

We have a local re-enactment group that does a famous local Indian (excuse me, Native American) battle. We don't get any blood or entrails either.

So no haggis or blackpudding for anyone :( Mind you, it could be worse vis a vis 'elf and safety'. They could all have been wearing high vis jackets

I'm sure the sausages enjoyed themselves.

Mac, they were grinning from ear to ear :)

At least it looked like a lovely day for a battle.

Re: garnished cocktail sausages
Brilliant! You should be on television.

It was a lovely day, Maria. God smiles on Monmouth. Ref television, I'll leave that to my daughter : )