A day in a life


The day started low key, the highlight being a Dyson Airblade hand-dryer in a motorway rest room. I inserted my hands in the thin gap and watched warm air pulverising skin. It was like watching an art installation, the skin rippling like sand in a strong wind. I stared hypnotised, thinking of the artist Tracey Emin’s unmade bed. This was far superior. My attention wandered to the Dyson logo and I noted this was a Dyson Airblade V. Wondered what a Dyson Airblade Mk 2 would be like; would my hands notice the difference. One thing for sure it was far superior to the Warner Howard hand dryer where watching paint dry takes half the time.

Even so, there was some comment when I got back to the car. Where had I been? What had taken me so long? I held my silence, wanting to stay in the moment…of rippling skin and the sound of hot air.

The day held still more surprises. We parked the car in Gerrard’s Cross and took the train from there to London. In front of me was a man with an iPad. He was racing through an anonymous city in a bright red car. Intriguing stuff - sitting on a slow train to London and simultaneously racing through Manhattan – or wherever it was. There was no time to cast judgement. I was caught, my head swaying this way and that, following the road as the man swivelled and turned the iPad in synch with a car travelling at incredible speed. We raced through Tokyo, Venice, Paris - a new car for every city. By the time we reached Marylebone I was exhausted…disappointed too. We were just about to hit Moscow.

As you can see, this was a day packed with incident but these were the nibbles, the canapés before the main course. We had booked a night at the St Pancras Hotel – a cross between Downton Abbey and Hogwarts - in the middle of London. It was our daughter’s graduation the following day and we’d promised ourselves that this would be a part of it – one weird and magnificent experience – because we had booked a luxury suite with all the trimmings and more. 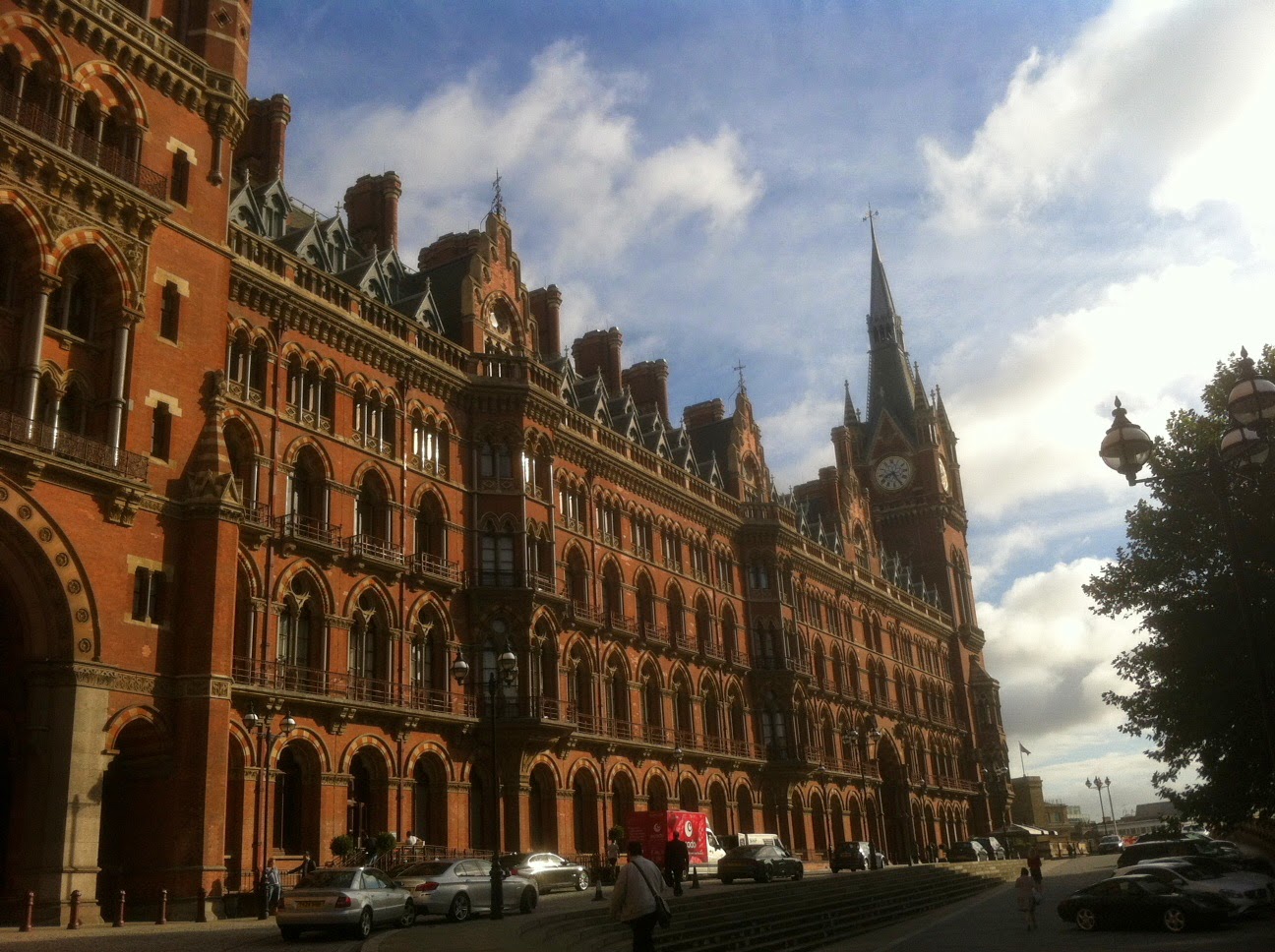 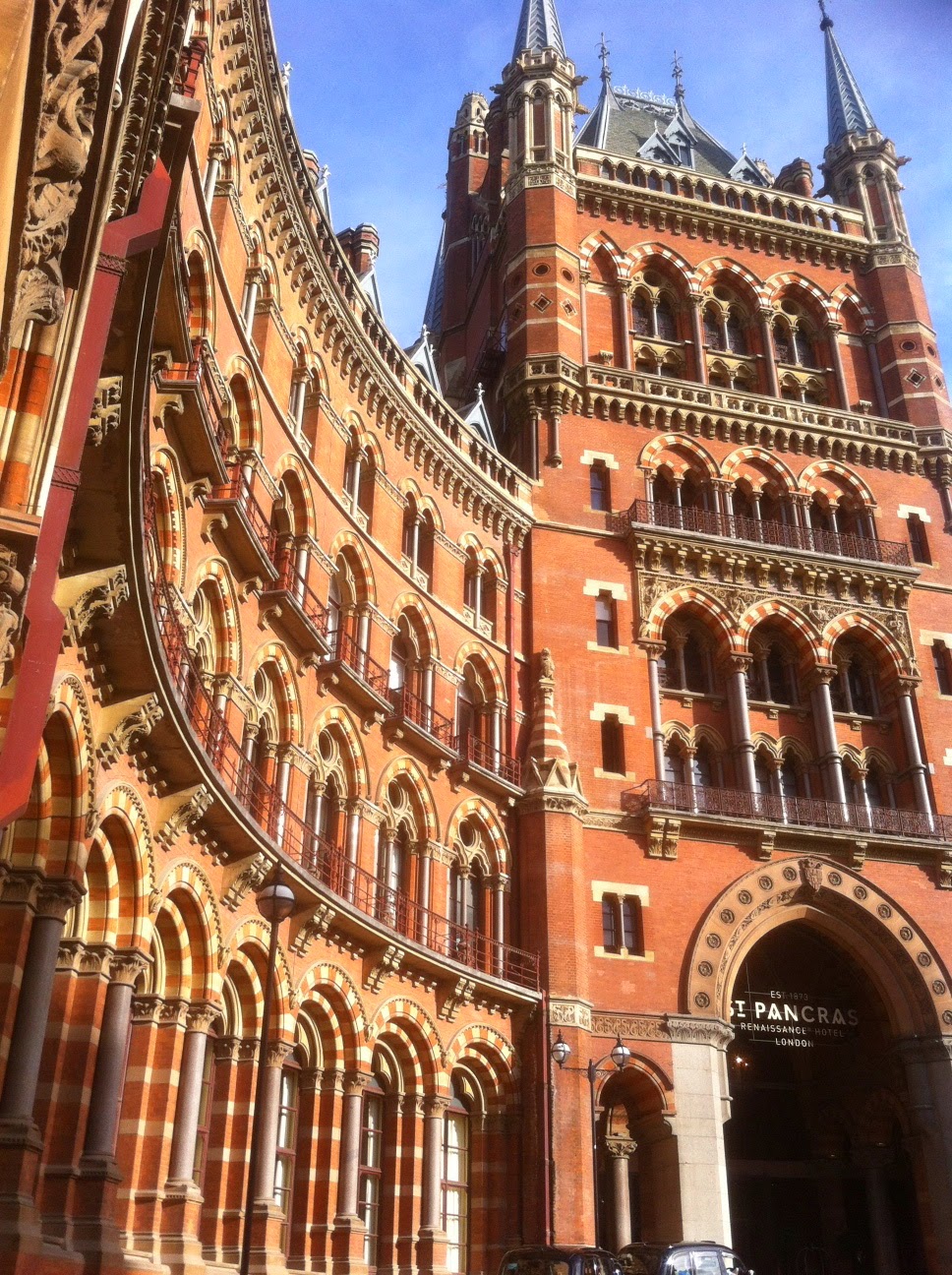 We were offered bon-bons by an attractive East European whilst she took down our details. And the treats continued. Whilst our bags were taken to a room we hadn’t yet seen, a director showed us round all the facilities we could enjoy during the short time we were there. He led us through a large and packed bar were ‘ordinary’ people drank. But we had ceased to be ordinary.

Imbedded in a dark panelled wall was a door guarded by two very discreet men. We were led through into a world of silence and wealth…and more bon-bons. This was the club room where we could enjoy afternoon tea, and then later pre dinner canapés, free beer and wine and even free shorts between the hours of 5pm and 7pm.

This was going to require a highly disciplined use of time if we were to squeeze in all that had to be squeezed in – more so when he next showed us the sauna, gym and swimming pool. My daughter and I exchanged glances. SAS accuracy. 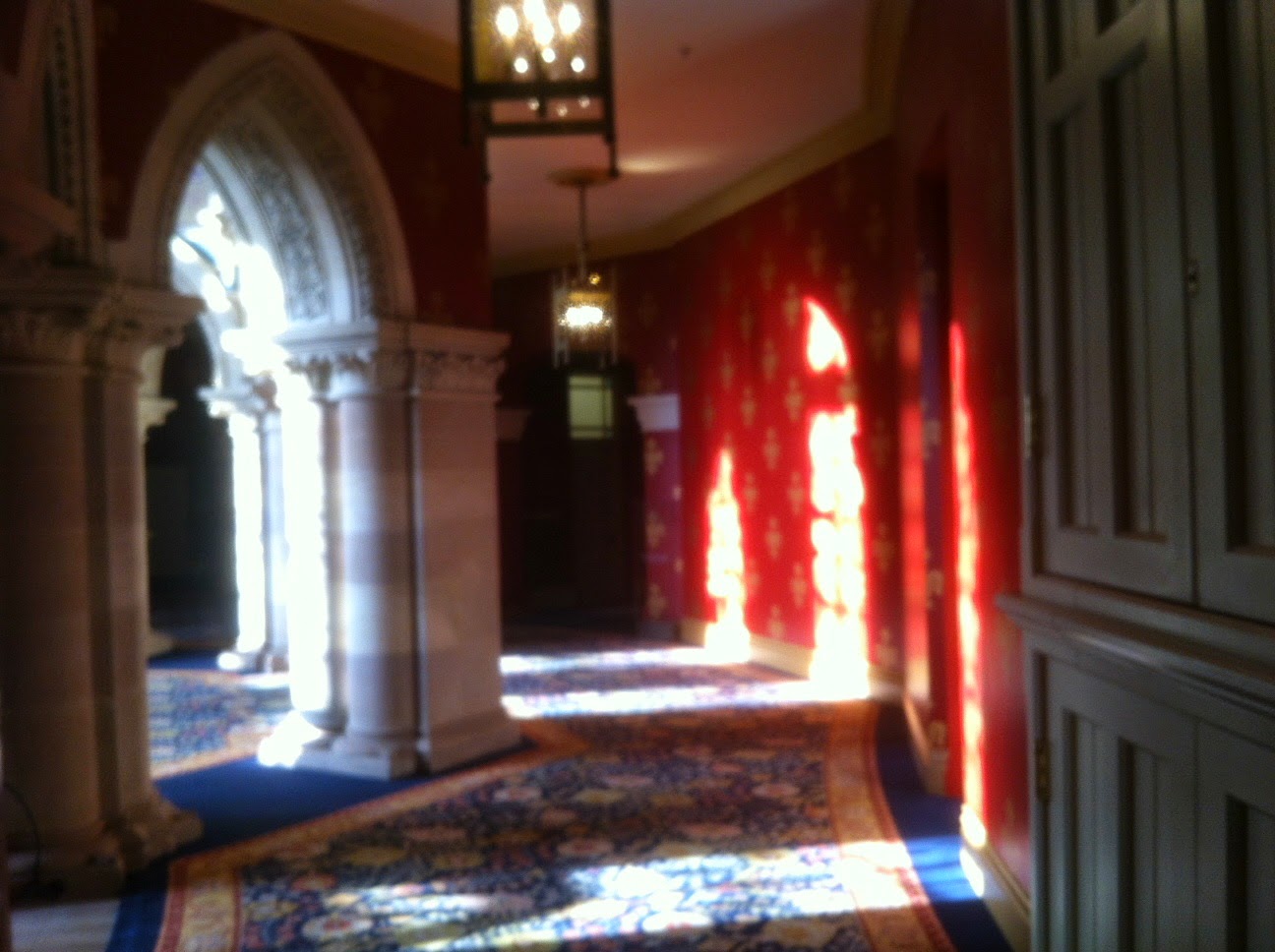 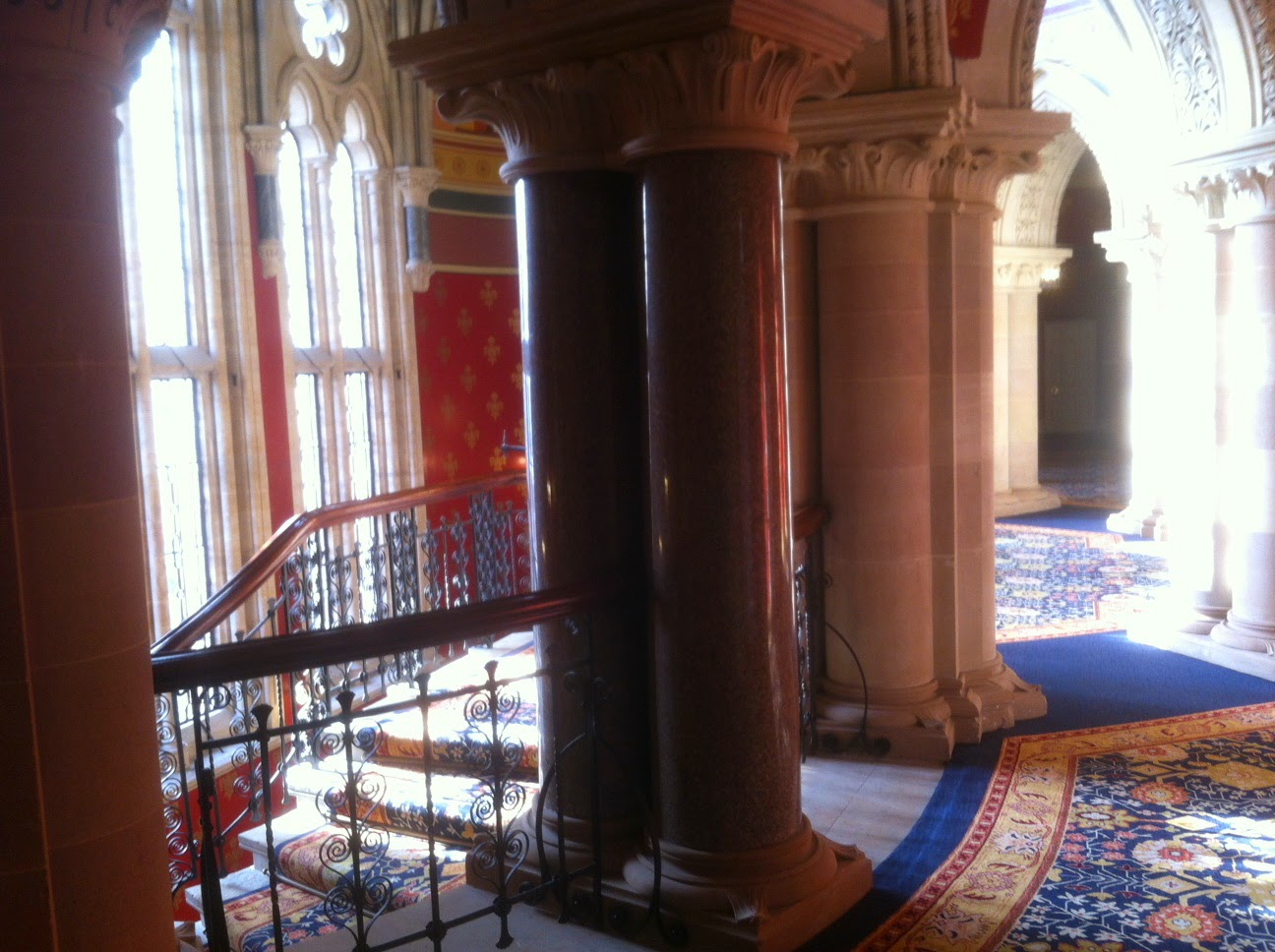 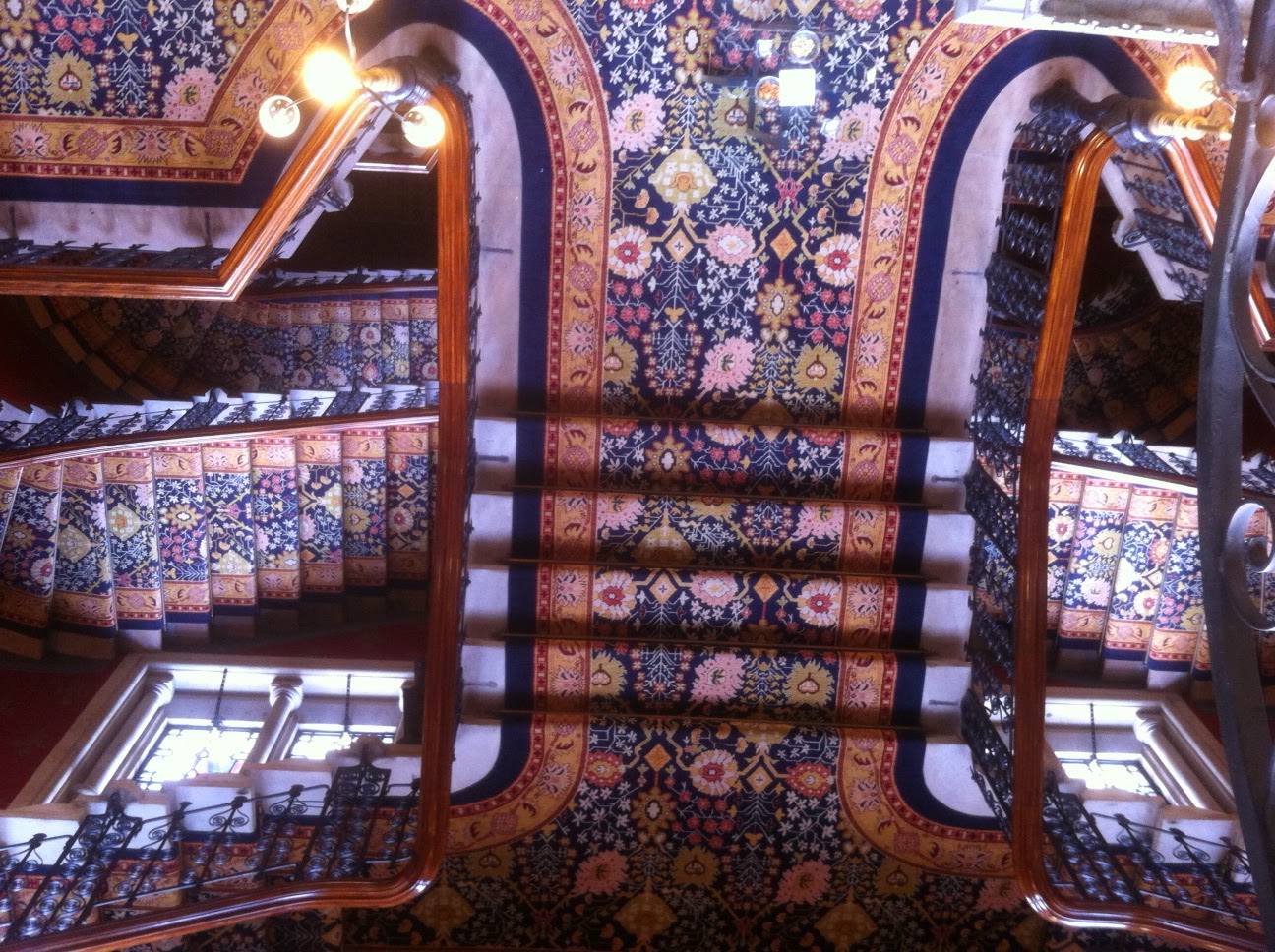 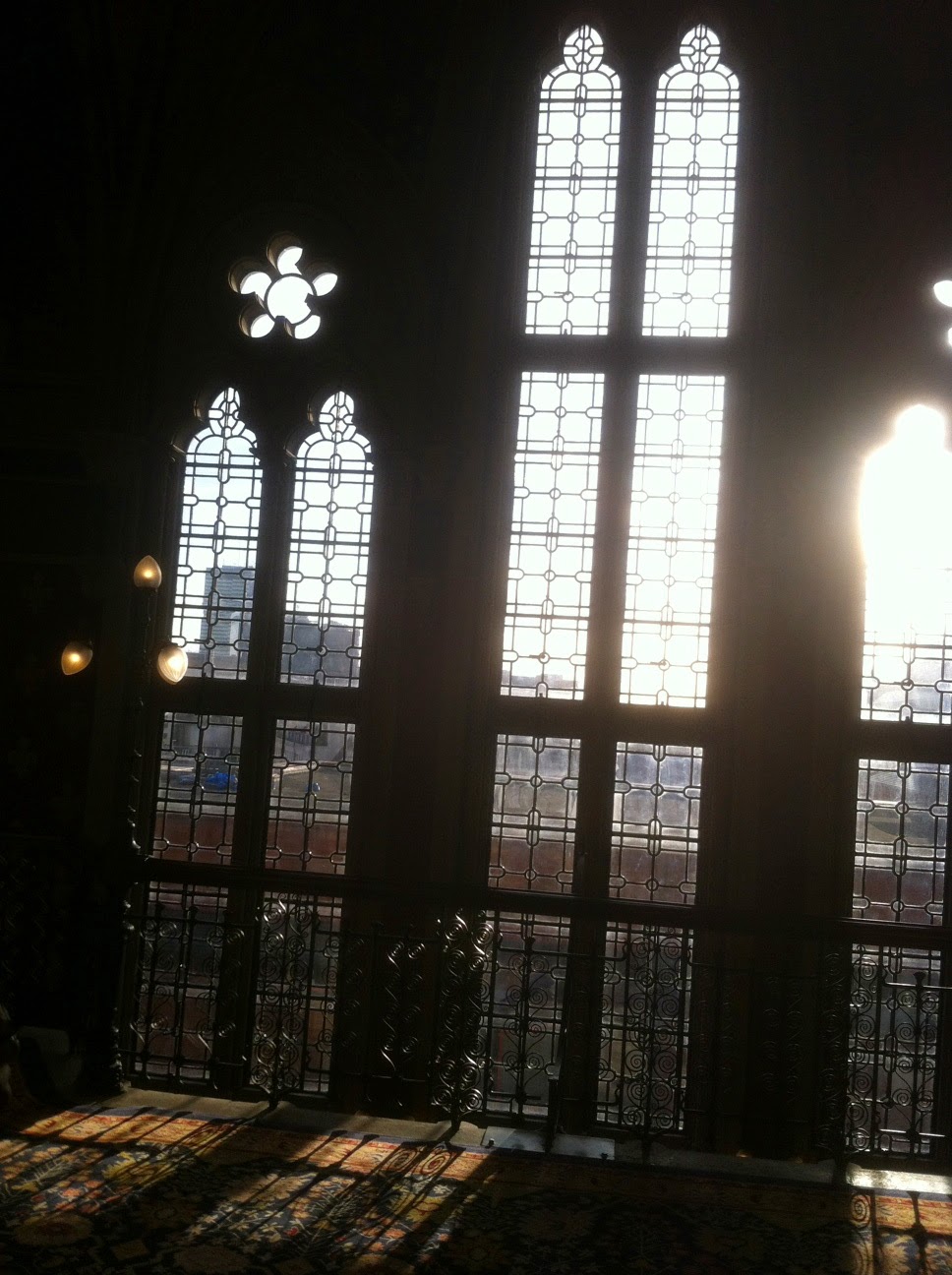 Our room was magnificent – the biggest TV I’d seen outside of a show room, a Bang and Olufson music centre. We watched ten minutes of news, listened to ten minutes of music. No time for anything else if we were to make the pool and the pre dinner canapés. The room was full of surprises, a discreet safe, a well stocked drinks’ fridge, an expensive expresso coffee machine…we were going to be up half the night at this rate.

I was particularly struck by the curtains – or to be more accurate the tassels adorning them – over two feet long and so fine it was like stroking a woman’s hair – not that I go in for that often. 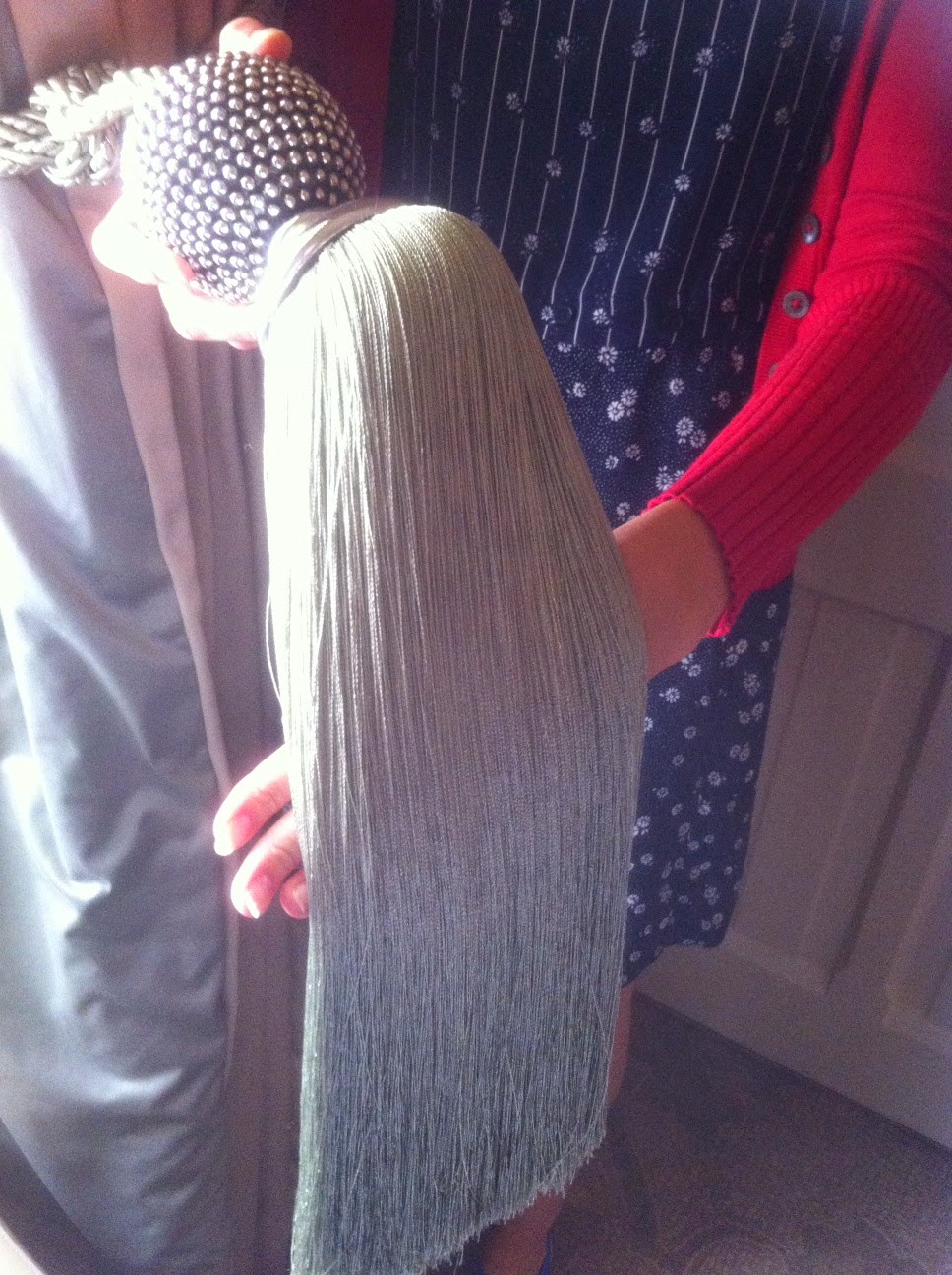 The only design flaw was the giant mirror that started halfway up the wall and reached the ceiling. You couldn’t actually see yourself in it without jumping up and down. You were panting by the time you finished combing your hair. 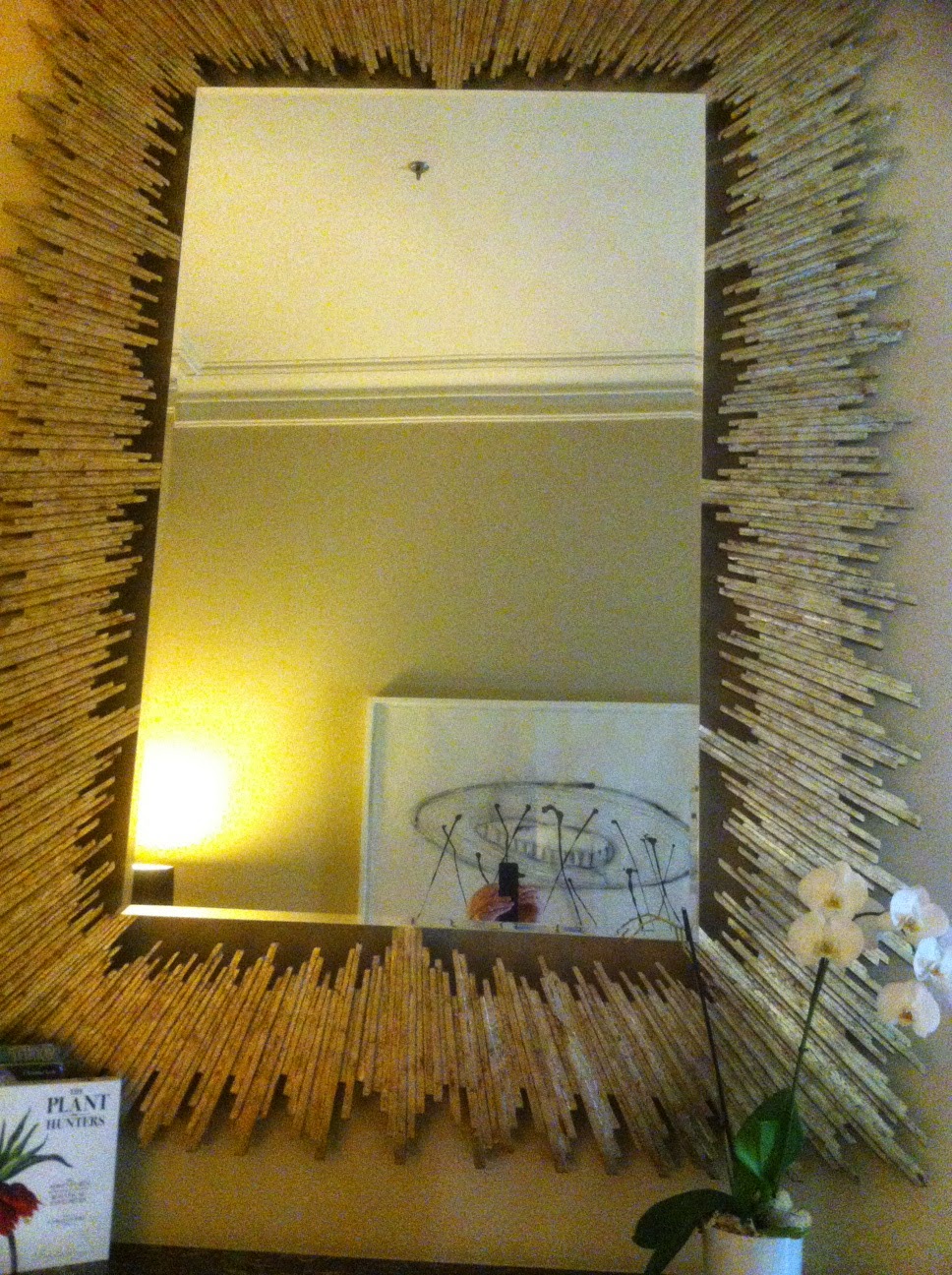 Time for a swim.


The pool was not large but had whirlpools and subtle lighting that changed the water from pale aquamarine to dark indigo as you swam. The sauna was great – all ten minutes of it before the pre dinner canapés.
We dined in the Gilbert Scott restaurant and breakfasted in the club house. I had muesli first and considered that a truly rich man might probably snack at it and leave. I toyed with the thought, and then loaded my plate with smoked salmon, rye bread, scrambled eggs, crispy bacon and syrup, sausage, and three chunks of some expensive looking cheese. My stomach would suffer - possibly not so much as our Current Account.

PS they didn' t have hand driers - not even the Dyson Airblade Mark V. Thick white towels and fluffy towelled slippers were the order of the day.

It all looks so sumptuous!

Someday I'd like to treat myself to a 5 star hotel, but probably not this year. :)

Greg says if I ever spent that much money it would kill me.

There are so many treats around London that you wouldn't think exist. For any normal commuter into London, the route usually takes you into Kings Cross and then straight down into the underground (or for me anyway) but just around the corner lays this spectacular structure that most people missed. St Pancreas. And as you say, definitely something out of Downton Abbey and Hogwarts...

Sumptuous? It was sinful, Maria. But what is life without the occasional sin. You're dead an awful long time :)

Dawn, I know what you mean. A friend of my daughter's mastered the underground to such good effect he rarely came up for air. My daughter preferred walking and saw so much more. Mind you, London is so big now I doubt even Charles Dickens would have carried on those marathon walks of his had he lived now.

St. Pancras? Anywhere near the Isles of Langerhans?

You're a bloody pain, Crash - first of all I have to look up the Pancreas and learn more than I wanted to know. And then, of course, I had to look up THE Saint Pancras - martryed at the age of 14 by Diocletian and whose name means "the one that holds everything". Quite a fitting term for such a large and splendid hotel though :)

Nice information, valuable and excellent design, as share good stuff with good ideas and concepts, lots of great information and inspiration, both of which I need, Very good points you wrote here..Great stuff...I think you've made some truly interesting points.Keep up the good work.
free car removal hobart
cash paid for cars hobart

Wonderful blog post. This is absolute magic from you! I have never seen a more wonderful post than this one. You've really made my day today with this. I hope you keep this up!
car removal brisbane
car removal in brisbane

Truly, this article is really one of the very best in the history of articles. I am a antique ’Article’ collector and I sometimes read some new articles if I find them interesting. And I found this one pretty fascinating and it should go into my collection. Very good work
Cash for Cars Wollongong

I am always searching online for articles that can help me. There is obviously a lot to know about this. I think you made some good points in Features also. Keep working, great job.
Cash for Cars Victoria
Cash for Scrap Cars Victoria