William Cross, ardent chronicler of dead aristocrats, noble, depraved and some mildly mad, has struck a rich seam of gold with his latest book: Sketches ofEvan, Viscount Tredegar, ‘Lord of the Lies.’ I read it in one sitting and found myself once more in the rarified air of interwar decadence. The great strength of this book is its carefully curated first hand accounts of Evan Morgan from friends and enemies alike, all of whom captured different aspects of a highly complex man: sexual predator, Satanist, raconteur, generous and funny, loyal to his friends and spendthrift. An aesthetic composite of Harvey Weinstein and Oscar Wilde with more money than sense might be stretching it, which is why it is probably better to read the book and judge from those who knew him.

What you will get are some beautifully evocative memories of a man and his world. It is a book of wonderful anecdotes.
I fell in love at once with Lady Helena Carnegie, Evan Morgan’s aunt, with  a foible that has much to recommend:
‘Lady Helena had one peculiar habit which always fascinated me. She rarely drank anything but whisky, and would always have three glasses by her plate containing mixtures of various strengths, one being practically neat whisky, one practically all water, and the third and largest of normal strength. I have never discovered whether this was a common practice of in Scotland or just a personal foible of Lady Helena’s.’ Cyril Hughes Hartmann. 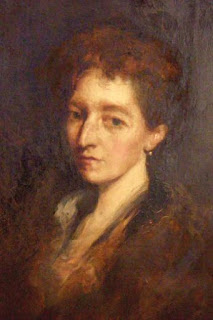 Cecil Roberts offers a wonderful example of dinner party chatter:
‘On the day of Ethiopia’s surrender, I went to Tredegar House for the weekend and as before, the company was large and festive. After all, Addis Ababa was a long way from Wales. “Poor little man, (meaning Emperor Haile Selassie) . .. He’s rather sweet, isn’t he, but why did he take on the Italians?” asked a bejewelled lady at dinner. Everyone agreed he was rather sweet, and the subject lapsed with the soufflé.’

Among Evan’s large menagerie, including a boxing kangaroo, were two parrots, one named Peter, the other Blue Boy. It is hard to distinguish a favourite. Certainly Peter had the foulest tongue, once telling a high ranking prelate to Fuck Off. According to Robin Bryans, a long standing lover of Evan, Peter’s favourite words were: ‘Titty titty, Cunty cunty, Show a cock, show a cock, and Nice big cocky, nice big cocky.’ Blue Boy on the other hand was more physical, prowling the floor and biting ladies’ ankles.

All the accounts pay tribute to Evan’s lavish hospitality, his insistence that every room be stocked with every kind of drink. Mind you, nothing comes free in life.

Desmond Leslie recounts: ‘Later, should the party bore him, Evan would liven things up a bit by setting his ‘gorilla’ (monkey) loose indoors. A great stampede would follow. Everyone fled to their rooms and barricaded their doors. Silence descended upon the great house, broken only by the padding of anthropoidal feet along corridors.
When this palled, Evan would send it a powdered footman bearing a doped tit-bit on a George II silver salver. The trembling flunkey would enter, bow, toss the morsel at the monkey, bow again and run like hell. Soon a resounding thud told us the creature had keeled over’ It awoke in its cage the following day with the mother of all hangovers.

A rare picture of young Evan observing the royal posterior. It went downhill after that. 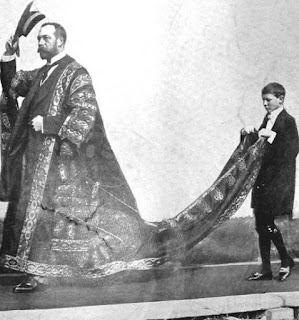 Just how do you reconcile, a Papal Knight, a Satanist, a sexual predator with a penchant for boys and Desmond Leslie’s summing up?

‘I think he was one of the kindest men I ever met. Immensely generous and trusting. He was deeply hurt when those he loved robbed or betrayed him. The po-faced condemned his eccentric lifestyle. But I feel that heaven would be a very dull place without him.’