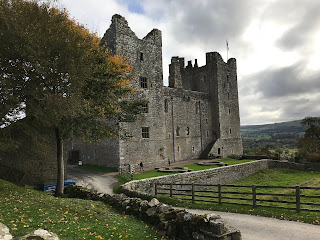 In these days of lockdown, happier memories must suffice.

Bolton Castle was built between 1378 – 1399 for Richard le Scrope, both a soldier (he fought in every major battle between 1346-1384) and Lord Chancellor to the unfortunate Richard II. It’s basically a fortified house with square angled towers enclosing a courtyard and guards the entrance to Wensleydale and its glorious cheese.

One small peculiarity are its spiral stairs. In all other castles they spiral upwards is in a clockwise direction. This allows the defenders maximum sword space in combat - at the expense of those swinging against the spiral. In Bolton Castle the spiral upwards is anti clockwise. 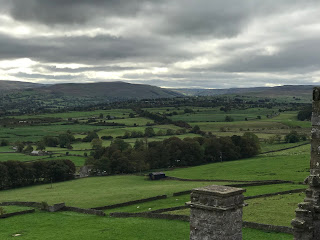 View from one of the towers. Note the glorious Yorkshire sky

Richard Scrope died in 1403 and in his will left 13s 4d to every resident of the county and 2s to every prisoner in of York gaol. 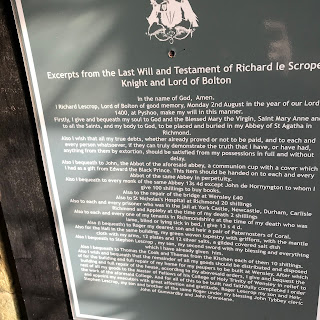 Speaking of prisoners, Castle Bolton’s most famous resident albeit for 6 months was Mary Queen of Scots. After being turfed out of Scotland, she fled to England with as good a claim to the throne as Elizabeth who promptly ‘guested’ her in Carlisle Castle before moving her on to Bolton Castle where she stayed for six months. She was moved to a more permanent residence in Tutbury from where after seventeen tedious years she mislaid  her head.

As prisons go, Bolton really was a holiday camp. She had her own chambers in the South West Tower with a retinue of 51 people, 36 of whom lodged with her in the castle, the remainder in lodgings nearby. Reading the full list, I was struck by the mysterious ‘Two English Sisters,’ and the fact that she had her own apothecary, a surgeon, a ‘reader’ three laundresses, four grooms and the even more mysterious ‘two others’. 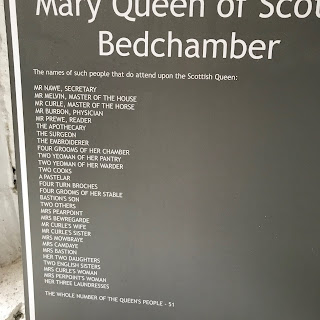 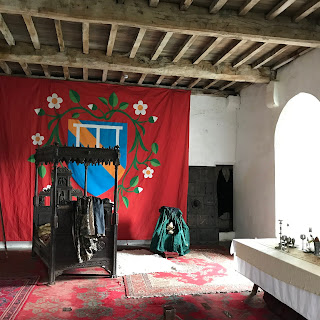 Mary's chamber, but not the bed Mary slept in. It is even more exciting than that. It is haunted and passed on to the perhaps disbelieving Scropes a little time later. It terrified the original owners, no one could sleep an entire night on it without experiencing hallucinations and horrible nightmares. It's been exorcised twice. 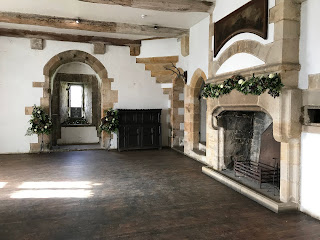 The Great Hall where Mary spent most of her day. The niche to the right of the hearth was where she warmed her wine. 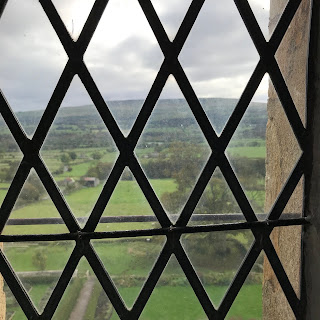 These three window shots held me for some time: the thought that Mary would have spent perhaps hours staring out at a landscape little changed. 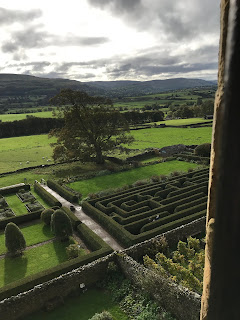 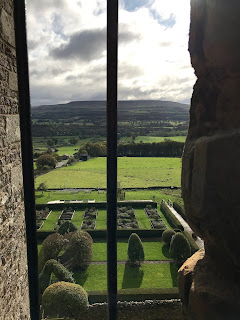 Furniture and tapestries were borrowed from other houses, and Elizabeth herself lent her some tableware and a kettle. During her six months ‘imprisonment’ Mary was allowed to go hunting and even meet up with local Catholics dignitaries – much to the displeasure of Elizabeth’s ministers—perhaps rightly so. Legend has it that Mary tried to escape, once getting as far as Leyburn Shawl, so called because she reputedly dropped her shawl there. It's also known, 400 years or so later, as Queen's Gap. Some dispute the legend citing the fact that nothing was reported back to the Queen's Council. Then again, it's easy to see why they might not report such a profound security lapse. Still, Elizabeth's ministers may have heard something. In the midst of a snow blizzard, Mary was removed to Tutbury where she spent the rest of her seventeen years. 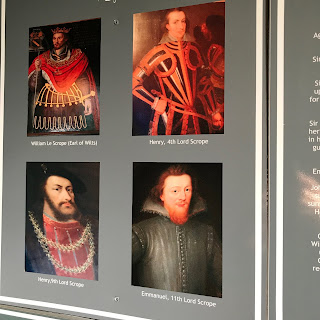 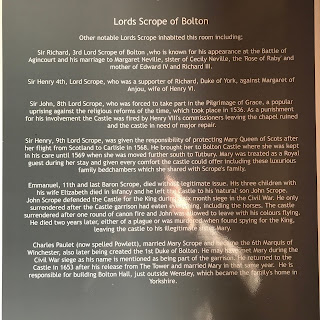 The Castle fell into rapid decline during the English Civil War when the young John Bolton (a teenager) supported the losing Royalist cause. The castle was besieged by the Parliamentarians for a year reducing those inside to eating their own horses before surrendering in 1645 from starvation. The entire N. Western side of the castle was ‘slighted’ ie reduced to ruins to make it unusable. As ruins, they convey their own unique romance. 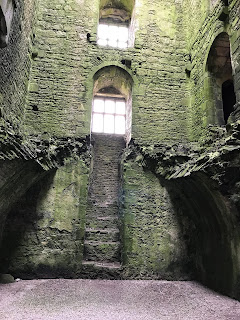 Note the remnants of the heavily buttressed lower roof. The ground floor was built to protect against fire that might otherwise spread more quickly to the upper apartments. 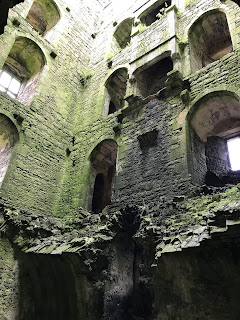 Enroute to the guardroom 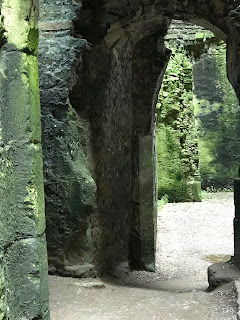 Unlike these picturesque ruins, the  S. Western part of the castle survived largely intact and is still owned and managed  by descendents of the Scropes.
Posted by Mike Keyton at 05:00

My retinue consists of a border collie, a giant rottweiler, and a man servant who expects 3 meals a day. There's a cat too, but he thinks we're his retinue.

My retinue consists of a bunch of imaginary friends