What have the Chinese ever done for us? The thought occurred someway down Osbaston Lane. There’s no getting away from it. China has history; it has millions of bright and inquisitive minds, their students the lifeblood of British private schools and the source of indecent salaries for those who run our universities.

But what have the Chinese ever done for us: apart from giving us, Silk, Dim Sum, gunpowder and paper, kites, a wall that can be seen from the moon, 5G, Huawei, Wuhan flu,  Fu Manchu — and now Asian hornets. 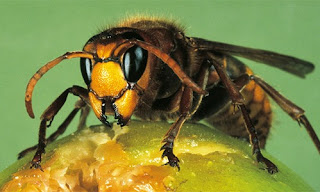 They arrived here from France, perhaps via garden plants, and have colonised large swathes of Southern England, perhaps even Wales. We’re a multi-cultural society, but you have to draw the line somewhere, and that my friend is the Asian Hornet, Vespa Velutina to its friends. 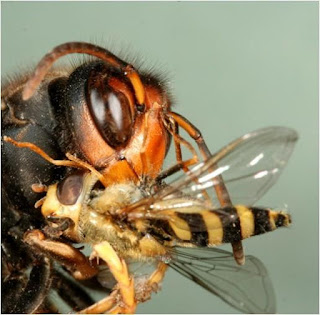 They devastate hives. These Asiatic marauders lie in wait and attack, decapitating the hapless bee and bringing back what’s left as food for the nest. Our bee population is endangered. But resistance is growing in the form of a new Home Guard, posses of beekeepers scouring the countryside for the first signs of an alien nest. They hide behind bushes—some camouflaged—tracking these hornets in an effort to locate their nests and destroy them before the queen flies off and begins all over again somewhere else.

With these thoughts in mind, I turned a corner in the lane and came across . . .

A member of the new Home Guard cunningly disguised as a tree stump, the fungus accessories a nice touch, I thought. I saw the face at once, a face set in bark, sternly scanning the forest for hornets. 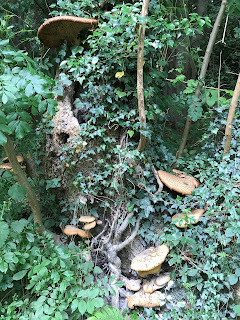 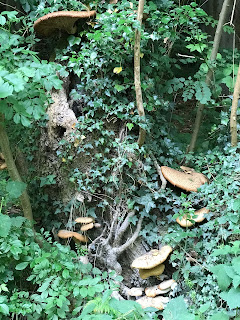 But so, unnaturally still.

And then I realised. This had once been human, a fellow traveller like myself before impregnation by alien spores.  Osbaston hides secrets darker than any in China.
Posted by Mike Keyton at 11:55