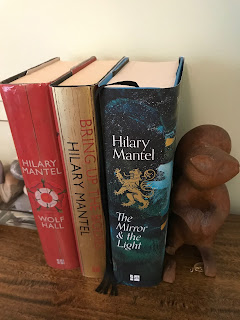 At the start of lockdown, I went off social media, abandoned the blog and lost myself on vacation in the C16th: Thomas Cromwell’s England. It took about a day to switch off my magpie’s love of distraction that a click here and click there immediately satisfies; it’s a life-draining itch. Settling down to read Mantel’s ‘The Mirror and the Light’ demanded much and gave in return. It's both compelling, subtle and dense. This for example:

‘Don’t look back, he had told the king: yet he too is guilty of retrospection as the light fades, in that hour in winter or summer before they bring in the candles, when earth and sky melt, when the fluttering heart of the bird on the bough calms and slows, and the night-walking animals stir and stretch and rouse, and the eyes of cats shine in the dark, when colour bleeds from sleeve and gown into the darkening air; when the page grows dim and letter forms elide and slip into other conformations, so that as the page is turned the old story slides from sight and a strange and slippery confluence of ink begins to flow. You look back into your past and sasy, is this story mine; this land? Is that flitting figure mine, that shape easing itself through alleys, evader of the curfew, fugitive from the day? Is this my life, or my neighbours conflated with mine, or a life I have dreamed and prayed for; is this my essence, twisting into a taper’s flame, or have I slipped into eternity like honey from a spoon? Have I dreamt myself, undone myself, have I forgotten too well?’

Sitting with a fine Madeira* – a half-bottle left over from Christmas – was one of many golden moments and knocked Twitter into a cocked hat.

As with Wolf Hall and Bring up the Bodies, I was struck with modern day parallels. Then the burning issue of the day was breaking with the Universal Church of Rome and the vested interests within England that sought to maintain our connection. Today it is Brexit.
Today it is Covid 19. Then it was the ‘Sweating Sickness,’ which appeared out of the blue and within a century burnt itself out.  Reputedly it came into the country via French mercenaries fighting for the future Henry VII, although where they’d contracted it from remains still a mystery. It was called the ‘English Sweate’ precisely because it appeared nowhere else. How come we got to be so lucky?
The disease itself was devastating, its victims dying within the day by . . . sweating. In anyone outbreak it would kill thousands and is graphically described by a French physician in England.

“We saw two prestys standing togeder and speaking togeder, and we saw both of them dye sodenly. Also in die—proximi we se the wyf of a taylour taken and sodenly dyed. Another yonge man walking by the street fell down sodenly.”
“And this sickness cometh with a grete swetyng and stynkyng, with rednesse of the face and of all the body, and a contynual thurst, with a grete hete and hedache because of the fumes and venoms.”

The 1485 outbreak began in September and had gone by October. It reappeared in 1507, then again in 1517. In 1528 it also hit parts of Europe but to a much lesser extent. The last great outbreak was 1521 and then it ceased to be.
Thomas Cromwell lost his family to it, and the king was so terrified of catching it, messengers were sent ahead on any Royal Progress, and he’d change direction immediately at the merest hint of its presence, even – during the 1528 outbreak—abandoning trysts with Anne Boleyn at the height of his ardour. She, apparently, survived the ‘sweating sickness’ but not the axe.

The king had reason to be cautious. Unlike Covid 19, sweating sickness was a young man’s disease. The very old and the very young were normally spared. It was also, for some reason, a rich man’s disease and severely affected nobles living in London and the students of Oxford and Cambridge. In the words of the Chronicler Edward Hall:

“Suddenly there came a plague of sickness called the sweating sickness that turned all his [the King’s] purpose. This malody was so cruel that it killed some within two houres, some merry at dinner and dedde at supper. Many died in the Kinges courte. The Lorde Clinton, the Lorde Gray of Wilton, and many knightes, gentleman and officiers.”
In theory, an affected house would be in isolation for 40 days but there is no real evidence of serious lockdown. With no social welfare or furlough schemes, business continued as normal.
Another passage I particularly liked illustrated the harsh reality of Cromwell at work, along with a description of a particularly loyal servant, the young Rafe Sadler:

‘Never in time for meat or sleep or prayer; always leaving and arriving in the dark, heaving himself onto a steaming horse: a winter of fog and wet wool and rain cascading from slick leather. And Rafe Sadler as his side, drenched, frozen, and shivering like a greyhound whelp, nothing but ribs and eyes; bewildered, bereft, never complaining, once.
It is another foggy day, and it has not lifted by afternoon: rain just holding off, but the air as damp as if the afternoon has been rubbed by snails.’

That last line in particular.

The book is full of insights, in particular the nature of continuity and change.  Hackney now, is not particularly pretty, then it was a place of green meadows and crystal-clear springs – and also the site of the older and wealthier Rafe Sadler’s fine new mansion ‘Bricke Place.’ You can still go to ‘Bricke Place.’ Yes, is now called Sutton House, has a Georgian frontage and some beautiful Jacobean panelling inside, but the building is essentially the same that Rafe Sadler had built. 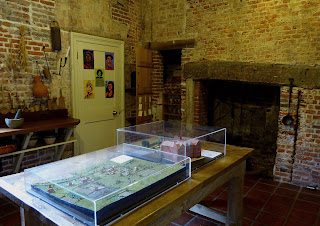 The kitchen with two models - Hackney then, and the house 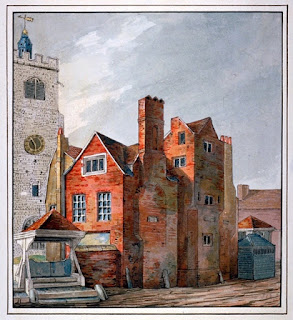 A much later painting of the house 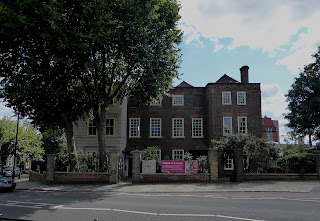 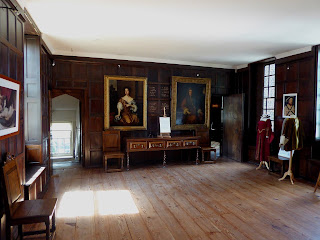 The Great Chamber
Tudor politics were brutal, loyalties changed with a blink and a smile. You know Cromwell’s ultimate fate, its undercurrent as relentless as any Greek tragedy, but it still hits you with a shock, partly because of the sociopathic treachery of those largely responsible. Politics is still treacherous but for the moment less brutal.

*The Madeira ran out quickly and was followed by tea. Not so good.
Posted by Mike Keyton at 03:00