In theory, you are able to walk the entire coast of Wales, something I’m unlikely to try, though last week we managed an eight mile stretch along the Gwent levels ending our walk at Redwick.  When you look at these pictures, it’s hard to imagine that the earliest coastal defences built by the Romans and maintained and developed by the monks of Goldcliffe and Redwick extended farther into the sea. The present line of defence was built in the late middle ages but were allowed to fall into disrepair after Henry VIII’s dissolution of the monasteries. 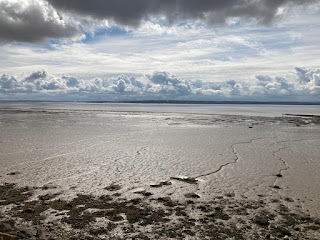 This looks so peaceful. Hard to imagine anything bad could possibly happen. On the other side of the channel is Bristol and Somerset. 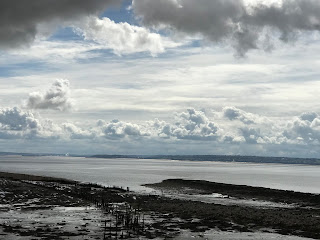 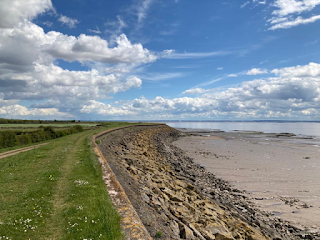 A section of the modern sea defences stretching mile upon mile to Chepstow.
Courtesy of Bernadette..

Mind you, they probably would have made little impact on what occurred on the morning of Tuesday, 30th January 1607. A twenty-five foot wall of water sped up the Severn estuary at 38 miles an hour – faster than a man could run.  It crashed through the sea defences from Peterstone to Redwick and beyond, hurtling  up to four miles inland.

In the words of William Jones of Usk: ‘huge and might hilles of water, tumbling over one another, in such sort as if the greatest mountains in the world’ overwhelmed the land. More than 2000 people drowned and 2000 square miles of farmland were destroyed along with much of their livestock. William Jones went on to describe the spectacle: ‘Sometimes it so dazled the eyes of many of the Spectators, that they immagined it had bin some fogge or miste, comming with great swiftness towards them: and with such smoke, as if mountaines were all on fire.’

Today, especially in light of William Jones’ description, academics argue as to whether it was a tsunami or merely a freak storm surge, though the day was sunny and bright. Jones had no such worries. The explanation was clear. It was God’s warning to his people…Many men that were rich in the morning when they rose out of their beds, were made poore before noone the same day: such are the judgements of the Almightie God, who is the geure of all good thinges, who can and will dispose of them . . . at all times, according to his good will and pleasure, whensoeuer it shall seeme best unto him.’

I confess, my auto spell is going berserk here, but William Jones’ account is so lively, I must give him free rein.

‘…as soone as the people of those Countries, perceived that it was the violence of the Waters of the raging Seas, and that they began to exceede the compasse of their accustomed boundes, and making so furiously towards them, happy were they that could make the best and most speed away, many of them, leaving all their goods and substance, to the merciles Waters, being glad to escape away with life themselues: But so violent and swift were the outragiouse waves, that pursued on an other, with such vehemencie, and the Waters multiplying so much in so short a time, that in lesse than five houres space most part of those cuntreys …were over flowen, and many hundreds of people both men women, and children were then quite devoured by these outrageous waters, such was the furie of the waves of the Seas . . . 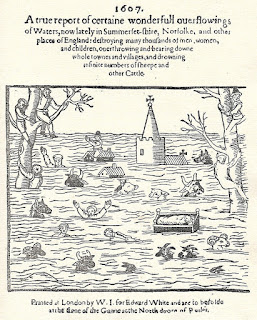 Many there were which fled into the tops of high trees, and there were inforced to abide some three daies . . .without any victuals at all, there suffering much colde besides many other calamities . . . beholding their wives, children, and servants swimming remediles of all succour in the Waters. Others some sitting in the top of Trees might behold their houses overflowne with the waters, some their houses caryed quite away: and no signe or token left there of them.’

‘Gods warning to his people of England By the great over-flowing of the waters. . .’ by William Jones 1607

Mind you, there is another explanation bypassing storm surges, tsunamis and God. Whatever the case,

the immense waves would have badly damaged the complex pattern of reens draining the 1500 kilometres of wetlands, some of which are 2000 years old. This is a modern 'Stank' altering the level of a section of the reens. 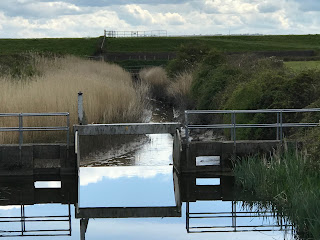 I love the optical illusion, but then I'm a simple soul. 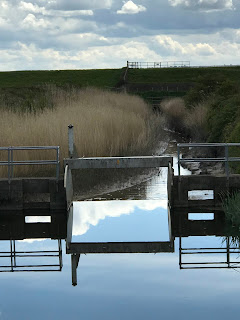 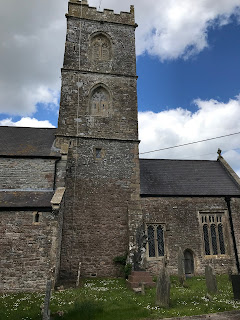 This is St Thomas's Church, differently named in the C13th and with the tower, unusually in the centre of the nave. 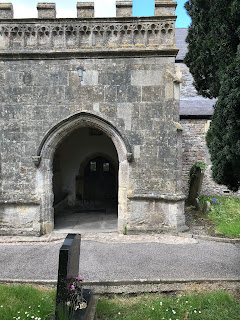 This is the porch from some distance away to allow perspective. Note the gargoyle to the right where the arch ends. 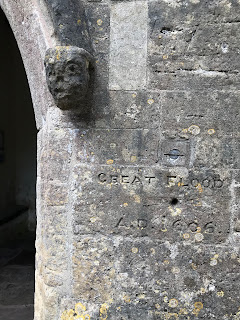 Now, look at the plaque marking the height of the flood. 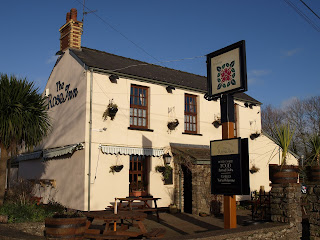 The Rose inn and a welcome pint of Marston's Pedigree. My first pub pint since lockdown began.
If William Jones were alive, he would write about it.
Posted by Mike Keyton at 04:53