I remember reading Middlemarch as a seventeen year old, eager to impress my first girlfriend. I remember, too, being repelled and afterwards scared by Edward Casaubon, the pompous, withered middle-aged academic who married the idealistic heroine, Dorothea Brooke; she sees in him her idea of a real intellectual. Casaubon is currently amassing material for his masterwork the ‘Key to all Mythologies,’ his aim, to show that all the mythologies of the world are corrupt fragments of an ancient corpus of knowledge, something he will reveal in due time. Dorothea is enthralled to be his helper, compiling and editing, putting every scrap he's written in some kind of order.

Too late, she realises she’s married a dud: ‘Somebody put a drop of his blood under a magnifying-glass, and it was all semicolons and parentheses.' It might be that there is/was no key to all mythologies and that the answer to everything is to be found in The Hitchhiker’s Guide to the Galaxy, ie 42. But poor Edward Casaubon never finds out. He dies having written nothing but leaving behind copious notes.

It may be the fictional Casaubon and those of similar ilk derive comfort and purpose, a sense of security in the effort alone. Rather like the Hermit crab with its need for the shell of a dead mollusc to protect its vulnerable rear end. (I feel a joke coming on) The cannibalised shell serves as both home and protection. But at a cost. It’s something the crab has to drag along wherever it goes. And when it grows too large for the shell, it has to start all over —little different perhaps from those on the mortgage treadmill.

So, what has all this to do with recipes and cookery books? I’m awash with recipes and books. It began at Catering College all those years ago. Little did I know then where it would end up. 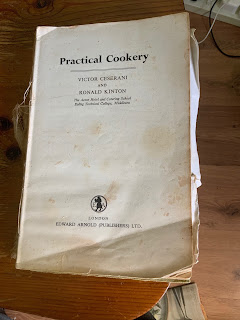 The book has been thumbed, stained and used 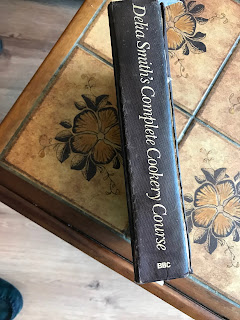 Then the ‘Blessed Delia’ came along.

Since then there’s been no holding back. I have folders on my desk-top, folders in my email. I have all these and more. 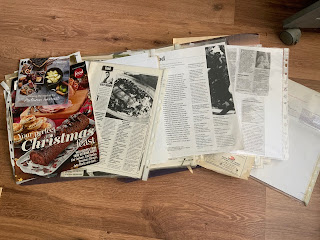 And like most people, I suspect, there are just two or three recipes in each book that have been actually used. The ‘Google’ cookbook has become the cuckoo in the nest. But, like the Hermit Crab, I cannot bear
parting with what I increasingly don’t use. 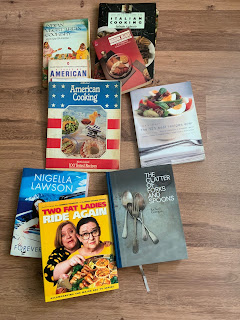 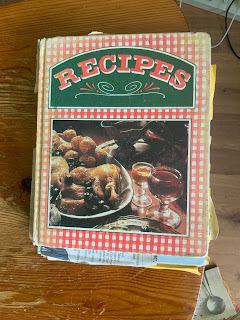 In theory, any recipe that ends up in here is a keeper.

In theory. The reality is that any recipe ending up in here is forgotten. Is the thing I'm after in one of my folders, or do I have to thumb through the sacred, sauce-spotted book? 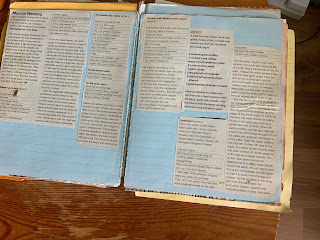 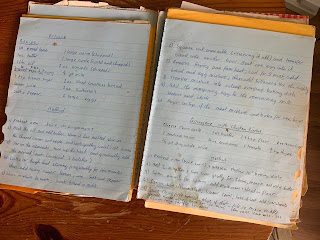 I keep promising myself I will—and here the ghost of Edward Casaubon looms over my shoulder— systemise my recipes in an all-encompassing computer program, one that will bring the exact recipe needed for any occasion at the tap of a key word on iPad or phone.

It’s a nonsense of course. I’d be too busy doing it to do any actual cooking and, like Casaubon, be dead before the ‘key to all cooking’ was actually in place. Then again, there would be far less washing up to do.

I donated a large stash of cookbooks a few years ago. And even though I have looked at the remaining cookbooks in years, I keep them for sentimental reasons. The early ones helped a very novice cook learn the basics.

My computer database of recipes is a different matter. That one is very well organized and labeled by type. A simple keyword search brings me to whichever recipe I'm looking for.

While the database is extremely efficient, I miss my old cookbooks. I don't know why. Maybe because it reminds me of a simpler time.

That’s the difference between you and me, Maria. You are no Casaubon. You can create a data base without it taking over your life - you do that AND cook, because you’re a do-er. My over riding fear is being a Casaubon, substituting doing for the perfect data base of recipes. Know your weakness and avoid it. ��

No lamb in Bobotie I had cooked for me in South Africa!!!

Beef and lamb are interchangeable. He original Indonesian recipe refers to minced meat. But kudos to you for checking out the sauce splattered recipe book ��