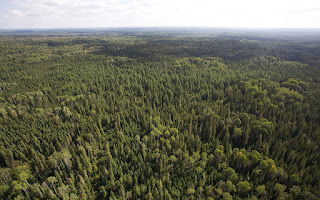 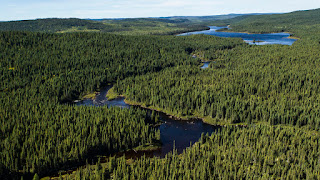 I’ve just finished a wonderful book, Barkskins by Annie Proulx. It’s essentially a paean to a primeval wilderness, the once great Canadian forest. It’s a paean to trees in general, men coming out as both indomitable and grubby. The great despoilers. The book itself follows the James Michener-Centennial/Edward Rutherfurd Sarum pattern, ie tracing the story over generations.

In this case, the story begins in 1693, two impoverished indentured  servants arriving at a remote river settlement in New France. Rene Sel has experience in cutting down trees, Charles Duquet has less going for him, a scrawny weakling from the Parisian slums, who during the long voyage was to be found folded up in a corner like a broken stick.

On landing, they look for their new master.

‘Mosquitoes covered their hands and necks like fur. A man with yellow eyebrows pointed them at a rain-dark house. Mud, rain, biting insects and the odour of willows made the first impression of New France. The second impression was of dark vast forest, inimical wildness.’

These are the men who begin their first nibble at what they see as an inexhaustible supply of wood. Their employer is Trepagney who needs extra hands to cut down more trees. Dusk is descending and they follow him into the forest.

‘They plunged into the gloomy country, a dense hardwood forest broken by stands of pine

. . . In a few hours the sodden leaf mould gave way to pine duff. The air was intensely aromatic. Fallen needles muted their passage. The interlaced branches absorbed their panting breaths. Here grew hugeous trees of a size not seen in the old country for hundreds of years, evergreens taller than cathedrals, cloud piercing spruces and hemock. The monstrous deciduous trees stood distant from each other, but overhead their leaf-choked branches merged into a false sky, dark and savage.’

Within generations everything changes. Rene Sel marries a Mi'kmaq widow, his descendants half native half French. Through their eyes we see the relentless degradation of the native tribes in line with the destruction of the great forest. Charles Duquet on the other hand reveals a drive and cunning which leads to the foundation of the first great tree felling company. The despoliation of the wilderness and exploitation of natives and desperate immigrants that follows are seen through the eyes of his descendants, all of whom manifest his drive and cunning to different degrees.

The prose is lyrical and dense, the characters subtly portrayed so that they stay in the mind. The immediate comparison must be Rutherford’s Sarum, which I enjoyed well enough, but there I was always aware of historical ‘set pieces’ like, for example, when the plague arrives. There is none of that predictability in Barskins, other than the relentless pressure on forest and those who originally lived there. These are replaced by new cities like Detroit as the drive for timber takes them further and further west, and throughout, you become increasingly angry at the vandalism and great waste - of both men and trees.

You also get a sense of the maritime tentacles of these new commercial empires, vignettes of China and the great Kauri trees of New Zealand that become the new field of gold for logging companies and missionaries. This for me was entirely new. I’d never heard of the Kauri before and the visual description of trying to fell them with a mere axe was breathtaking – understandable at a glance when you appreciate the size of the Kauri. 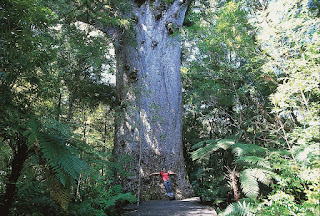 Second in size only to Sequoia, reaching heights of nearly 200 feet. A thousand year old kauri is counted as young 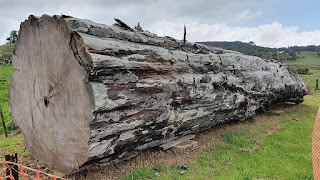 So, in all, a great and satisfying book. Perhaps a Fu Manchu novel for my next read.

This sounds like something I'd like. It's a little pricey for digital, but I left it on my Wish List in case it comes down in price.

I'm not a huge fan of (de)foresters but I do like reading a story seen through generations.

I know. It was you that recommended Sarum, I think. I thoroughly enjoyed the first part of that, and the genetics throughout. I did find the middle section a bit of a plodder. I have his book Forest on my reading list, but the book I rate most is Centennial by James Michener. Problem is, he flogged the formula to death with later books. I think Annie Proulx brings the formula alive again because it has a C19th density- if that makes sense