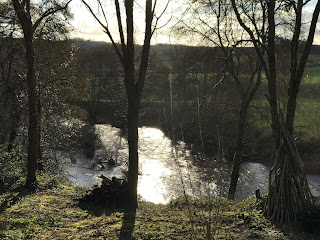 Along a lane we often walk, there’s a river on one side where sometimes otters play. On both sides of the lane are trees, the remains of ancient woodland. Recently, the owner of this woodland parcelled it into three acre lots and sold it. Being an unashamed nosey parker I took the first opportunity to quiz two of the new owners. It’s easily done. We passed them every day, coppicing and clearing unwanted trees. And the great thing about walking in country is that people are friendly, and everyone likes talking about themselves given half the chance.Or may be it's just me and it's why I have a blog  😎 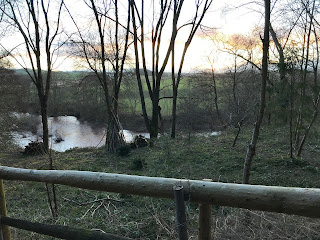 A compulsive viewing spot before girding our loins for the walk back home. 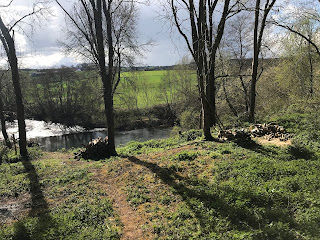 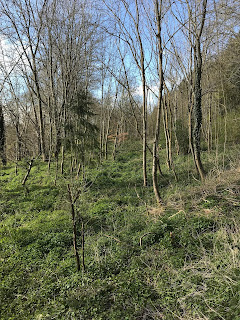 One of the men was in his seventies with 70k going spare and rather than blow it on a car he didn’t need or an even newer kitchen, he decided to buy three acres of land facing the river. His aim was to clear a small glade, plant wildflowers and create a viewing spot for himself and his wife. For a man in his seventies, he’s admirably energetic, thinning trees and planting more interesting but traditional alternatives.

The second guy—on the other side of the road—was equally interesting. He is much more the committed woodsman, there virtually every day, chopping down unwanted trees. At first glance it looks like vandalism. In fact, it’s enlightened forestry work.

The wood has overgrown, packed with sickly trees enjoying little light. A lot of the trees are unhealthy pine. His aim is to thin, thin, thin; allow sunlight in and, like his neighbour replant with traditional broad-leaf trees. 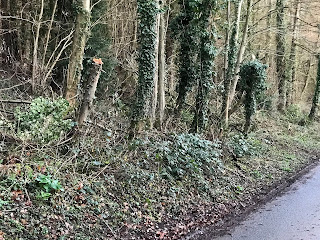 This gives some indication of how sickly and light starved the trees are. 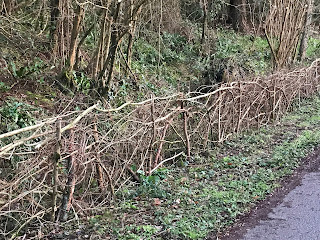 I loved his attention to detail, constructing a traditional woven fence marking his boundaries. 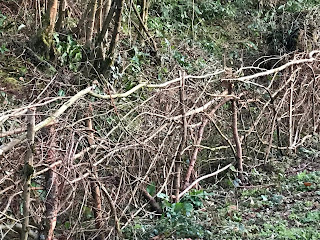 And below, you can see the next stage, planting along the edges for when the fence decays. 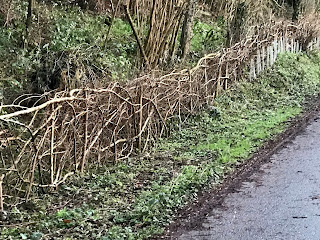 Of course, it put me in mind of Annie Proulx’s Barskins. It also put me in mind of an article I read on Ruislip Woods, a small forest in London. It’s what remains of a vast forest that once stretched from London to Nottingham. The remnant is still large and has survived largely unchanged from medieval times. 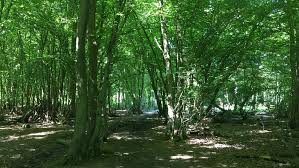 The forest was given to Ernulf de Hesdin by Willliam the Conqueror but later came into the hands of the periodically insane Henry VI who gave it to King’s College Cambridge.  The great oaks of Ruislip were used in the building of the Tower of London, Windsor Castle and the Palace of Westminster. And something else, I learned. Hornbeams were planted amongst the oaks to make them grow straight and tall. Wonderful things, trees. The hornbeam grows more quickly than the oak, and so to claim their share of the light, the neighbouring oaks have to grow straight and tall to avoid missing out. Having done their job, the supple branches of the hornbeam were used in the making of fences.

Things changed in 1914 when the Local Authority began the process of chopping it down to make way for 7,600 houses. But, luckily for the trees though not the luckless soldiers, World War I brought things to an abrupt halt and Ruislip Woods were saved.

Having had such a narrow escape, King’s College sold the woods to the local authority in 1931 on the condition that no building would be allowed. The council were as good as their word, coppicing the woods on a 20-year cycle and cutting out unwanted species. And so, what you have is a forest of hornbeam and oak, one that a Norman, a thousand years ago, would recognise. 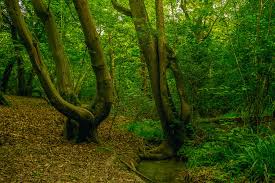 I'm impressed by both your neighbors. I hope I'm equally agile when I reach my 70s, and a better gardener/forester. I'm such a novice in so many areas.

Maria, I'm remiss, I thought I'd answered this and I hadn't. Apologies. Suffice it to say I think you'll still be searching for telephone boxes to change into your superwoman costume when you're in your seventies. No problem there.

Susan, I owe the same apology just given to Maria. Encroaching absent mindedness is my only but not very flattering excuse. I must confess, I don't remember Cecil Price but then having just remarked on my errant memory, that's hardly surprising

That's ok. It's Barkskins by the way!

I know. Bernadette pointed out the slip. I’ve just been a bit lazy correcting it ��‍��

And it's wonderful. Just read it.

And it is wonderful. Just read it. Thanks for mentioning it.