In the early C19th, Old Sarum was a long-deserted Saxon village. And yet, as late as 1832 it sent two MPs to Parliament. These two worthies represented a few fields and hundreds of sheep. 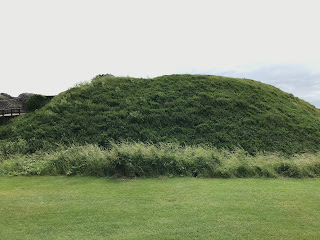 What you see is what you get. Well, there's a little bit more but not much 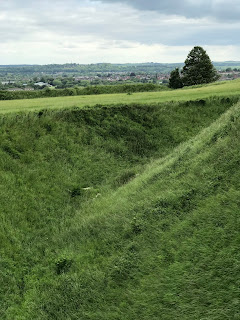 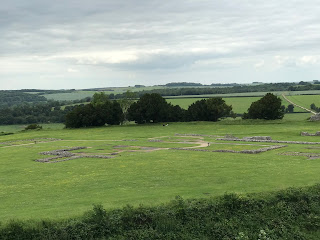 The foundations of the original cathedral from the Castle Wall. Really very close.

It wasn’t always thus. The original village was situated at the junction of two important Roman roads and with its Iron Age hill fort was well defended against Viking raids.  The Normans built a castle there and later a cathedral. 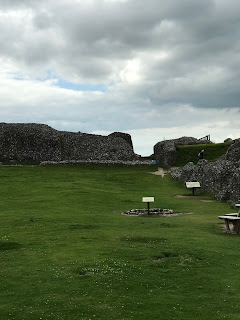 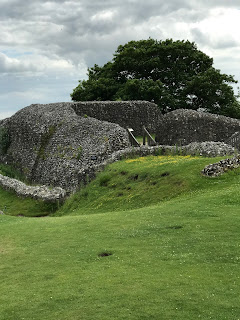 There's something so tactile about these old Norman walls. Up close you want to stroke them; a perfectly harmless past time.

Although you may not want to stroke the walls below. 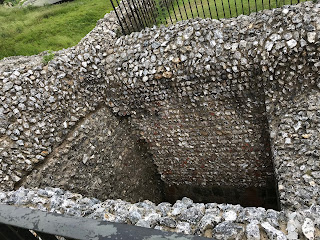 Hard to believe the castle was once a Royal Palace or that this was once a Royal Toilet. It couldn't be flushed with water; instead the waste fell into deep pits filled with straw and bark clippings. When the king was not in residence, someone would be lowered into the pit and dig out the contents ready for the next royal visit.

In the C13th it was a prosperous borough and merited the two MPs it sent to Parliament. Old Sarum declined because of one man, Richard Poore, Bishop of Salisbury between 1215 and 1237. He wasn’t fond of Old Sarum, thought it squalid and blamed the exposed plain, its winds and rains for the rheumatism of his monks. He also detested the lord of Sarum castle as ‘an ungodly man who commanded a garrison of vile and rude soldiers.’ This town literally wasn’t big enough for the two of them. 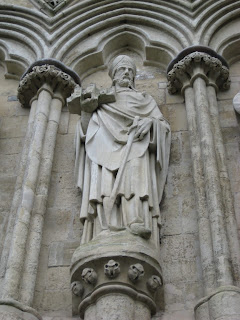 Being a man of God, Richard gets a statue. The commander of the garrison being an ungodly man gets nothing, though I imagine him as Sean Bean or perhaps Ernest Borgnine 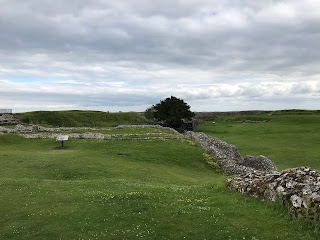 All that's left of the original cathedral.

So, Richard Poore moved, taking the cathedral with him. Well, not literally. The new cathedral was built a bowshot away on the floodplain of three rivers. The  rivers made for easy transport of raw materials, and it was Richard Poore who was largely responsible for the layout of Salisbury as it is today. 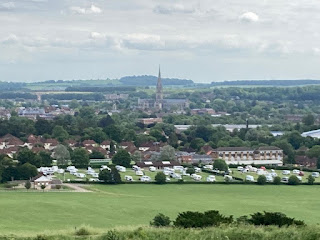 You can see the spire of the 'new' cathedral reputedly a bowshot away.

The original settlement should have faded from history, but it didn’t.

Fast forward to 1832 and Old Sarum remains in existence, a magnificent example of a rotten borough sending two MPs to Parliament even though no one officially lived there. Come election day, the forty or so electors were carted in, stayed overnight, and voted for the local landlord or highest bidder.

Mind you, it wasn’t all bad. The old hill and its sheep elected William Pitt the elder (1708-1778, and his son William Pitt the younger (1759 - 1806) who between them ensured the world dominance of Britain and the decisive defeat of our only real  competitor, France. One might compare it favourably with our present electoral system which regularly provides moral grandees like Keith Vaz and Bob Roberts. Rotten Boroughs or rotten MPs. Take your choice. Irrespective of 'democracy' and the virtues of a represented hill, MPs tend to reflect their society