Some of my best friends are vegans 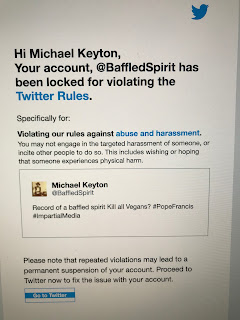 Earlier this week I was suspended by Twitter. The feelings were those of amusement, irritation. It was like being slapped by the damp hand of an elderly woman, and yes, I suppose, I was a little upset and surprised. Out of the blue I had become a rebel without a cause, minus the leather and bike, the naughty boy at the back of the class. Was this something to boast about, another item I didn’t expect to add to my bucket list? Was I now on a par with Nazis and Antifa? Part of the Orc deluge of hate and abuse you see daily on twitter?

Weird. With friends and family scattered across the world of all denominations and political hues – and every now and again trying to sell books—I go out of my way to avoid pointless squabbles.

Nothing offensive there, I thought so I looked at the two options available to me. Accept my bad and recant—just a click of the button to delete the tweet—or appeal. The pressure was all one way; to appeal came with the warning it might take some time. The siren voice, recant. It reminded me of the benign authoritarianism of the late medieval church. The Inquisition has a bad rap but they too allowed heretics to recant to avoid a worse fate. In fact, the Inquisition was better in one respect. They engaged with the 'heretic,' explained where he/she had erred. 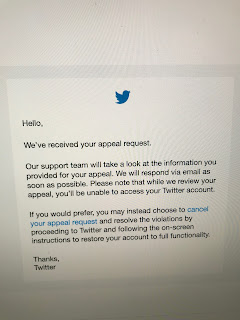 I appealed, convinced I was the victim of a rogue algorithm. Two days later I  got this 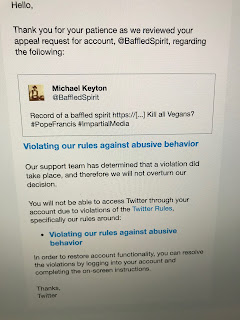 As far as I can see, there are only three possibilities:

1)    Twitter doesn’t understand the role of a question mark, irony or the point of a funny but harmless cartoon. Or maybe its confusing the question with the Australian/Californian inflexion where questions and statements become interchangeable.

3)    It is offended by any criticism of the media, even from one mildly annoyed resident of Monmouth.

One thing I don’t know is how these things work. Was it a rogue algorithm akin to those closely woven nets that catch fish they shouldn’t or had someone actually complained? If someone knows, please let me know. But then there's the fact that a moderator actually approved the algorithm or anonymous complaint, which leaves me dumbfounded.

I am annoyed even though it appears a relatively trivial thing. But harbingers by their nature appear trivial.

I have recanted in order to tweet this. When I do I shall of course change the blog heading 'Hidden Agendas,' perhaps. I mean, nobody in their right minds would suggest killing vegans.

I'm more ornery than you. I'd have left. Well...I did leave Twitter, but only because I was tired of seeing exactly this type of behavior done to others.

There are two ways of fighting. Leaving, thereby giving them less power over you. Or staying and getting your message in under the radar via an inoffensive title.

The questions you should be asking are: Who reads your posts directly from your tweets? Did they click the link because of the title or because they follow you anyway? Did anyone share your tweets? If you could get this information from Stat Counter or Google Analytics you'd learn whether Twitter was useful or not.

I can take or leave Twitter. It might sell me a book or two but not many. It's not as if I have a world wide following. Out of curiousity, I checked Stat counter on blogger and went to the map option to see where in the world had accessed that particular post. Couldn't find anything unfortunately. Well, life moves on and so do we. :)