Some problems cry out to be fixed even by the terminally stupid.

One of the things I remember about America (and it is a generalisation) is that if there is a problem ‘fix it,’ which was in sharp contrast with a tendency on this side of the pond to ‘live with it.’ Both options have their merits and drawbacks, but two weeks ago I cracked having lived with this problem for almost two years. 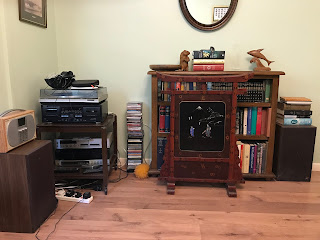 In 1982 I bought a then state-of-the-art High Fi. Technics with Kef speakers, and we lived happily together for many years. Five or six years ago, the sound became less hi fi and more hiss, and two years ago one of the speakers stopped altogether. As a result my once beloved Hi Fi gathered dust, I the philandering spouse lusting after strange women – in this case a Sonos Smart speaker and an Apple subscription.

But what to do with my once prized possession, now gathering dust in the corner? Surely, I could fill the space with a small bookcase, sell the system and with the money buy a new Sonos speaker?

I checked Sonos prices along with the rumour that they had limited lifespans in terms of necessary updates. I was good for five years at least, or so I was told—which didn’t impress. He also confirmed that though Sonos was good, the sound from a Kef speaker was far richer. Hmm. Had he heard my Kef speaker? I tried to remember when it had last sounded good. Next, I contacted a retail unit that dealt with second-hand Hi Fi. And my world came tumbling down. They were very, very sniffy. Didn’t want to know.

What to do? I wasn’t going to give it away. The only option left was to fix it. I’m a mean-minded but impractical soul, logic kept at some distance. Still, needs must. Discover the source of the problem and work on from there. It seemed to me the problem lay either in the speaker or the amp. 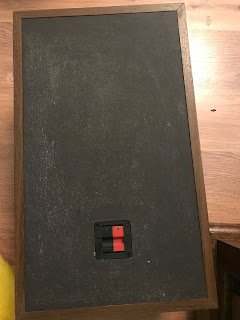 The naughty speaker minus wires.

And so, young Sherlock Holmes began his endeavours, swapping wires from one speaker to another—writing down the results—inconclusive. 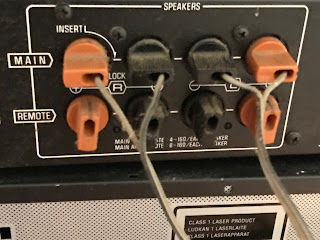 Sshh! Yes I know. They could do with some dusting.

Next, I attacked the amp, moving the two wires from the Speaker outlets to the two Auxiliary outlets. Again, nothing conclusive. Just a hiss and this time the other speaker not working. It was time to phone Hi Fi Western, the best retail Hi Fi in Newport.

He listened and asked how long I had had the wires.

There was a pause on the other end of the phone, which told me everything, including the fact I’m a fool

Suffice it to say, I have brand new far superior speaker wires and my system, like Lazarus, has risen from the dead. The sound is incredible. It’s like falling in love again. Some problems can be lived with, others cry out to be fixed.

Mike. Do you see me shaking my head over here? ROTFL!

But I got there in the end - my gravestone motto.

Bernadette was shaking her head too.