St Giles was an C8th hermit who lived in the forests surrounding Nimes and according to legend lived from the milk of a red deer. In protecting the deer against hunters he took an arrow in the leg and subsequently became the patron saint of cripples. I was pondering all this as we approached the church of St Giles a mile or so from Goodrich Castle. The earliest reference to the church was in 1196 but it was extensively rebuilt in the C13th  and C14th 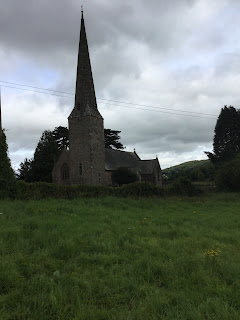 Thomas Swift, the grandfather of the more famous Jonathan Swift was the Royalist Vicar there 1624-58 and successfully hid the treasures of the church from marauding Roundheads; but what struck me was its windows, especially the super patriotic one below incorporating the Union Jacks and the legend of St George in a glorious burst of colour. No doubt in the near future some will soon demand its removal for one reason or another. 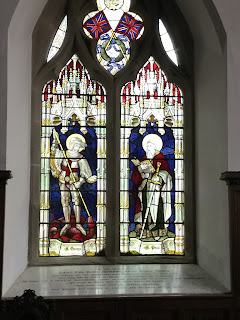 We wandered on, traipsing through cow pasture and cutting our way through nettle-infested paths. Herefordshire has many curiosities, including Ferris Wheels in the middle of nowhere – eat your heart out London Eye. 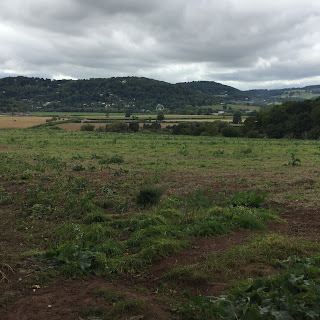 It also has Alpacas - in this case invisible ones or perhaps wearing camouflage. 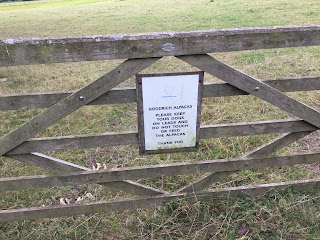 There are at least three Alpaca farms in Herefordshire, and you can, if you are that way inclined, go on Alpaca treks—just you and an Alpaca along with a collection of like-minded souls and the Herefordshire countryside.

Fresh from the walk we nipped across to the Forest of Dean to St Mary’s Church at Kempley. 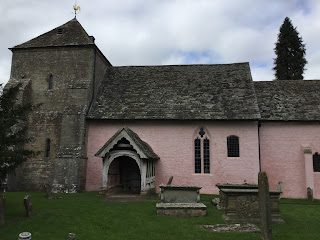 For those who need to know about these things, the church has the oldest roof in Britain and some of the finest wall paintings. These were ‘whitewashed’ during the Reformation when we had our own Robert E Lee moment. 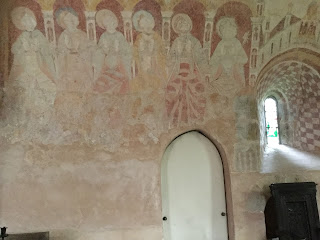 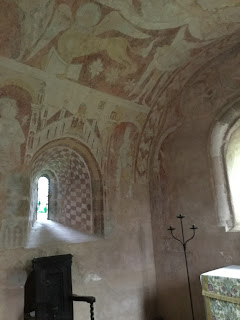 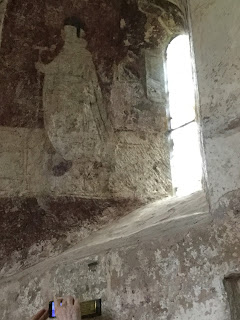 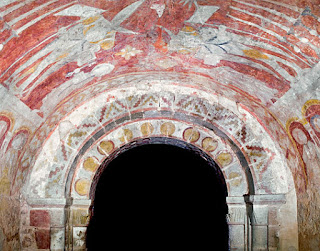 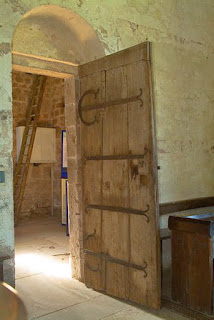 The three planked door above leads to the church tower and the wood is over 800 years old.
The church itself was begun in 1095 by Hugh de Lacy on the site of an earlier Saxon church and completed in the early C12th. The roof timbers date from 1120.

The wooden porch is also C12th and hides the even earlier Norman arch with its characteristic zigzag pattern. 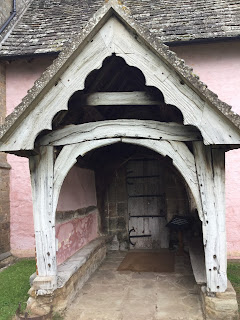 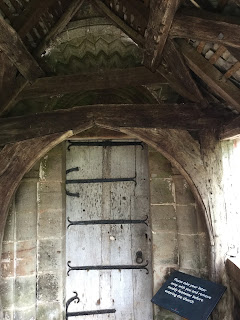 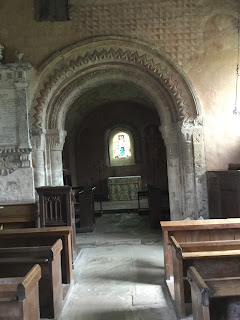 They say that walking through ancient woodland brings peace to the soul. The same is true sitting in silence in equally old churches. For those of a more robust disposition there is an alternative. The medieval village of Kempley has two Churches. Because of the marshy ground the village relocated a mile away where much later (1903) a second church was built – St Edwards, dedicated to the ‘Confessor.’ The poet John Betjeman praised it as a ‘mini-cathedral of the Arts and Crafts movement,’ but for me it needs another thousand years to mature.

And  finally for those who savour the macabre, in 1995 two bodies were found in nearby fields, the mortal remains of two victims of the serial killer Fred West.
Posted by Mike Keyton at 08:46

Do the owners of the pastures mind when you cross their property? Around here, if the bulls don't get you, the dogs will. :)

re: whitewashing
Someday, far in the future, some historian is going to lament to his class about the idiots throughout history that have destroyed, removed, or whitewashed historical artifacts to conform with their thinking.