Two weeks ago, on a Sunday, we met up with some friends in Abergavenny. The heavens opened in a deluge and animals wandered two by two in search of an Ark. No Ark that day, but we did find two pubs on the high street: The King’s Head, which was closed, and the Coach and Horses which was open. We huddled in shaking umbrellas and headed for a table next to an unlit fire. First impressions were good: a quiet, convivial atmosphere of locals enjoying the pint or five before the working week started. Most of them seemed to be drinking lager (this is the way my mind works) but I headed for the two ‘real ale’ pumps: Brains S A and Wadsworth 6X.

The S A used to be labelled Skull Attack, though it's long since lost the right to that claim. Skull Nibble might be more appropriate, but at least it has a taste. This particular pint had a metallic taste as though it had been in the keg since Boadicea or before.

I went for the Wadsworth 6X after that and the evening became just a little bit worse. The first sip told me everything, and I had a hundred or more sips to go. (I know, I could have just left it, but beers are only unfinished in Soaps)

I can’t say it tasted like bat-piss not even goat-piss, because until then I’d tasted neither, though I suspect goat-piss has more body. This thing tasted chemical and sweet, like the old and appalling Double Diamond but thinner.

What a difference a week makes.

The following Sunday we went to the Queens Head in Monmouth, a pub that provides live music twice a week and a pub that once hosted Oliver Cromwell who may not have approved. 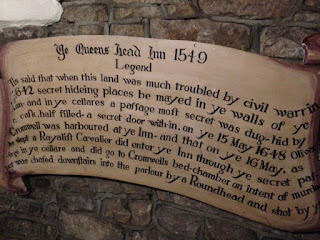 I chose a Wye Valley brew,‘The Hopfather.’ The first sip . . . I groaned. Groundhog day, and I definitely couldn’t take the beer back since it had been bought for me, and the act would have been doubly ungracious. I sipped very slowly girding my loins for the  next sip and the one after that.

What made it bearable was the music –Belleville Swing – a quartet of three guitars and double bass. They played Django Reinhardt and were absolutely brilliant. Better still they glowed with happiness, possessed by the music and the mood they created. And they made very bad beer almost bearable.
I got down to the last four inches of the glass and called it a day.

‘Anyone want another?’
‘You haven’t finished your’s yet.’
‘It’s not brilliant.’ I can do understatement.

I took the empty glasses to the bar, including my unfinished pint. I ordered a Kronenburg lager for myself – a standby when confronted with the undrinkable. Neil, the landlord, dutifully pulled me a Kronenburg then noticed my unfinished drink.  He raised an eyebrow and nodded. ‘Off was it?’

“Try this one instead. Butty Bach. Fresh barrel. On the house.”
On the house. Those magic words.