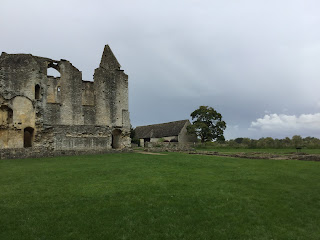 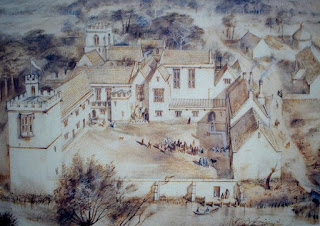 Sir Francis Lovell had everything, but he had no concept of ‘cutting his losses.’ Born in 1465 he became a ward of the Yorkist Edward IV and later an ardent supporter of Edward’s brother Richard III. In exchange Richard made him ‘Butler of all England,’ Privy Councillor, and Lord Chancellor of the King’s Household. Richard’s Lancastrian opponents penned a sour little couplet: ‘The cat, the rat and Lovell our dog rule all England under a Hog.’ The cat referred to William Catesby, the rat, Richard Ratcliffe, the hog, King Richard whose emblem was the White Boar. The dog referred to the dog on the Lovell heraldic crest.

The great Wheel of Fortune moved at some speed during this period, great nobles losing their estates and sometimes their heads as the wheel turned. In 1485 Richard III lost at the Battle of Bosworth and was hacked to death on the battlefield. Lovell however escaped and took sanctuary in an Abbey near Colchester. In 1486 he escaped and led a revolt against the new Lancastrian king Henry VII. The revolt was easily crushed and Lovell escaped again, seeking refuge in the Netherlands (the court of Margaret of Burgundy.)

You’d have thought Francis Lovell might have got the message by now, but the following year he took a leading part in another revolt. This was ‘led’ by Lambert Simnel, a young pastry cook who tried to impersonate one of the young princes in the Tower. His small army of mercenaries were thrashed in the battle of Stoke Field in 1487, and Lovell escaped yet again.

Some observers saw him swimming on horseback across the River Trent and galloping away on the other side. He was never seen or heard of again . . . until 1708 when workmen discovered a secret underground vault in the Lovell ancestral home: Minster Lovell. In the vault were two skeletons, a man sitting at a desk, pen and paper to hand, and at his feet a dog. The skeletons along with the paper crumbled in the fresh air but rumours abounded. Was it in fact Sir Francis Lovell who had taken refuge there before planning another escape – or revolt? Had he been inadvertently  locked in and there died alone with his dog? Whatever the case Minster Lovell is said to be haunted by an armoured knight on a flashing white horse galloping through the ruins on dark wintry nights. 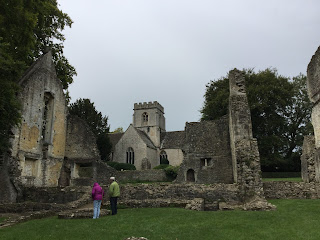 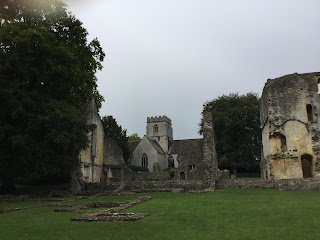 Minster Lovell had a habit of dealing out tragedy. In the C16th a newly married couple decided on a game of ‘hide and seek.’ The bride vanished and was not seen again until some years later when the family was moving. A large, very heavy trunk was being carried and on opening it the young bride was found. The longest game of ‘hide and seek’ in history. The tune and lyrics are here and here should you have the uncontrollable urge to sing along.
St Kenelm's Church can be seen in the background of the two pictures above. Here it is in all its glory 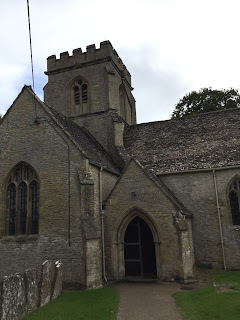 It's a C15th church named after an C8th boy-king of Mercia murdered on the orders of his sister and made a saint in recompense. His feast day is on 17th July and celebrated with 'Jerkum' (rhubarb wine) distributed free from the nearby Old Swan Inn - a practice sadly discontinued.*

Below is the tomb of Sir William Lovell who died in 1455. At least he was dead when they buried him. 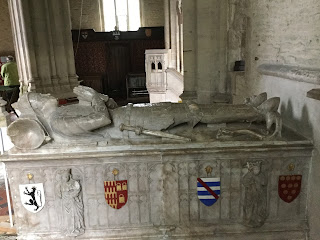 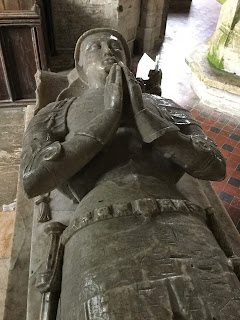 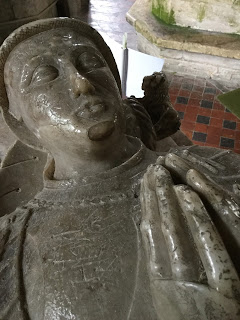 And finally some lichen just because . . . 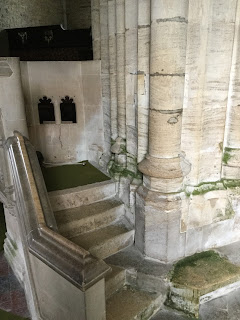 I shall celebrate St Kenelm next July with some homemade rhubarb gin.