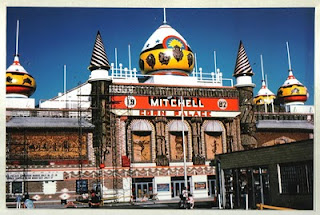 The long journey to South Dakota began. I’d deliberately chosen a circular land-route across America to physically experience the sheer immensity of the country. This was it. Every day was it. Zen and the art of staring at landscape.

We stopped off at Mitchell, went to the Corn Palace and bought slides, all of which I’ve lost. I did take one photograph which now hangs in our downstairs cloakroom. The Corn Palace shone, resplendent in a Byzantine mosaic of coloured corn. It just blazed out, a visual smack in the face beneath a hard blue sky.

I looked around and wondered whether all this had once been part of the ‘Badlands’. The fringe at least.

The earliest detailed record of the Badlands dates back to 1823 when a party of frontiersmen travelled from Fort Kiowa (near present day Chamberlain a few miles west of Mitchell) enroute to Yellowstone.

One of the men, James Clyman wrote in his diary:

‘…in the evening we camped on White Clay Creek, a small stream running thick with a white sediment and resembling cream in appearance but of a sweet pungent taste. Our guide warned us from using this water too freely as it caused excessive costiveness, which we soon found out.’

One presumes they ignored their guide’s warning then.

Costive was one of those words I hadn’t come across. At first I thought it might be akin to ‘pensive’. Pensive in the Badlands. It sounded good.

Then I discovered its meaning. Constipated in the Badlands, not so good. Mind, the alternative would have been worse. It got me thinking. How did those Frontiersmen clean their bottoms? Did Davy Crocket smell?

There was grass of course; plenty of that on the plains, in fact that’s all there was other than Bison and prairie dogs; and they’d have been worse than useless. But grass? Messy on the fingers, rubbing bottoms raw, and providing unexpected eco-systems for seeds between the cheeks.

Rye grass is pretty amazing, though not for bottoms. In only four months a single rye grass plant can send out nearly four hundred miles of roots, and those roots tangle with adjacent plants forming a thick and tenacious network. This checks erosion and also soaks up rain. The root system also allows fast recovery from prairie fires, the blackened landscape soon speckled with green as the roots send up fast growing shoots.

Just as well. The great grasslands evolved on a thin layer of soil resting on vast prehistoric deserts that covered the entire central belt of North America. The root system provided the best, perhaps only defence against climate change and wind.

Look at the Corn palace and you remember how much of the indigenous grass has been destroyed, pretty much all of it, replaced by corn and wheat, and stretching out as far as the eye can see, north to Canada and beyond. It doesn’t take much to envisage the thin topsoil with its new, less tenacious root system, flaking then rolling like a great turf carpet, as temperatures mount and strong winds blow.

It was time for a beer. I wandered down a dusty street and found a bar. Three men were drinking out of bottles and watching ‘Great American Hero’ on TV. They found it down-right funny and laughed out loud without inhibition. The culture here was different. A ‘cooler’ crowd in New York would have ignored it, talked through it, at best smiled.

I drank two beers and would have stayed for more if I could. I love bars. The drink is part of it, but it’s more than that. I love being a stranger, whether in a different town or foreign land. And every bar or pub has a different buzz. I’m seeing myself here as a slightly inebriated bee; time to return to the coach and remind my new friends to avoid the water around here, especially as we approach white river.
Posted by Mike Keyton at 08:43 No comments:

Below is the map of the journey I took. I don't know how close I came to Maria Zannini, though I think she was living in Chicago then, but anyone else I came close to enroute, please drop me a line. Regard it as a 'Time Traveller's Wife' experience, but without the romance and definitely not the sex!

Anyone who fancies a flavour of authentic America or better still have your your own blog advertised, check out Maria Zannini's contest:

But anyone content to stick with a wide-eyed idiot, just hang around here. 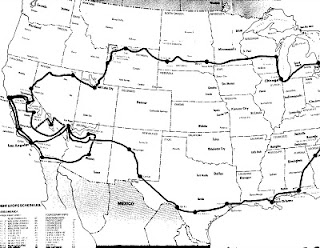 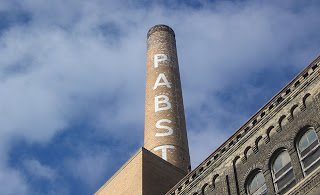 We made an early start that day, destination Milwaukee, not exactly the Wild West but the home of Pabst Brewery, founded in 1844. In the hospitality room, we were allowed up to, but not exceeding six glasses of beer, poured out by a waitress who kept count. The limit was easy to circumnavigate. I sat on the same table as a group of cooperative teetotallers, and had a thoroughly good time.

Instead of like this...or had I drunk too much? 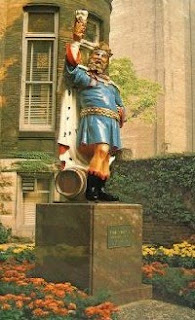 After that it was off to the Wisconsin Dells on the Wisconsin River, and a ride on the DUCKS, amphibious craft driven by a bunch of comedians. 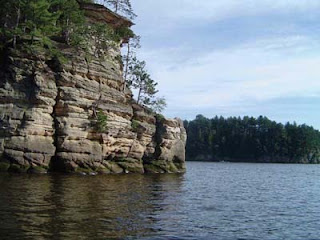 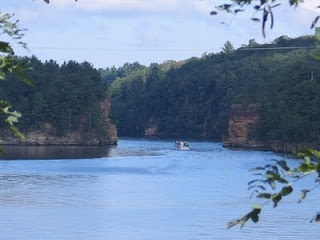 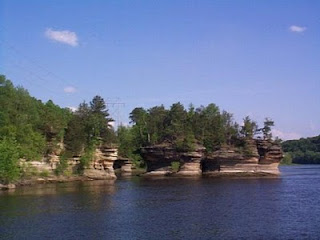 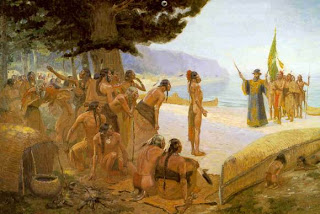 For my next trick! 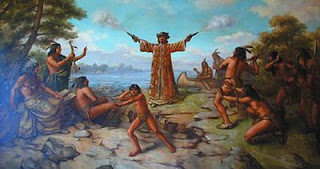 The thought, or perhaps a surfeit of beer, brought me down, but things picked up later with Roland's eight gallon vat of planters punch. There was a warm buzz that evening, and it wasn’t the mosquitoes.

Small things are important. We had tacos for dinner, then retired to the camp bar. Another Aventours group had arrived, staying in motels instead of tents. I danced with a very confused South African girl (originally from Yorkshire) who supported Apartheid but was in love with her New York coach-driver who was black. She wanted sex, but not with me because I didn’t drive a coach.

Later that night, Ron, a young and very clean cut boy from Long Island got spectacularly drunk, and I nursed him helped by a beautiful red-haired Australian girl called Caroline.

Thinking of the Potawatomi 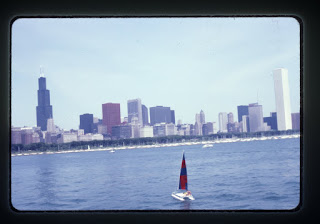 Lake Michigan is so vast it’s easy to forget that it is a lake. Plenty big enough for Indiana wastewater treatment plants to flush 6.5 billion gallons of partially treated sewage into it in July 2009, big enough, one hopes, to safely absorb it since the lake is a major source of drinking water for the district.

I wasn’t thinking of that on July 5th 1982. Roland and Birged had opted for the Art Museum that day. I wanted the beach and went with Daghmar and Evelyn. The Planetarium was on the way but the cosmos was closed until 1pm. In lieu of stars, Daghmar and Evelyn went shopping and I ended up alone on the beach.

Even the heat, 93 degrees in the shade, was good. Heat and colour fused: joggers, gleaming concrete walkways, blue skies and grass of an unrelenting green. There was no shade. I sizzled. And dreamt.

Jean Nicolet was the first European to cross Lake Michigan, presumably on a canoe. In 1634 he trumped that by being the first European to explore what is now Wisconsin. He landed at Red Banks near modern day Green Bay searching for a passage to the Orient and was convinced he’d found it. His evidence was slender, even bizarre. The local tribes were called the Winnebego, which, translated, means ‘The People of the Stinking Water’ or ‘The People of the Sea. Nicolet no doubt assumed the name referred to the smell of salt rather than the 6.5 billion gallons of semi treated sewage dumped in there today.

Through half-closed eyes I stared at the empty expanse of blue, imagining that first canoe, a speck coming closer. Through half-closed eyes Jean Nicolet could be staring back, enjoying the Chicago skyline, seen at its best from the lake. The dreaming was punctuated by duty. Every so often I was forced to check the adjacent road for Roland, who had the one map showing where our coach was parked.

No bold explorer I.

But unlike Jean Nicolet, lighting a fire in the woods, I ascended Sears Tower at 6.30 pm and drank in the City spreading as far as a distant blue haze. It was hard to imagine the deep forests that had once been there, its wild-life and rivers.
Somewhere in that sprawl was Fort Dearborn on the intersection of Wacker Drive and Michigan Avenue, the settlement from which Chicago emerged, and close to where I had been sun-bathing. 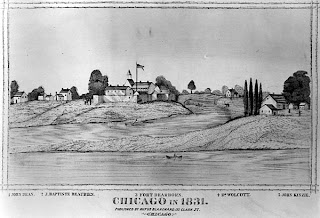 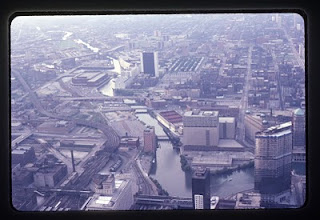 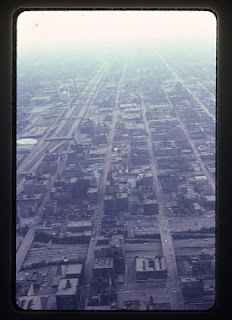 Also, somewhere down there, in 1822, Alexander Beaubien opened his eyes to the world, the first child of European ancestry born in Fort Dearborn/Chicago. What is truly eye-watering is the fact that he lived until 1907, and that, in theory his grandson could have been eating a pizza a few blocks away.

Not the Potawatomi Indians however.

When the Potawatomi Indians first greet Jean Nicolet, they little imagined that two hundred years later they’d be embroiled in European wars and ultimately forced from their land to make way for Chicago.

In 1812 they fought with the British against the newly independent America, and, led by chief Mad Sturgeon ambushed 148 evacuees from Fort Dearborn, killing 86. It has gone down as the Fort Dearborn massacre, though we don’t know how many Potawatomi were killed.

The Potawatomi had prescience. Fifteen years or so later a series of treaties enforced by the new American government dispossessed them of their land. Most of the tribe moved to Kansas where they remain to this day. Those who refused to go were removed by force in 1836. It was called ‘The Trail of Death’ - a road built on land they'd ceded to the U S government by a previous ‘treaty’.

But life moves on. That evening Roland, Veronique Pardue, Daghmar, Evelyn and myself went to a Mexican restaurant called the Margarita. Just so that we knew we were eating Mexican, a small band of Mexican guitarists along with a plaintive violin, weaved their way between tables. They sang Mexican songs while you ate, then came round with their sombreros for payment.

Paying the over-all bill was a bit of a nightmare – bit like a United Nations office outing working how best to divide the bill via travellers cheques. Something Jean Nicolet never had to contend with.
Posted by Mike Keyton at 07:00 2 comments: