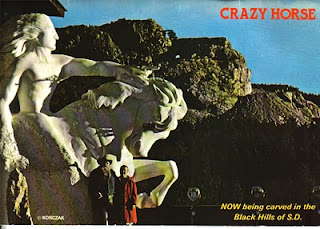 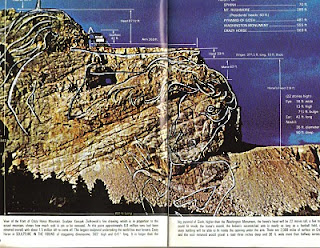 The British empire ruled over relatively few people. For the most part it governed Nig-Nogs, Chinks, Fuzzy Wuzzies; and, closer to home, Paddies and Jocks, Taffies; even the English soldiery didn’t escape such labelling, referred to as scum by many of their commanders. Today we have Chavs.

Labels disguise or sweeten unpalatable truths and they allow one race or nation to more easily fight and steal from another. It’s easier to kill a Hun than a German father or boy.

So Americans napalmed ‘gooks’, Germans gassed ‘Yids’ or ‘Kikes’ and justified their eastern expansion by referring to Poles as Dungvolken, the Slavs as subhuman. In 1982, in a speech to the Knesset, Prime Minister Menachem Begin said, “The Palestinians are beasts walking on two legs.” A year later, Raphael Eitan, then-Israeli army chief of staff told the New York Times, “When we have settled the land, all the Arabs will be able to do about it will be to scurry around like drugged cockroaches in a bottle.”

In the C19th the tribes and nations of America were designated savages. In the C20th broken and sectioned in reservations, these same savages became Chugs.

At least they had souls. That was established in 1537 in response to Spanish colonists who wanted the ultimate excuse to treat them as beasts. The Church in its wisdom ruled otherwise, the Papal Bull Sublimus Deus establishing that depriving anyone of their humanity was the work of Satan.

Theft however was permissible. Satan won that one long ago.

They made many promises
More than I can remember –
They never kept but one:
They promised to take our land,
And they took it Chief Red Cloud

We travelled eight miles from Rushmore to the Crazy Horse monument and I stared in awe, both at what had been achieved and at the grand concept behind it. Crazy Horse himself was killed in 1877 under a flag of truce. Some time before his death he was asked in scorn: Where are your lands now? His reply was: Where my people are buried. And one day both his reply and his monument will dominate a landscape.

In 1939, Ziolkowski received a letter from Chief Henry Standing Bear, which stated in part "My fellow chiefs and I would like the white man to know that the red man has great heroes, too."

Ziolkowski acted on this invitation. In 1948 and refusing government grants, he began the project largely single handed. He died in 1982, but his work goes on. I think he was an exceptional man.

Truth is though, you cannot please everyone. In a 2001 interview, the American Indian activist and actor, Russell Means, stated his objections to the memorial: "Imagine going to the holy land in Israel, whether you're a Christian or a Jew or a Muslim, and start carving up the mountain of Zion. It's an insult to our entire being." It must be nice to speak for everyone. Indeed to speak for the dead: "The whole idea of making a beautiful wild mountain into a statue of him is a pollution of the landscape. It is against the spirit of Crazy Horse” Lame Deer, a Lakota Medicine Man.

Opinion is man’s curse and greatest gift. See, how easy it is to make the grand generalisation. This however I find genuinely funny. "In Mexico one points with the chin, whereas American Indians and certain other people point with the lips.” So, to be genuine to the spirit of Crazy Horse, the pointing finger should be replaced by a pout. 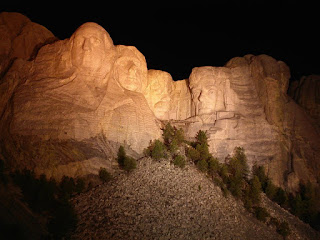 On Friday July 9th we made a late start to Mount Rushmore, but I couldn’t get Wall out from my mind. There were times I thought I was hallucinating: The Cowboy Orchestra and the Chuck wagon Quartet, life sized animated dummies hollered and winked as I dreamed along with a jumble of other artefacts Wall had to offer.

In fact I wondered whether it was worth the journey to Mount Rushmore. I mean, Wall already had a large facsimile of it, along with a bucking horse, a mounted buffalo, a covered wagon and a giant Jackalope; it had life sized carvings of Butch Cassidy and the Sundance Kid made from a 187 year old Cedar tree, and who, mercifully, remained mute. It also had a Wild West Historical Wax work museum, which was an advance on the Worlds Largest Crucifixion In Wax offered to honeymooners at Niagara.

Staring out the window put things into perspective. I was looking at the remains of a vast inland sea extending from the Arctic to the Gulf of Mexico, the Great Plains its sea-bed, the Badlands its finest creation. Sandstone eroded over millennia into castles, turrets, finely sculpted walls, profiles of great historical figures.

Only men with an agenda and less patience noted the absence of four Presidents and set about to put this right.

Gutzon Borglum, an active member of the Ku Klux Klan chose four presidents involved in the acquisition of Indian lands (though admittedly every President during this period could be accused of the same) The mountain he chose was known to the Sioux as ‘Six Grandfathers’ but was renamed in 1885 after a prominent New York Lawyer Charles E Rushmore - because as one of those with him said: ‘Hell, that mountain has no name; it may as well be named after you.’

That evening we went to see Mount Rushmore illuminated and were regaled by a brilliant actor taking on the part of Teddy Roosevelt. We sat enthralled listening to his western drawl beneath honey coloured rock blurred in drizzle. He was explaining why he was up there, but interest gradually waned as drizzle turned into heavy rain. We returned to our coach with a collection of soggy leaflets and a jumble of facts: 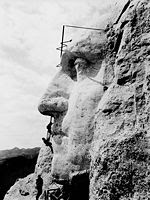 Each President's head is as tall as a six-story building.

Over 800 million pounds of stone was removed from Mount Rushmore during the construction.

Workers had to climb 506 steps every day before they could start work.

The president's noses are 20 feet long, their mouths 18 feet wide, and their eyes are 11 feet across.

At least they weren’t waxworks.
Posted by Mike Keyton at 05:02 2 comments: 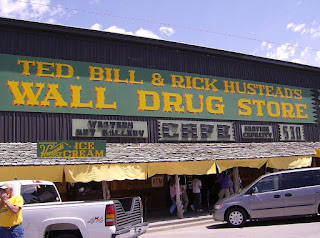 Our eventual destination was Custer National Park in South Dakota. Stomach full of home made salad sandwiches – such are the travails of the modern explorer – I sat back as though on a stage-coach and let the scenery slip by. I thought back on the incredible heat of the Badlands, the tiny red flowers that somehow pushed up from grey baked clay, the razor edged labyrinth of wind sculpted rock where I almost got lost. That wasn’t my only scare, though I hesitate to admit it now; I mean, who else on God’s earth would mistake crickets for the sound of a rattler and jump ten feet high?

In the words of Milton Berle: ‘If opportunity doesn’t knock build yourself a door.’*

In December 1931, Dorothy and Ted Hustead did just that. They bought the only drugstore in Wall, essentially the capital of nowhere, and showed that even in the throes of Depression, money can be made from nothing. They offered free iced water to early travellers passing through the Badlands. Later in a burst of philanthropic madness they threw in coffee at 5 cents.

Thing is people stopped and bought all manner of junk also on offer – because there isn’t much else to do in Wall. Then they realised a marketing gem: the ‘cult of signs’ and so Wall became famous. I hadn’t realised how famous, I mean there're no signs in Newport, but there is one in Antarctica for penguins with money. 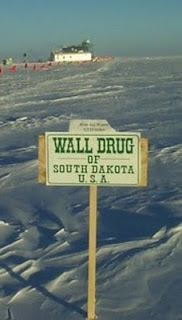 In South Dakota, there are signs all over the place, not so much subliminal advertising as pounding you into submission. Free ice-water yeah, got to have it – five cents coffee – you know it makes sense. Just as much sense as the giant dinosaur that tells you you’re almost there. 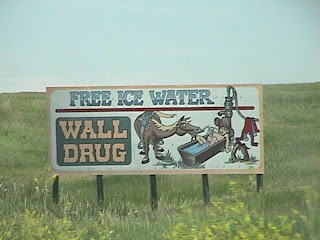 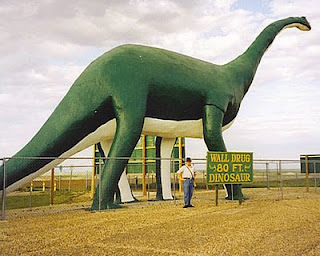 Eventually we reached our destination - Custer National Park - where we saw prairie dogs being fed by squealing girls, bears chasing food thrown from the back of a land rover, and bear cubs, pushing for space in food troughs provided. The wilderness themed.

Maria from Madrid made paella for us later and in return I washed dishes, some clothes and watched three half-hearted Indians dance. They were middle-aged, and one of them wore glasses. The hat went round but little was collected. A little boy’s dream struggled to make sense of it. Red Cloud wouldn’t have danced for tourists.

But worse was to come. Pam’s ‘Sing-along’. We huddled around the camp-fire and sang ‘Row, row, row the boat…’ Not enough gin in the world to make that one work; but then you can’t have everything.


And this one's for Greg. Happy Birthday. She still asks after you. 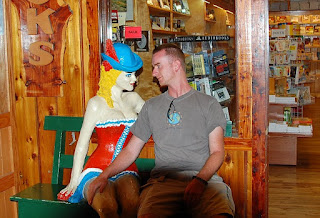 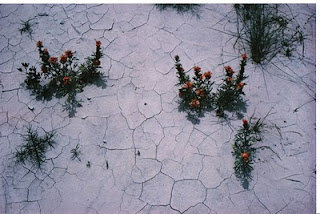 We were travelling through the badlands. I was travelling through my mind: visions of bleak red landscapes inhabited by bronzed Ogala, some in buckskin and beads, their chiefs resplendent in long feathered head-dresses. In a squint, tiny men in blue galloped on horse-back, sabres drawn and bugles sounding, lost in ochre canyons and dwarfed by giant bluffs: The mental bric-a-brac of a very small child. (scroll down to blood red skies)

The reality was just, well….empty; hills and canyons a glare of gold beneath an unrelenting sun. We took photographs, walked some way in a narrow gulley, realised how easy one could become quickly and hideously lost in the complex twists and turns or ancient rock, how quiet it was, how dry. 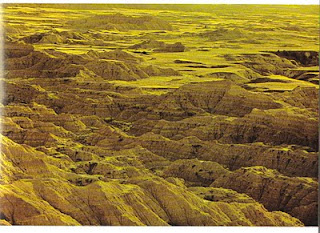 We travelled a bit farther on and I walked on prairie, pushing through grass. It was pale green and wiry, and stretched forever. I was here – in the west – the dream of a very small boy come true and yet, somehow it wasn’t enough. It wasn’t 1850. . . or 1700. I was trapped in a twentieth century time-line and there was nothing I could do about it, except day-dream and write.
Posted by Mike Keyton at 03:39 6 comments: