So here's to the summer that went!


My New Year’s resolution was to visit old friends. So far I have managed only one, Richard, living now in Hassleholm. Within weeks of my return I began experiencing breathing difficulties, with the outcome already described. But now I have a backlog of friends presently spared the Keyton visitation, and only three months left before the start of a new year. As John Lennon said ‘Life is what happens to you when you’re busy making other plans.’

I enjoy travelling, I love holidays but sometimes I wonder. Why go through the hassle of airport security, recycled air and dodgy cabin air pressure, delayed trains and traffic jams when you can just step out your back door with a bottle of plum wine or a glass of cold beer and listen to birdsong? 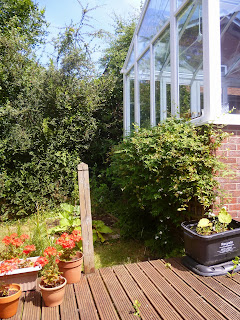 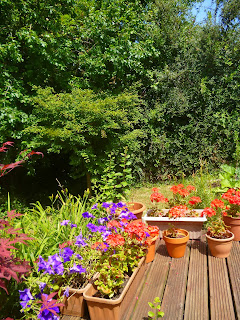 Damson trees above and below. 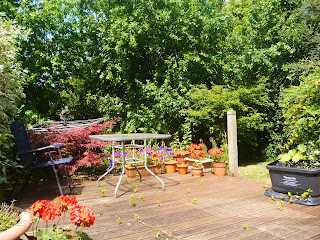 Trees and sky beyond. It's easy to forget there are neighbours 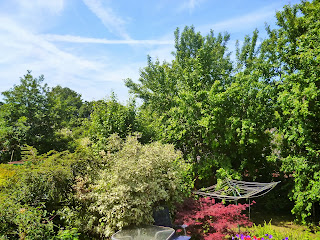 And home when the beer is finished, the birds have stopped singing. 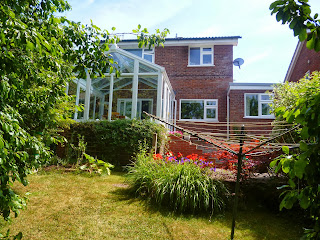 It’s been a good summer. The plum harvest was magnificent – largely shared with neighbours and friends while I was otherwise engaged. And my daughter was magnificent, picking, stoning and freezing 12lb of damsons for the damson wine I’ll make when I can.

So here’s to the Summer that went. And here's to good friends.
Posted by Mike Keyton at 04:47 6 comments:

What you can learn in a short space of time 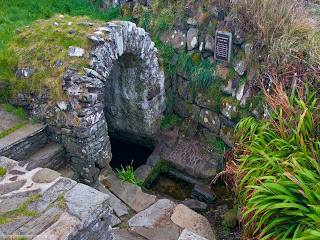 Bottom pic donated by my daughter 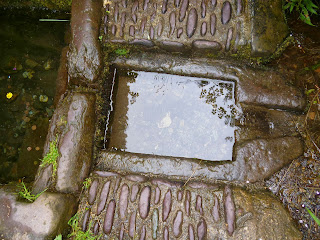 The Well of St Non (the saintly mother of St David) is easily accessible. Its water is quite pleasant to drink, but it offers no cure for a collapsed lung.

Nurses are a saintly breed but they can talk about the most inappropriate topics. The one who trolleyed me out to the operating theatre talked about food. As he conveyed me through corridors and elevators, he told me how his son was a gifted Chef. He told me some of his favourite recipes, and how to cook the perfect curry and an even more perfect Onion Bhaji.
This was to someone who had just fasted twenty four hours. The anaestheticist  told me afterwards, he’d had some trouble inserting an oxygen tube from oesophagus to lung. I’m not surprised. It would have been struggling against a ravenous tide of expectant saliva.

Illness is a great leveler and nursing is a vocation. There have been horror stories in the press about malfunctioning hospitals, and I’m sure all of them are true. But when you see a good hospital in action it is an eye-opener. The patience and just pure human kindness is something you never forget. Over a short period of time I shared a ward with, amongst others,  a drug addict, a simple-minded man with a beautiful soul, and another severely incontinent who had to be cleaned every few hours – all of them treated with humour and grace.

The first night after the operation I had a nurse who checked me on the hour. Just as well. Wires have a life of their own - especially those attached to the body. Anaesthetics also have unexpected effects. When I stood to urinate two things happened and one thing didn’t. Wires entangled me like mischievous snakes, becoming more creatively entwined the more I struggled. And the machine went berserk, beeping and flashing in various shades of red. This was because my heart hadn’t been warned and it rose from 92 to 160 and I staggered. Everything was working then, except my bladder, which slept through it all and refused to cooperate. The nurse systematically untangled me and my heart rate returned to normal the moment I lay down.

She was an excellent nurse, with a small tattoo on her neck. The machine had no tattoo but was malevolent. It had but one purpose, to punish not just me but the entire ward if I didn’t breathe deeply enough. I spent the night taking deep breaths, eyes fixed on a numerical display that couldn’t be allowed to fall to 8 or below.
It was like being attached to a video game 16 – 14 – 10 – 8 BEEP! BEEP! BEEP! I appreciated the sense of it. Lungs have to work hard after a pleurectomy. But some sleep would have been nice.

And the most perverse thing of all?
I learnt that when you’re told you can’t do something that you have never wanted to do – you suddenly wish that you could. I now wallow in melancholy because I will never be able to scuba dive or experience the joy of hard physical sport. This is weird and irrational. I blame it on the Tramadol.

And one thing to share: Pembrokeshire is a well kept secret - and I've just blown it.

St Nons is on the coastal path that will take you from one end of Wales to another. 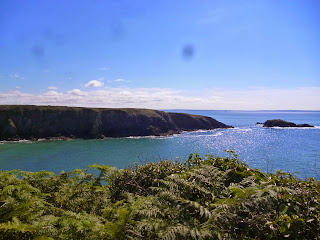 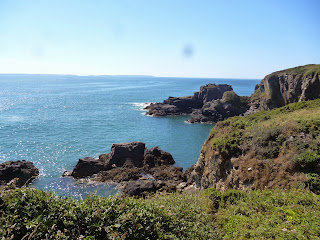 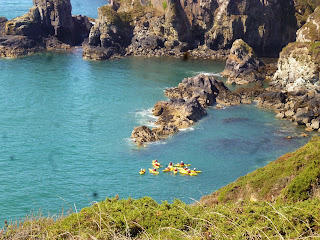 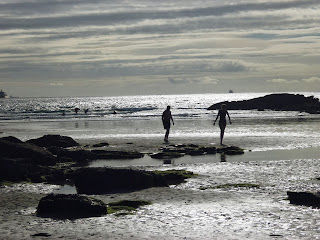 
A distrust of magpies was instilled into me as a child: ‘One for sorrow, two for joy, three for a girl, four for a boy.’ The rhyme has a merry bounce and sounds innocuous, even innocent. Why then the frisson of fear on seeing a single magpie? Why the involuntary spitting on the pavement and greeting said bird with ‘Good day Mr. Magpie’? And perhaps most puzzling of all, how was a thoroughly urbanized Liverpool toddler infected with such rural twaddle?

Within five minutes of setting out for our holiday in Pembroke a single magpie zoomed across our windscreen and vanished. I avoided spitting. It can’t be done in a car without eliciting comment. I did, surreptitiously, wish it a good day. Then, blow me, ten minutes later another single magpie shot across my line of vision. A chill ran through me, my thumbs prickled. I knew something bad was about to happen – but what – and when?

We had barely arrived in Nolton Haven when I almost stopped breathing. Some kind of invisible elastic band encircled my chest stopping allowing only a trickle of air into my lungs. Walking from bedroom to kitchen brought me out in a sweat and a pant. It also brought into relief how precious air is.

I’d experienced a similar revelation crawling out the Grand Canyon and, a few years after that, mazing my way through the ruins of Pompeii during a heat-wave. Water then was the ultimate treasure.

Water and air - finer than the finest champagne, finer than the finest malt – even Lagavulin. Such revelations invariably occur when it’s almost too late. Still, I was on holiday to enjoy myself and that involves swimming in a cold Atlantic. Take it easy, I thought. Go slowly. Just float. Big mistake. My lungs went on strike and twenty minutes in I juddered to a halt. Magpies danced and cavorted as I crawled on to land.
The doctor was sympathetic. She told me I had beautiful blood pressure but an infection in the right lung. Strike One to the Magpie. Just one more to go.

I didn’t have to wait long. The following night in fact.

It was a strange cottage with low beams that caught the unwary head. But the magpie had more serious intent than a cracked head. It was night and I was on my way to the toilet, concerned not to wake my wife, so didn’t switch on a light. I felt my way through darkness half asleep, dreaming or perhaps imagining myself to be Dirk Deadly on a mission…Gestapo close on my heels. Unfortunately for me the stair-case was adjacent to the toilet and I stepped on air, tumbling head first down the stairs.
I mouthed a silent prayer to God that there hadn’t been a third magpie. Two had done their worst. Enough was enough.

Post script.
An X Ray showed a collapsed lung. Pneumothorax to be exact. And from X Ray to draining it was sorted out in a matter of hours. The NHS is both efficient and fast – when things go right. Just waiting for a final check up – fingers crossed and scanning the skies for magpies.

PPS
Damn magpies. There must have been one great windblown, flea-ridden specimen squatting on the car roof on the way home. Far from being alright I was called in again and attached to a wall by a tube sucking out excess fluid and air from my thorax. Two weeks later they said it wasn’t working.  Three days after that I had a pleurectomy – something I’d like to do to every damn magpie in creation. Shooting’s too good for them

PPPS
And thank you again here
Posted by Mike Keyton at 08:35 8 comments: