Spaced out on Cheese

This story is about:

But begins with this 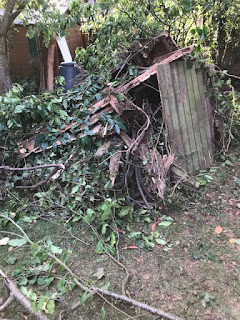 It had to come, the conclusion to the damson carnage: the bonfire. But not content with a damson bonfire, we also set about an ivy encrusted shed storing things we’d long since forgotten—mercifully so. The roof had long since collapsed letting in ten or more years or rain and snow and whatever else had chosen to enter. 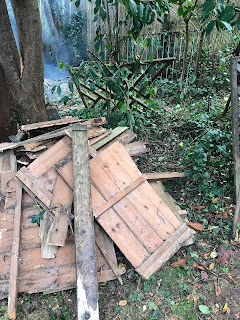 Pieces of shed in an elegant sprawl

After lamenting various ruined possessions that we’d forgotten we had, we took them to the tip and began demolishing the shed with the help of two very good friends. It was hugely cathartic, sledgehammers and jemmies, my wife, suitably masked, wielding the chainsaw. 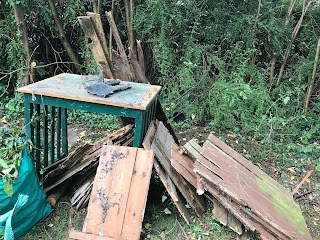 And then it was done. The bonfire looked big, too big for one gigantic blaze, so we spent the afternoon feeding a much smaller, more controlled fire on the concrete slab where the shed had stood. Yes, we let the immediate neighbours know first, and they were, mercifully, as sweet as pie about it—though there was one complaint from an unknown house some distance away. Luckily, she accosted my wife who looked suitably menacing with her chainsaw and helmet, and she wandered away having vented but not very happy. As they say in latin, Lentus, or is it Resisto? 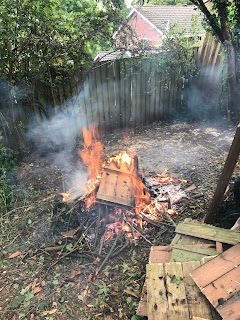 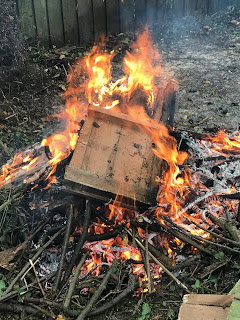 Somewhere in there were ten baking potatoes - Tescos' finest - wrapped in foil. We never found them 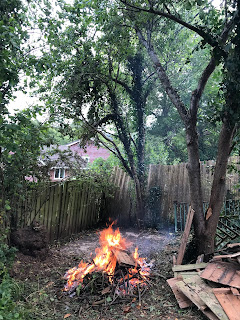 But what an eye-opener when it is done! Bearing in mind the majestic, living things we’d cut down, the size of the bonfire . . . and this, this small, pathetic pile of ash! 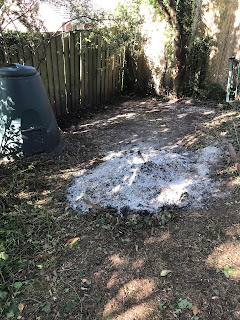 Remind me, I never want to be cremated. 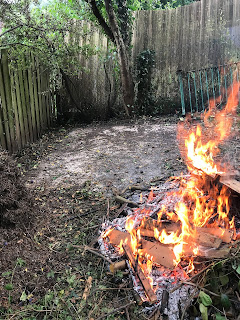 On a happier note, we plan some rambling roses on the fence, various potted perennials on what will be a clean and white slab, and a wrought iron bench that we’ll probably never use.
Posted by Mike Keyton at 14:10 4 comments: