On that day we toured L.A – a dirty and tedious city. It was accompanied by a verbose and lack-lustre commentary. A proud and civic minded los Angelino might take exception, much as I would by anyone who had the temerity to malign Liverpool, but then we each interpret what we see, and what I saw was Universal Studios and downtown LA. 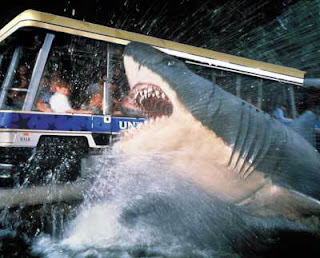 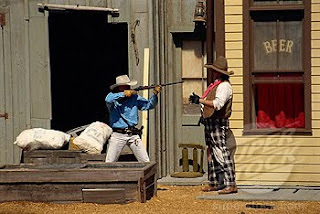 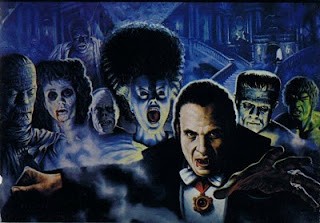 At Universal studios I had a shark jump out at me, saw stuntmen re-enacting Wild West gun-fights, observed Dracula haunting his castle and then it was over.

Angel Pavement left me similarly under-whelmed. I checked out Roy Rogers, and saw the star of ‘Lefty Frizzell' – who I’d never heard of. I think it should be somewhere in the contract that only people known to Mike Keyton should have their star and hand-prints imprinted in concrete. To be honest, it seemed a sad little honour. Is that all life has to offer, a hand-print in concrete in a sleazy street?
Guess so. 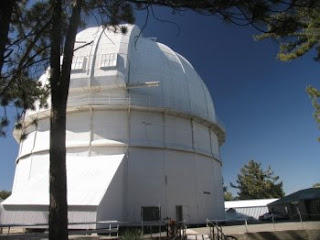 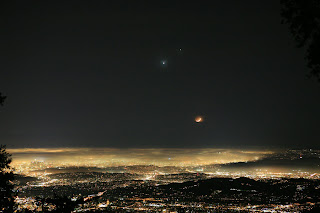 Credit & Copyright: Dave Jurasevich who kindly gave permission to show another side of Los Angeles. Earth or sky, the choice is yours

In the evening we went up to Mount Wilson Observatory and looked down on the lights of L.A. The soulless streets had been transformed - a master-class in illusion trumping reality. Then we politely queued to look at the moon through a telescope.

Even now I remember the tedium of that day. It was the first time ever, in America, I’d been bored.
Posted by Mike Keyton at 03:33 4 comments: 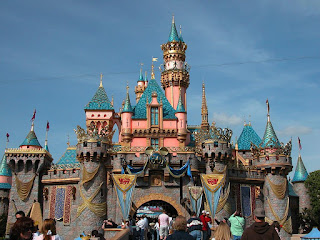 Despite the Popov vodka, Saturday meant an early start. We had to get out money’s worth from Disney. I began the day jogging, and nearly tripped over Kim’s head. It was sticking out from her tent. ‘I wanted an early call,’ she explained.
Disney land called for discipline and determination, more so because of the omnipresent subliminal message to just slow down and enjoy yourself. Enjoy yourself? Were they mad? We had:

- To get through. Never mind the automaton of Abraham Lincoln that was spookily real. I’d have voted for him. Maybe the Republicans should drag him out for the next election – despite what he said, you might not fool ‘all the people’ but you can probably fool enough people to win an election today. An automaton of Abe Lincoln making home movies in Alaska and staring at Russia should do the trick. 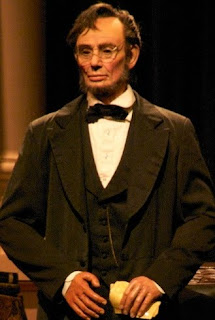 Against this urge to sample everything – some things twice – was the psychic trip-wire of the dreaded Disney muzak. There were hidden speakers everywhere pumping out acoustic syrup and the frightening thing was – it worked. The Nazis wouldn’t have invaded Poland if Disney had been in charge of the music. They’d still be ambling in Bavaria with happy smiles under impossibly blue skies.

I found myself ambling, unaccountably content. It was weird, unsettling – there were still rides to get through.

Eventually it was time for lunch – a late lunch – somewhere around 5 pm; and I joined Gary, Caroline, Kim, Sharon, Roland and Pam in a hired car. We went to a Pizza parlour, ate and bought a box of beer. We were back in time to see the fire-works – but then something frightening happened in the car-park.

Fear with a smile, so to speak.

The Disney ‘police’ emerged from nowhere. I mean from nowhere – even before we had time to take our ‘illegal’ beer from the car. How did they know? Had that bloody automaton followed us or could these guys just smell beer? Are they working on the Mexican frontier even now?

All these questions however were academic against the over-whelming smile. It’s hard to disobey a smile. Put it back in the car they said. And we did.

Just as well probably. We enjoyed the very last ride on Space Mountain which went three times faster than normal. It was a case of clinging on for dear life. A few beers down and we’d have been doing more than gasping. It would have quite ruined the Disney Parade, or at least added more colour. 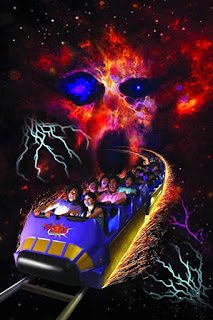 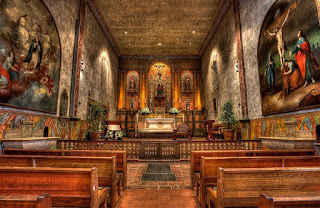 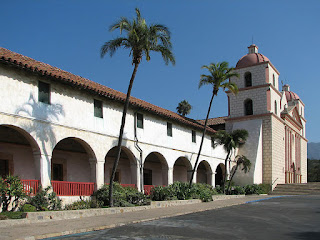 We set off for Santa Barbara and saw the old Spanish Mission and some beautiful suburban houses. I walked with Laura, an attractive, strong-minded Canadian, but with some irritating mannerisms. I know they were irritating. It says so in the scraps of paper that made up my diary, but it doesn’t say in what way and I can’t remember how. Samuel Pepys, I wasn't.

We wandered about, her with those irritating mannerisms, me with my scraps of paper, and looked at some Mandolins – none of which I could afford. So instead I bought a pulp novel called ‘Aztec’ in readiness for New Mexico.

Later we settled on a beach in Santa Monica, and drank more free wine from a nearby winery. Afterwards I practised the mouth organ beneath a palm tree and, in need of some activity, played with Gary’s kite in a cloudless blue sky. (Though not at the same time) 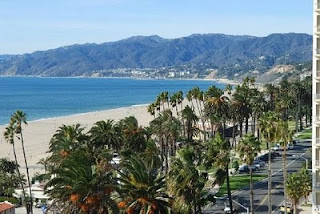 As you can see it was an action packed, purposeful kind of day. But things were about to hot up! 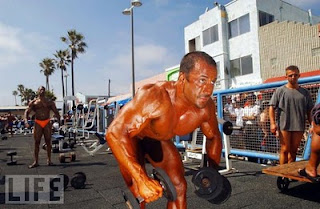 In the late afternoon we drove to Little Venice, a famous Californian beach that reeked of body oil and pagan hedonism. We spent some time outside a compound. Inside the compound body-builders posed and worked out, watched by groupies of both sexes and some I couldn’t make out, who watched and drooled, and spoke in intense whispers. Here the body is worshipped – and I was out of place.

The pagan theme was reinforced by a spectacular Grecian sunset, and I understood what a ‘wine-dark’ sea meant at last.

The day ended with a barbecue and Dana got drunk as a skunk. We drank what was left of the home made grog, the surplus rum, and back in the Disney campsite I was persuaded to drink the remains of Kim’s Popov Vodka.

The Disney campsite verged on the unreal – and I’m only talking about the grass. It was so green and dense and lush. It was designer grass, each blade graded within an inch of its life and trimmed by Vidal Sassoon. Elton John would have paid a fortune for a transplant like it, and he could probably carry off – Green.

The site was about one and half miles from Disney-land. It was packed, like the grass, and like the grass, very well-ordered. Two Australians, Brett, and Mark Binks, joined us later that night, their plane having been delayed. Unable to sleep, I drifted on the moon-lit grass and stared at stars that shone with Disney magic. I wondered if the Franchise had designed them too, like the grass.

It was probably the Popov Vodka.
Posted by Mike Keyton at 03:30 2 comments: 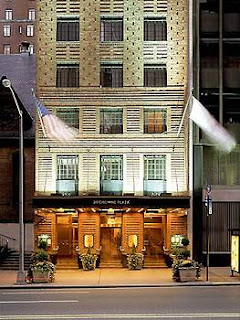 
Getting up wasn’t easy. We left San Francisco at 8am. There were more farewells, more group hugs in the street outside the Tudor Hotel, and then we were off.

On the bus I considered the ‘group hug’. From a culture where a handshake is measured and infrequently given I found the concept alien. But something was happening to me. I was slowly morphing into a ‘hugger’ and I wasn’t sure that I liked it, nor whether I’d continue to give great roaring hugs back in England. Bonding-bubbles are weird things, I decided. And now there was more bonding to come as those we had left were replaced by others who were taking the trip from San Francisco.

The new ‘Tour leader’ was blonde, repetitious and unconsciously patronising. The replacement cook ‘Sandy’ seemed earnest and a little unsure of herself. In retrospect this was just arrogance on my part and, as a teacher, I should have known better. Our new tour leader was trying to ‘establish’ herself in an ‘established group’ but it was a bit tiresome having to play ‘word-games’ with the relatively few ‘new-comers’ when we could have just talked. When the word-games ended, we passed around the beer. 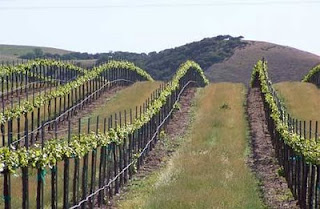 Around Mid-day we stopped at a winery in Monterey where a guy told me, with evident enjoyment, that the wine they sold to English supermarkets -‘Paul Masson’- was basically ‘plonk’ and that their best wines went elsewhere. He did himself a disservice. I’ve never bought Californian wine since.

Then however, I drank a lot. It was free. We ate lunch on the cliffs of Monterey, and later I paddled and pissed in the sea. Not my finest hour, nor so fine a moment as when Balboa marched into that same Pacific ocean and claimed it for Spain. But then he hadn’t drank the wines of Monterey.

Really, I was taking revenge for Juan Rodríguez Cabrillo. 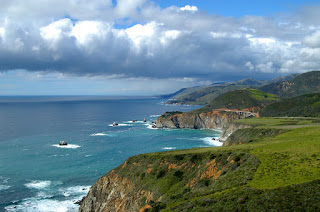 Staring across the bay I’d just affronted I thought of this man, born in the late medieval period of very poor parents. As a conquistador he rose to fame and fortune on the fringes of a strange new world, and still this wasn’t good enough. Like everyone of his generation he was after a short-cut to the east and thought he’d find it by exploring America’s Pacific coast to where he thought it joined Asia, not so very far away.

Struggling against storms and bad weather he sheltered in Monterey bay before sailing to Santa Catalina Island to winter. Faced with attack on shore, Cabrillo organized a relief party and rowed to rescue his men. In the records: “As he began to jump out the boat, one foot struck a rocky ledge, and he splintered a shinbone.”

I cringe as I read this. Cringe even more when I calculate how long it took him to die. He splintered it in November 1542 but under the ministrations of his surgeon it became gangrenous, and he died on January 3rd 1543.

He left no settlements, had found no passage linking the Atlantic and Pacific, had discovered no new route to China. He never even got a sniff of the fabled seven cities of Cibola and failed to sight San Francisco Bay which remained undiscovered until 1769.

Interesting how life turns out. I toasted his memory. 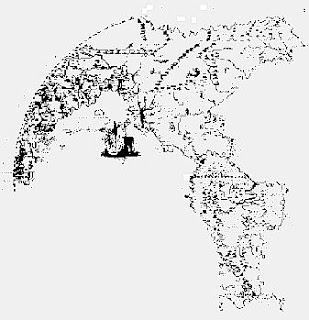 Maps like these that showed Asia and America joined, and not too far away, lured many explorers who always thought that just beyond the next wave they might find it.
Posted by Mike Keyton at 08:10 2 comments: