When Harewood House was first built they had a state-room for visiting royalty and the most expensive Chippendale bed ever commissioned. The bed with its green silk has been used twice, once in 1816 for the Grand Duke Nicholas of Russia, a second time in 1835 for the Princess Victoria on a tour of the country she would very soon rule.

I was just about to take a picture of the bed – a golden moment when no one else was in view — when a burst of infectious laughter brought me back to reality, a young black couple behind me waiting to take a picture when I’d done.  The woman studied every aspect of the bed and then posed in front of. “I want a bed like that,” she said.

“I’ll get you one then,” her partner said and both laughed even louder at the absurdity of it all. It lifted the spirits along with the fact that so much beauty and wealth was now being shared – visually at least. No testing the mattress here. 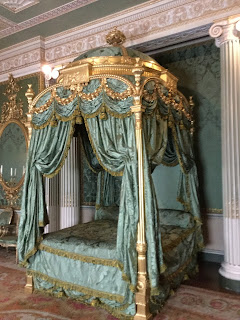 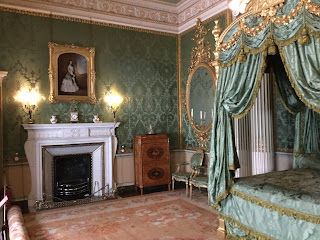 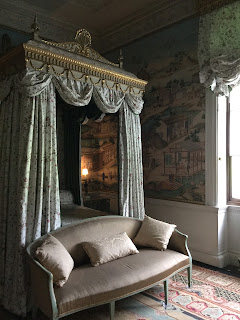 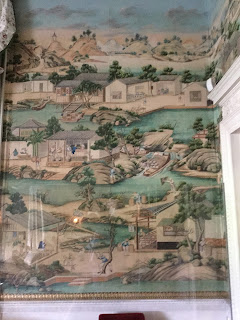 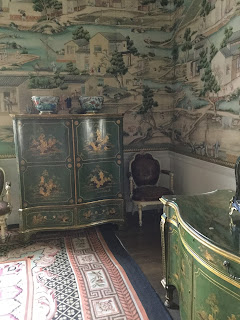 . . . as well as the spacious toilet with a ceiling to stare at 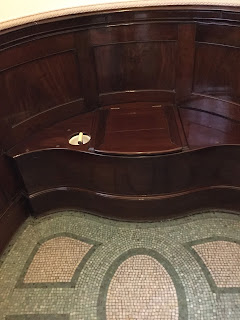 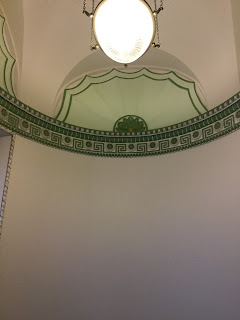 But the room I found most interesting was the one dedicated to the Countess Louise. 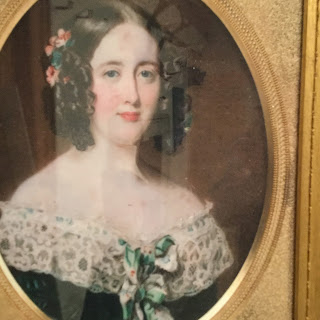 Between 1828 and 1848 the Countess Louise had thirteen children with Henry Lascalles, the last one born when she was a grandmother at the age of forty seven.
In between popping out children, the Earl and Countess administered a 50,000-acre estate and several villages. They modernised village houses, supported the local school, established a savings bank and a Literary and Scientific Institute, which included a library and regular lectures. They founded a village cricket club and provided the field still used today, supported a local doctor and gave regularly to the poor.
Nor was the house forgotten, renovated at the cost of £37,000  or £21 million in todays money. And here is where the story becomes a tad bitter and illustrates the futility of sanitising or covering up history like knocking down statues or disguising the provocative legs of a piano with fabric.
Where did the money come from? 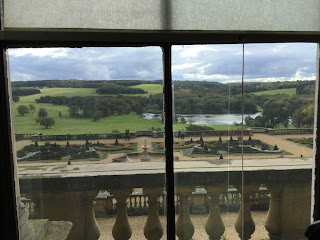 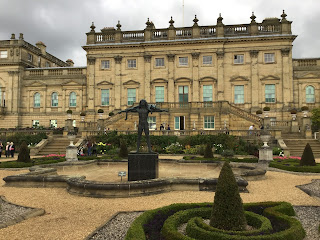 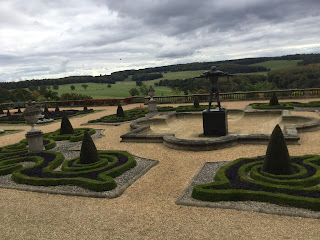 'There is a tide in the affairs of men' sounds better as a title than ‘displacement activity.’ I can’t say language has improved over the years. This morning I woke up ready to slip into my usual routine until the realisation that my ‘usual routine’ had gone. I had just finished a book (yet to be edited) It was something I’d been looking forward to – finishing the damn thing – and I had all these other projects seething in the background, shouting out ‘Me next! Me!” These include several short stories and a more serious work on Anthony Trollope. The latter I thought I’d finished until it dawned on me I had yet to read two of his Irish novels, novels that might modify my general thesis. I'm currently finishing Castle Richmond with the Land-Leaguers yet to come.

So, lots of stuff, but when I woke up I realised I wanted none of it. Not burnout exactly, more a need for breathing time and space – and activity. Above all activity.

This morning I transplanted an ailing Rhododendron bush from its pot into the garden. It had once stood guard over the front door but was appearing steadily sicker as the weeks passed. Each time I slipped the key into the lock I sensed or imagined a stern, reproachful stare. So this morning I wrenched it from it’s  very large pot—no easy thing—dug an even larger hole in the garden and bunged the damn thing  in. 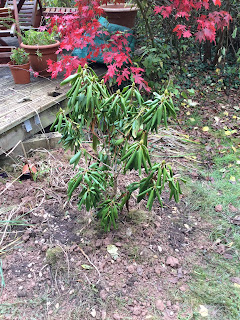 It still doesn’t look very happy, as you can see but much the same thing happened to its ‘parent’ three years ago, and its transplantation brought it back from the dead. I’m expecting great things. 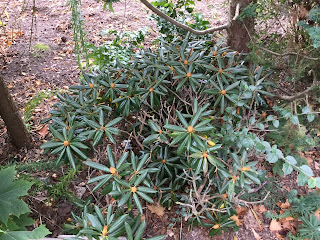 Next I noticed ivy taking over what we laughingly call a lawn. ‘Bastard,' I muttered and went to it, digging out leaves and stems and leaving a substantial stretch of bald earth. Bulbs have been planted and the baldness re-seeded. 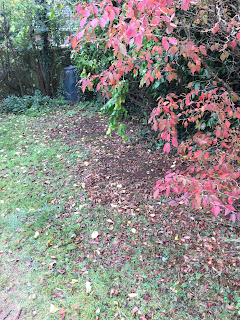 And now, marginally refreshed, I’m blogging about the whole miserable business because, at the moment, it’s the only thing I think I'm capable of. After this I'm off to tidy my desktop and organise an army of photographs, perhaps even cull my inbox of emails read and forgotten.

As George Harrison said in one of his finest albums, ‘All things must pass.’
Post script:
Just to show my life has a little more excitement than digging holes I've included some more photos from our last visit to the Cotswolds, a small village known as Upper and Lower Slaughter.