Celeriac it is then

Life is short, and every week I like to try something new—especially when it comes to food and drink; thus I discovered the joy of Roquefort, Pataks Aubergine pickle in cheese sandwiches, the competing merits of Marks and Spencers pork sage and onion stuffing Vs the lighter sage and onion stuffing from Waitrose. One day I will sample celeriac.

Not too sure whether I will sample the latest offering from the Monmouthshire Beacon.

Amidst its pages advertising Welsh Government Grants for Hedges, Shakespeare's magical comedy in Penault, a decade of tea dancing at Bridges and the celebratory bell ringers of St Teilo’s, I came across this:

‘Sell-out swingers festival to arrive later this month.’ It’s euphemistically billed as ‘the biggest lifestyle event of the year,’ which I’d find more convincing if it didn’t involve caravans and tents on a mystery Monmouthshire farm. Interestingly on an adjacent page I read, ‘Help your Dad improve his mood this father’s day’ (or at least confuse him.)

But back to the Swingers, all of whom will be wearing wristbands showing their sexual preferences and exhorted to ‘Be clean, smell nice, look good, feel good,’ (which clearly discriminates against Keyton)

As one of its organiser’s said, it’s for ‘…people that are sexually open minded in general.’ To me it sounds like Bear Gryls on steroids and presumably excludes one of our local councillors who approved the decision"
“What people do in their private lives between consenting adults is no one else’s business really, but I won’t be buying a ticket!” Nor, I suppose, will I. Celeriac it is then.

Bond at the Auction Rooms

A few weeks ago I attended a parish auction with only one aim. It worked two years ago, when I bought a wonderfully old blanket chest at a knockdown price. This year I was after a blue, leather-bound set of Walter Scott, not first editions, but published in 1900. In these events it’s as well not to make your interest to overt, so I hovered over all the books and was even tempted by a first edition of Biggles, meaningful to every Briton of a certain age. Then, when no one was looking, I inspected my quarry. What was so startling was not only their general condition, pristine, but the quality of the paper, still a startling white, with gilt edging.

I sat down in quiet anticipation with my bidding number 44.

I’d been given strict instructions not to come home with stuff we didn’t need. How a set of twenty-two leather bound book escaped this injunction, I don’t know. Only that my wife is very tolerant. But dear me, I was tempted.

Monmouth is quite wealthy and parishioners generous. There were treasures here, I tell you, gorgeous cut glass, decanters, whole tea sets, fine porcelain, all at ridiculous prices. The acquisitive gene was writhing, bursting for release. I held firm.

Then, at last the books came under the hammer, and I grew a little alarmed when the first edition Biggles was sold for £26. How the hell was I going to afford twenty two volumes of Walter Scott?

My beloved was brought into view, the price starting at a modest £10 for the lot. By this time, I knew the score. I held fire and observed. Who were my competitors? Were there any?

Yes. Two. They began in a fairly bored way, bidding against each other in desultory fashion, each time raising their bids by £2. At £20 one of them dropped out and the auctioneer’s hammer went down once, then twice—>I held up my card! And sensed the gnashing of teeth somewhere behind me. (At this point, I confess to an elementary mistake. I was sitting near the front and couldn’t easily see my competitor who stood near the back)

Time to play mind games. The price kept going up —> £22. £24. £26. Each time I hesitated, sweetening my rival with hope. The auction room had vanished. I was in Monte Carlo, wearing a white jacket, with a martini, shaken not stirred. Bloefield sat on the other side of the card table, face steady, his cards unseen. Who would blink first?

I had my limit—made up there and then—£40. I had my guardian angel, too. My opponent folded at £38 and I left the room triumphant, with twenty-two volumes I’d probably never entirely read. Stroke perhaps. 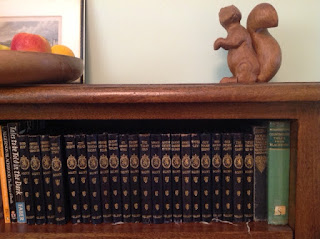 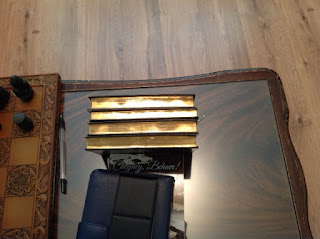 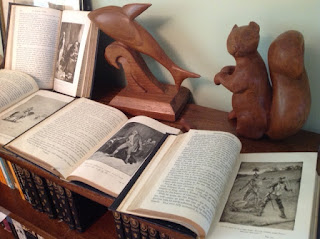 Mary had a trippy lamb

The Welsh sheep is an adventurous creature, learning how to escape fields by rolling over cattlegrids, indulging in experimental sex, if the canard about Welsh country folk is to be believed, and now they’ve learned to take drugs.

The remains of a cannabis factory were dumped outside the village of Rhydypandy. The authorities discovered it too late. The sheep had got their first—much to the alarm of local residents who talked of ‘psychotic sheep,’ and of sheep roaming the village, breaking into bungalows—in search of munchies?— and defecating on carpets.

Personally I think this could well develop into a bijou business. The North Ronaldsay sheep is famous amongst gourmets, their diet of seaweed giving their meat a distinctive tastes. Roll over hash-cakes, the hash-burger could be on its way.

There is, though, a negative side.

Cannabis is often seen as the gateway drug leading on to crack and cocaine, panhandling and crime and I’m not all together convinced by the absurdity of this, having been mugged by two sheep on the Yorkshire moors. They were after my cheese sandwich, but had I had money….

Hollywood once made a film about giant killer Rabbits – Night of the Lepus. They had a real job on their hands turning rabbits into creatures of horror. Welsh Sheep, now that’s a different story—as is the book by Katrina Monroe 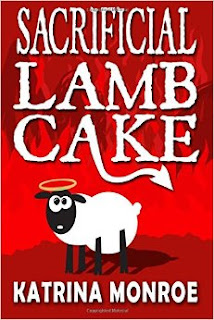