Flat on my back as the Actress said to the Bishop. 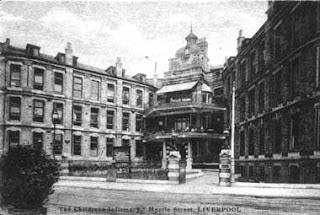 This is the wonderful Myrtle Street Children's Hospital. I think it's a magical building, it was even spookier inside - but in a nice way.

I don’t remember this, only what my mum told me. I was being walked back to school. I was tired; my legs were aching and I was dragging on her arm. My mum thought I was whining over nothing and felt guilty about this for some time after. That same night I was in Myrtle Street hospital diagnosed with rheumatic fever. I was there for over eighteen months, the first year flat on my back. I was told the nuns and children of Blessed Sacrament prayed for me everyday, but I was also blessed with penicillin that was being used for the first time to treat the disease. Up until then rheumatic fever permanently damaged the heart and its sufferers usually ended up in wheel-chairs. I’ve never been particularly good at sport, but other than that I made a complete recovery due to prayer, penicillin, or a mixture of both.


I have vivid memories of my time in bed, most of them good, some of them less so. My first Christmas got off to a poor start. I remember waking up at about six in the morning. The ward was bursting with excitement, children bouncing on beds - or at least sitting up; the sound of paper ripped from boxes. I inclined my neck as far as it would go and scanned the foot of my bed. Nothing. No bulging pillow case, no pillow case. Nothing.

I just lay there…eating a mouthful of breakfast when it came, rehearsing my bitterness for my mother’s morning visit.

And I still can’t get my head around this.

My presents had been there all the time - at the foot of my bed, but on the floor and out of sight. And no one had told me. The taciturn spirit is vastly over-rated. Why had no one told me? I remember my mum’s puzzled face lifting the pillowcase stuffed with presents from the floor; I remember hugging it, as best I could on my back, confused, unable to switch off the bitterness but dazed with relief. (These are later words. I was only seven at the time, but I remember the feeling)

Myrtle Street Hospital was a wonderful place once you got used to it. I loved waking up at night and turning my face on the pillow so that I was facing the entrance to the ward. There was a small desk there bathed in a dim, golden light and the nurse on duty appeared as a blurred silhouette - about the size of a large beetle. It was a long ward, and I was at its furthest end. The door would occasionally open and the matron, sometimes a doctor, would come in and sit with the nurse and talk, and I would strain my ears trying to catch a word or two, but they always spoke in whispers and I would fall asleep wondering what it was they were talking about. I loved the silence of the nights, the early morning smell of breakfast cooking. Only sometimes people died.
I’ll talk about that tomorrow.
Posted by Mike Keyton at 13:26