I like the way things change and stay the same. 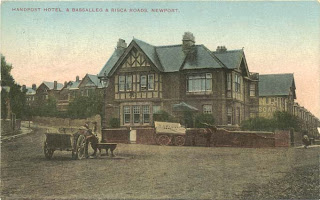 This first picture shows The Handpost in one of its earliest incarnations. 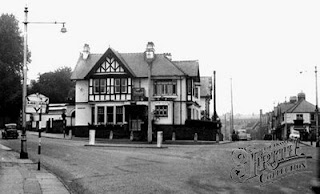 This second one shows it in the 1930's. Manley Road is just off picture middle right. As you can see the pub was handy walking distance though I soon developed a taste for more interesting pubs. 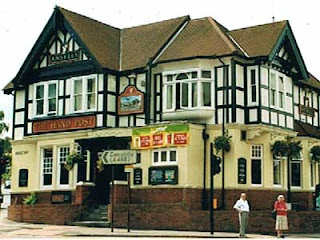 This is the Handpost today.


I’ve always liked dark and pokey little flats, which is just as well. The top floor of 3 Manley Road was a dark and pokey flat that even a necromancer seeking obscurity
might well have turned down. It had a blue carpet that fluffed blue dust with every step and a kitchen the size of a large spittoon. The main window, again quite small, showed a sea of grey tiled roofs. There must have been a toilet but I can’t remember where.

In the flat below was a beautiful woman with red hair who worked for an insurance company, but she soon moved out and was replaced by Gareth Williams. He had the air of a Restoration rake and drove a white van for a paint company based in Pill.

I still remember my first week-end there, how low I felt. Maybe I hadn’t yet found the toilet, or maybe I was beginning to realise I had committed to a profession that would turn my soul to chalk. Maybe I was just scared. At that moment there was a knock on the door. It was Adrian Jones, revolutionary socialist and future Mayor of Wallasey. I’ve always been blessed with angels, revolutionary or otherwise.

We went to the Hand-post but he soon became restive.

“Let’s go to the Six Bells, he said. It’s bursting with nurses.”

And it was, and it was wonderful, but the beer was crap. Ansells.

The Six Bells was a nice little pub, sitting directly below St. Woolos Cathedral from where it might have got its name. Equally probably it was named after a nearby mine. Names are important; they reinforce a sense of place and you tamper with them at your peril. It was later taken over by a whizzy but brainless chain and renamed the Duck and Firkin – or something equally pointless.. Nurses still went there and the beer was just as bad.
Posted by Mike Keyton at 05:20