Tony was on the ground. My knees were on his shoulders, holding him down, and I was banging his head on asphalt. We were surrounded by a forest of legs and shrieks of excitement. Then an old lady pushed through and shouted at us, pulling me off.

The next moment Tony was on top of me, pounding my head on the ground and so it went on for most of our childhood. Rivalry. For most, Chess is a game. For us it was the Hundred Years War, each game meticulously recorded - at least in our minds - in order to prove who was Grand Master. I still shudder at chess associating it with headaches, blood dripping from fingernails.

Flash forward fifteen years: we were walking through the bar at Swansea University, Tony’s first visit to where I was studying. The University, not the bar. The bar-lady looked up from polishing a glass and said. “You two are brothers. I can see it in your faces.” Too true, I thought. And I have the scars to prove it.

The problem was, or I imagine it so, that a natural hierarchy had been up-ended. I was the elder brother in name but in reality, positions had been reversed after two years spent on my back.

Childhood is both hierarchical and cruel. Peer groups demand conformity. For Tony it was tough, too, having a brother who wheezed and puffed and ran like a three-legged dog. I was the outsider. ‘Outsider’ has a nice ring to it for the romantically inclined. It’s less attractive though between eight to fourteen. Embarrassing for the brother, too. I clung to the story of the Ugly duckling and it somehow worked out. Things eventually do.

Hierarchy breeds cruelty. My own son as a child experienced quite savage bullying. Then another boy arrived at the school who also became a magnet for the dominant peer group. Without really thinking about it, I suggested to Thomas that maybe he should make friends with the new boy. Thomas was halfway up the stairs at the time. He turned and I can still remember his half-guilty smile and the look in his eyes that maybe his father was more of a fool than he thought. “They’ve stopped picking on me now,” he said. And you want that I go make friends with him? The thought was unspoken.

Been there, bought the Tee Shirt. Another window to the past: ‘Sugar-butty’. A pale-faced boy with glasses and protruding teeth. We called him ‘Sugar-butty’ because he’d once confided that white bread spread with butter and sugar was his favourite food. He lived halfway down Wyresdale Road and he was a deeply vulnerable boy. The gang turned on him joyously and I felt relief. His mother was in despair. I think as you grow older you cry more easily, especially when you remember how cruel you were as a child.
Posted by Mike Keyton at 07:49 No comments:

A hand touched mine.

I had to go to the toilet, but the bed was warm. I turned, and turned again but couldn’t get back to sleep. I had to go. I eased myself down from the top bunk, missing Tony’s face by inches and opened the door to the landing. The dark was icy cold. Directly ahead was the bathroom. It gave off a dim bluish glow, moonlight on porcelain and blue patterned walls. I walked cautiously, past our parents’ bedroom and stretched for the light switch. A hand touched mine and then quickly withdrew. I jumped ten feet and ran quickly to bed. It was Doris.

Doris was my Dad’s sister, born in 1889 and when we were children, a strange silvery haired old woman. She had once been pretty and according to some stories disappointed in love. Now she was just strange and slightly spooky. She lived by herself in the back bedroom. She didn’t use electric lighting because she believed bulbs emitted harmful rays. And she didn’t come down to share our small kitchen preferring instead to cook in a large iron cauldron over an open hearth fire. The top of the house was full of smoke and shadows, flickering light. In the dark we would sometimes hear her mutter.

I don’t know what exactly went wrong. Our mother was kind, almost to the point of softness but there was no love lost between her and Doris. No blazing rows as I remember, but a sense of distance that was passed on to us. It is pure conjecture as to whether Doris resented our mum for usurping her place at 14 Ribblesdale, the terraced ancestral home of the Keyton family. Maybe she disapproved of her brother marrying a Protestant. Something we’ll never know. What I do know is that our mother had a hard enough time with her husband always at sea and two boys at home that always seemed to be fighting. She didn’t really need a strange old woman living in a dark and dirty room and prone to causing small fires in the middle of the night.
Eventually Doris was committed and taken away frail and confused. No one went to visit her, but it is too easy to regret in hindsight. She died two days after our father.
Posted by Mike Keyton at 07:55 No comments: 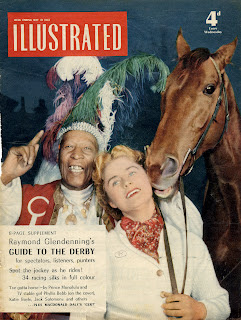 Prince Monolulu, a horse, and I don't know who the woman is.

There used to be a pub outside the main entrance to the Race course. It was called the Sefton Arms and has since been replaced by something horrible. The original Sefton Arms was a large ramshackle affair wreathed in smoke and beer fumes, and looking like something from the pages of Dickens. On Grand National Day its doors were opened and inside it was packed with winners and losers and women who catered for the needs of both. People drifted in and out of the smoke, including small boys who’d make for unguarded or forgotten drinks and down them before anyone noticed.

Outside the place was packed and you could hear from some distance away the voice of Prince Monolulu, a self styled chief of the Falasha tribe of Abyssinia. In reality he was Peter Carl Mackay born in the West Indies and at the time the most famous black man in England. Dressed in feathers and colourful robes he’d stand outside the course shouting “I gotta horse…I gotta horse…!” and make his money by selling inside knowledge and tips on certainties. Every so often there’d be rumours of famous Americans whose faces we’d pretend to recognise, convincing each other in the process. Gregory Peck came more than once but he didn’t have the charisma of Prince Monolulu.
Posted by Mike Keyton at 14:39 4 comments:

Eyes that were looking into mine. 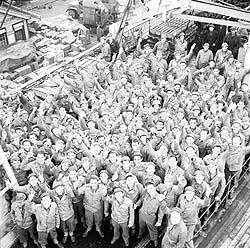 American soldiers landing in Liverpool enroute to their new camp at Aintree. For an eyewitness account of their journey through Walton Vale read here.


His face was red and growing redder. Veins bulged above and beneath the rope digging into his neck. Engines revved and the two jeeps pulled at each end of the rope and I half closed my eyes, expecting to see the man’s head pop away from his body and fly high into the air. But the man remained standing, snarling in triumph. He didn’t look human, more a lump of muscle with a shaved bullet head and eyes that were now looking into mine. This was my first memory of the Grand National and it frightened the life out of me. I was about three or four at the time and for some time after dreamt about a fierce red face that suddenly exploded. We went to the National every year but I never saw him again. The Grand National was the social event of the year in Liverpool - especially its off-the-course activities, and it all took place a few hundred yards from where we lived.

During the war years there was little call for horse-racing and Liverpool was too dangerous for American celebrities to visit. Instead Aintree Racecourse became a giant camp ground for infinitely more useful people, American soldiers. One of these soldiers was Ralph - a nephew of my grandmother - the American branch of the Henry family. He called several times at my grandfather’s at 24 Helsby Road. Once he borrowed ten shillings - but what that has to do with the Grand National, I don’t know.

More tales from the Races tomorrow.
Posted by Mike Keyton at 07:33 No comments:

He was still being followed. He fingered the Lugar. His lips tightened. If all else failed there remained the cyanide capsule lodged behind a back tooth. Don’t look round. He crossed the road barely in time, swerving left to run beside the truck that had so nearly run him over and swerved again, right this time, down the alleyway that ran parallel to Warbreck Moor. His eyes scanned the desolate lane. Not even a cat moved. Someway in the distance were a row of bins. Something to hide behind. His pace quickened. There were footsteps behind him. Remorseless and fast. Oberfuhrer Gessler. He dived behind the nearest bin sending the others crashing along the cobbles. His Lugar was out now, the capsule resting between two teeth, waiting to be crushed. He thought of Gabrielle and glanced longingly behind him at an alley that seemed to stretch for ever. So close.

“Mike, do you think you’ve passed?”

“Hope so.” I slipped the Lugar into my pocket, swallowed the mint.

It was unlikely though. Despite every hope I knew I hadn’t passed. Had known from the start. Those who would pass were in a different class, the same building - a long prefabricated building separated by a thin partition - but a different class. They were taught by Mr Fylde, a lean man with glasses and a jacket of grey tweed. We were taught by a motherly woman who wore a brown cardigan. We were the non-hopers, and I, having lost two years of schooling, was at the bottom of the heap. Both Sister Philip and Sister Kevin were very conscientious. They took remedial reading which was conducted across a brilliantly lit billiard table in the Men’s Institute adjacent to the school. We turned the pages of our ‘Janet and John’ books as directed by which ever nun it was, who would touch our nose with a billiard cue when it was our turn to read.

The Eleven Plus exam was taken and failed, the school sorting out the sheep from the goats. I envied most the shiny leather satchels and the new bikes given to those who would now go to Grammar School. Vaguely we knew that they would go to University and become doctors and lawyers, even wear tweed jackets. We would go to Secondary Modern Schools and do dirty jobs, though even that was a challenge because our Catholic Secondary Modern hadn’t yet been built. So it was goodbye to Gabrielle Moffat, my first great love (she never knew it) and another four years at Blessed Sacrament before, at fifteen, I'd finally be released. Or so I thought.
Posted by Mike Keyton at 08:03 No comments: