too hot to be a Hippy

I was in a dark narrow room, a pension in Tangier, shared with a thin but muscular hippy. He was the real thing, or so it seemed to me. I’d met others in Marrakesh, who’d spent their fare home, but retained enough to get by where the living was cheap. I had sold my watch to afford the early morning ferry Algeciras. Somewhere in my pocket was a train-ticket to Bilbao, but insufficient money for the ferry from there to Britain. I understood then the attractions of staying in Marrakesh.

“I will wake you up in time for your boat.” I can’t remember his accent. It may have been German. He needn’t have bothered. An early morning sun and the wailing of a muezzin from an adjacent Minaret did the trick. I opened my eyes to see him (the hippy, not the muezzin) sitting in a yoga squat humming gently. “It is six o’clock,” he said, and held out his hand. Real life hippies needed paying, I realised, but I had no money.

I shrugged and rolled up my sleeping bag. He shrugged in return, and resumed his low humming.

On the quay-side I decided to tackle the problem of how to pay for the boat-fare to England. I had a canvas sack of presents: beads, small drums, stuffed camels, small ornaments. I spread them out on the ground and squatted like a hippy in trouble but too cool to care. The good news was I sold them quickly; the bad news was it hit me that I wasn’t a hippy. I wasn’t cool. I was hot and bothered, eager to get back home.

I wondered what made a real hippy: the supply teacher in Liverpool who had inherited his mother’s house, brewed wine under the stairs and did just enough work (including a nightshift in Minster Minerals) to get by? The retired couple who lived in a caravan on the cliffs of Algeciras? They were nut-brown, sinewy and thin. They lived off bread and honey and small pots of yoghurt, and spent much of their time staring in contentment across the straits of Gibraltar. But me…? I had a degree course, a rented house in Langland, King Crimson and endless games of ‘Sweaty Betty’ with Brian and John² Andy, Ian and Mick, and Sue. But first I had to get there.

I packed what remained of my presents, mostly stuffed camels – not a big seller – into my sleeping back and boarded the ferry, not realising there was a Spanish policeman on the other side with a peculiar interest in my anatomy.
Posted by Mike Keyton at 04:59 No comments:

Many elderly and very respectable Victorians professed shame and bewilderment for the excesses of their youth during the more hedonistic Regency period. Some offered excuses. None of that here. Mind you, if I was to go back in time and meet my former self I know I’d be irritated as hell with him, and he in turn would be appalled at what he’d become. He’d also be relieved at the relative prosperity he’d later enjoy, frightened at the sacrifices. No, the young Keyton was a suck it and see hedonist – naïve, in many respects stupid, but too scared not to try.

The only negative decision I consciously made was not to experiment with acid. I’d read somewhere that it re-arranged your brain-cells, and I was too egocentric to risk changing mine. Stupid, too, since beer does the job more effectively by killing them.

Most of my time in Marrakesh was spent in a narcotic haze. The day began with fresh bread, honey, and a slab of hash cake washed down by mint tea. The effect kicked in midmorning and was maintained by smoking it until late evening. The day ended with a thick bowl of vegetable soup in the main market square. 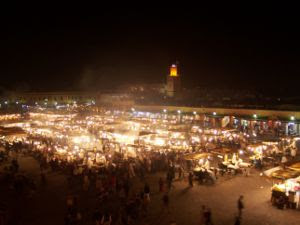 That in itself was hallucinatory enough, smoke and small fires, drums and dancers, acrobats, story tellers flickering in shadow, strangers pushing you this way and that, and above, a brilliant African sky.

The youth hostel never lived up to its promise but the hash did. One night I lay down on the narrow camp-bed and stared up at a less than brilliant ceiling. Slowly my eyes closed and I felt my body grow numb. It began with my toes and then feet, slowly spread upwards, until all that remained was a torso on the bed. My legs enjoyed a parallel existence; they were no longer with me on a grimy sheet in Marrakesh. The numbness spread until only a head remained, and I remember grinning until that option too was removed. Not even a head… on a pillow. Disembodied, floating in space. And still the numbness spread until only a tiny spark remained – me – whirling in a heavy and rolling darkness. It was better than ‘Space Mountain’.

I can’t remember if I slept and then woke up with all my limbs intact and in the right place, or it was gradual process of coming back down to earth but it was like nothing beer or even the finest whisky could hope to replicate.

There are horror stories of ‘soft’ drugs leading to ‘hard’ drugs but I think that is more a mix of temperament, genetics perhaps, but more probably peer-group pressure. When I eventually returned to Britain the only mild craving I retained was for tobacco which vanished after three cigarettes.

Of more immediate concern was money. My lack of it. Gradually it dawned on me that eventually I’d have to return to Britain…and walking it might take forever.
Posted by Mike Keyton at 13:08 1 comment: