David Beckham  bought a vineyard in California’ Napa valley as a birthday present for his wife. Brad Pitt and Angelina Jolie have a £41million vineyard in Provence. I’ve yet to sample Brad and Angie's produce, currently on sale in Marks and Spencers at £18 a bottle. I have though tried Cliff Richard’s Portuguese wine, which isn’t bad at all, especially when bought by others.

But none of these celebrities can aspire to the dizzy heights of Sting. In the interview I read, he reaffirmed his macho Northerner credentials by reminding us he was brought up on beer. Then it all begins to become quite surreal.

Prince Charles got some stick for confessing that he talked to his plants. Sting goes one further: “I go down and play to the wine. I practise down there. And you know, if I play it true, the wine tastes better.”

But Sting takes no chances on his grapes getting the jitters at an over-enthusiastic rendition of ‘Message in a bottle’. His vineyards are ‘bio-dynamic.’  His bio-dynamic adviser believes the vineyards should be treated with cow dung and dried quartz,  previously stored in buried cow horns. Additional fertilisers include flowers fermented in cow’s intestines.

Wine tasters are seriously going to have to up their game when it comes to swilling and spitting and verbalising what they’re ‘getting’ in their mouths.

Don’t let this weirdness fool you though. It brings in the money. Sting rents out cottages at £7000 a week. These privileged customers have access to forested lakes, a swimming pool, a chance to dine in Sting’s wine cellar and, if they’re lucky, the occasional serenade by the great man himself.

Most people pay others to harvest their olives. On Sting’s 9000 acre estate guests pay him £262 a day to pick olives for the therapeutic experience. I have two great damson trees. I would only charge you a tenner for picking and stoning them. Therapy of course. Feel free to pay more.
Posted by Mike Keyton at 07:07 2 comments: 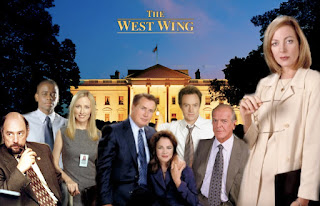 Two days ago I was persuaded to have a ‘West Wing’ binge and watched six episodes all in one go. It’s not healthy. I was happy enough until then.  It does strange things to the psyche.
Had I ever realised before that I loved Alison Janney? A disturbing new development. I was with little Danny Concannon, the newshound, wanting her to extend from her great height and kiss him. This is not healthy, not healthy at all.

Then there are the characters: Toby Ziegler, forever stroking his beard and looking quizzical.

Leo McGarry, the cynical timeworn chief of staff with the bewitching smile, the zealous Josh Lyman for whom the Holy Grail would be just another good cause. I’ve been told I should be more like Sam Seaborne, straight of back and wearer of good suits. To me he looks impossibly smooth and always looks puzzled. The two may be connected. 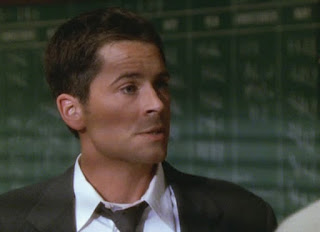 And then at the top, the visionary Josiah Bartlett, the best president America never had; erudite, fiery, heart superglued in the right place. At the end of each episode he reveals why he is so revered by all who come into contact with him. This is usually preceded by warning music. Then the eyes . . . the stirring speech, sometimes just a few words, a hand on the shoulder.

I realise now that this is what I should be aiming for: slim, cool and tall, impeccably dressed and a fast walker, spewing out one-liners like a Potomac machine gun, but also mellow and wise with a heart the size of Manhattan.
I’m working on it.

The marchers led by their soon to be famous mouth organ band.

In 1932 Palmers the shipbuilders collapsed and three quarters of Jarrow found themselves unemployed, and remained so for most of the decade. In 1936 there was talk of building a modern iron and steel works there, but the British Iron and Steel Federation blocked it for fear something modern might threaten existing more archaic plants.

Jarrow sent deputation after deputation to Sir Walter Runciman, President of the Board of Trade to step in and get the plant built. They were asking the wrong man. The socialist, Ellen Wilkinson called him ‘One of England’s minor disasters. For him nothing can be done about anything.’ She was right. Runciman’s cold response:  ‘Jarrow must work out its own salvation’ sparked off the Jarrow March on London.
Ellen Wilkinson of the ILP 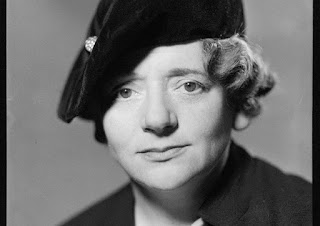 It’s interesting that the spark was that of a Pontius Pilate washing his hands and looking the other way. It’s depressing that the two great ‘moral’ organisations of the realm, the Church and the Labour Party acted in a similar manner. It’s also instructive that real life politics cannot be easily divided into good guys and bad guys.

The Mayor of Jarrow, Bill Thompson insisted that it shouldn’t be a ‘hunger march’ but a ‘crusade for jobs’. He insisted it should embrace all parties and got in touch with Conservative controlled councils along the route of the march.

They walked twelve miles a day over four weeks in all weathers, sleeping on the bare floors of drill halls, schools or church institutes. The Boy Scouts lent them a field kitchen, and an unemployed barber trimmed and shaved them enroute to ensure they looked presentable. 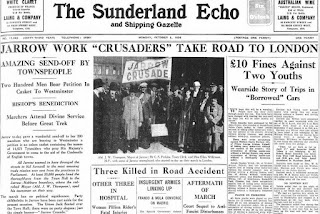 The first betrayal began with a service of blessing. Dr James Gordon, the suffragan Bishop of Jarrow, along with ten other clergy representing the different  denominations prayed for God’s blessing on those taking part. When the bishop of Durham, Gordon’s senior discovered the march had been blessed by the Church he was furious and forced Gordon to publicly recant via a letter to the Times. The official response of the Church was now condemnation. 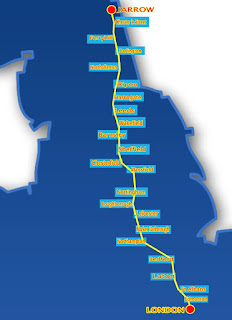 You might have assumed the Labour Party and the TUC would have supported them, but no. Both organisations were wary. Hunger Marches were associated with communism so they hurried to distance themselves.

They instructed local branches to refuse any requests for help from the marchers. Some Labour delegates attacked the diminutive (five foot four inches) Ellen Wilkinson for sending ‘hungry, half-clad men’ on a march to London. They suggested that a documentary should have been made instead! Far less offensive. 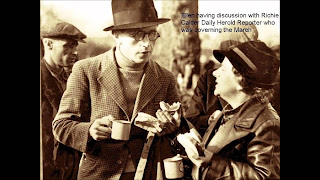 Ellen Wilkinson talking to the journalist Ritchie Calder of the Daily Herald.

There were exceptions. A few Labour areas disobeyed the directive to withhold help and support. At one stop the local Miner’s Institute provided scones and ham sandwiches. One man extracted the ham from his sandwich and posted it home to a family that hadn’t seen meat for weeks. 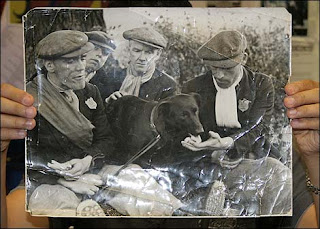 In contrast the marchers were given shelter and food from every Tory Council they passed through. In Tory Harrogate, money was thrust into the Marchers’ hands and banners were unfurled welcoming them. At Leeds the Lord Mayor and the President of the Conservative Association provided a “sumptuous meal’ of roast beef and Yorkshire pudding washed down with good beer.

The Labour Party’s disavowal of them hurt. Condemnation from the Tory dominated National Government they expected. The support from the Tory heartlands they didn’t expect.

In Sheffield, the Tory Agent wished them well as they set off and rounded off his speech with: ‘We are told you will not be received by the Powers-That-Be. To the Devil with that. Your march is a good thing in my opinion, and whether my Head Office likes it or not, I don’t care.’

In contrast the Labour controlled Chesterfield refused every request for help, forcing the marchers to seek the support of local businesses and Conservative Associations – which they got in abundance.

The government briefed against them, hinting at the dangers of violent insurrection, but realised the game was up when even Lord Rothermere’s Daily Mail came out in open support for the marchers. London’s Labour Leader, Herbert Morrison did not, refusing to speak at their rally. 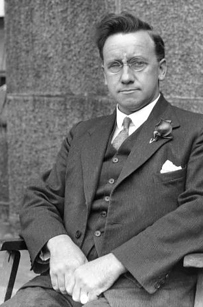 Herbert Morrison. In the words of Churchill, ‘a curious mix of geniality and venom,’ and reputed lover of Ellen Wilkinson.

The marchers  spent four days in London, Ellen Wilkinson leading them into the city on a particularly rainy day. Their petition was ignored. In the words of one marcher. ‘We got turned down. We got a cup of tea, they gave us a cup of tea. When we got it turned down in the House of Commons, that was it. . .  you knew you were finished.’


They returned to Jarrow as heroes and have since been appropriated by Labour as heroes, which is ironic really.
Posted by Mike Keyton at 07:16 No comments: 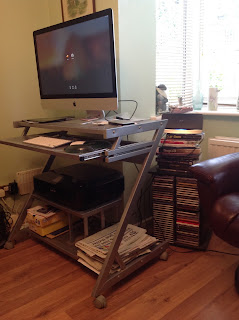 Unread newspapers are dust traps. They pile up and sometimes you think you will read them. You don’t but you hesitate over throwing them away. What might I be missing? Well yesterday I took the plunge. I picked a paper at random: The Times. It was pristine, untouched. December 27th 2015.
That’s the thing about old newspapers—they tell you what you know. Reassuring admittedly, that things haven't changed, but can be a bit boring.  I was about to give up, when I came across the blessed Caitlin Moran. Sometimes she’s tedious, other times blisteringly funny.

Talking about random discoveries she shared a glimpse into Gwyneth Paltrow’s life-style.

“In America, however, Gwyneth Paltrow’s lifestyle website Goop triumphed….offering the $244 Cedes Milano Toothpaste squeezer. . . (and) the portable vaginal steam-seat for a very reasonable $55. It seems like a good deal, tbh. You know what it’s like when you’ve been travelling, and you unpack your vagina and it’s all crumpled and creased. But a quick 20 minute steam knocks all the wrinkles out—and sees you descending to the bar looking crisp, businesslike and ready to take on the world with your crisp flaps.”

And what made my day—her quote of the year, this time from the timorous Heather Mills, talking about her prodigiously talented daughter:

Had I not kept those papers I’d have never have appreciated the full extent of self-delusion, nor heard of the $244 toothpaste squeezer. I would never have heard of the portable Vagina steam-seat. It would be a joy to see that advertised on QVC shopping channel; I’d probably be tempted, although I have no idea of its effect on those without flaps.
Posted by Mike Keyton at 07:51 3 comments: