So many things I missed about Swansea:

Richard Skinner who didn’t know you needed water to boil an egg but got a First in Russian, learnt Welsh on principle, went on to teach English in Sweden and became a doctor in Sweden through the medium of Swedish. Mercifully he regarded my more puny wit with amusement and a degree of benevolent tolerance, even though I was the one who taught him how to boil an egg.

Richard and Ruth Lewis who showed me that life could be comfortable and introduced me to Newport, a pint of Stella at the Green-man on the outskirts of Cwmbran followed by Sunday dinner, and, sometime later tea, with Paul Murphy, a future Secretary of State.

Peter Lloyd, now a script-writer, then an academic pursuing a PhD in Tudor History. I know he introduced me to Edward Hall’s Chronicle and a phrase that has lodged itself indelibly into my head. ‘History is the sucking serpent of ancient fame.’ Though, if you don’t have fame to begin with, you’re unlikely to be bothered by sucking serpents. Maybe the odd slow-worm.

Nick and Ness who showed me how rich life could be in a damp labourer’s cottage and later a caravan.

And last, but not least, Swansea University’s Refectory, its lamb curry, and spaghetti bolognaise. I sometimes dream about them at night and wake up hungry.

When you leave university it’s very much like jumping off from a fast moving merry-go-round. If you’re lucky you remain standing but most definitely disorientated. Certainty evaporates.

All I was certain of was an urgent desire to live in or near Swansea. Fate buggered things up a little.

A half-hearted application for a teaching post in Newport met with a polite rejection, until, a week later, the young woman who’d got the job discovered she was pregnant and withdrew. A polite rejection letter was followed by a swift request – we want to see you.

And so, despite mistaking the Head Teacher for the caretaker, and speaking with a still thick Liverpool accent, I got the job.

I’ve always been lucky in loving the places I find myself in. Aberystwyth was perhaps an exception, though the perpetual rain, a knife-wielding psycho, and a teaching course that bored me silly might have had something to do with that. But now I was in Newport, a vital, seedy place with its own dark magic. It suited me down to the ground. 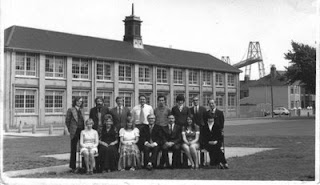 The elegant hippy to the left is me. How on earth did I get this job?
To my right are: Alan Hicks, Mike Farley, Alan Kethro, Andy Phipps, Peter Williams, Mr Norville, (the real caretaker)and Danny Flynn, someone else with a Liverpool accent. Front row are: Mrs Oakley, (known as Annie) Judith and Judith (forgive me). The man sitting in the middle is Bernard Dunne, (Head teacher, not the caretaker,) Gerry Drewett, Paddy Landers and Mia Richards. Behind us is the school, now demolished; and behind that is the famous Newport Transporter Bridge, not yet demolished, hopefully never.
Posted by Mike Keyton at 04:05 2 comments:

He squatted at the foot of my bed with a knife in his hands. “I’m going to kill you,” he said. I stared at him, still half asleep, and he stared back through pale eyes. It was Gareth, white faced and smelling of tobacco. He had lank greasy hair and a straggly moustache and he was moving closer, the knife pointing straight at my head.

It was the only bad thing about Aberystwyth; the only exciting thing.

Gareth was a frightening person, even more so when he was high, and I bunched up on the other end of the bed, cluching a pillow and ready to pounce, do anything really to avoid getting stabbed. I remember feeling puzzled and uneasy, scared too, but somehow not yet ready to believe I might actually die. There are some blessings in having a healthy ego. I wish I could remember how I talked him down from wherever he was. I do vaguely remember him walking off with two bottles of beer as payment for not killing me…for now. That was understood. I’m still waiting. The incident took place in the attic bedroom in 19 Custom House Street run by the vibrant and hospitable Mrs Abrahams. She made great breakfasts.
Directly outside was the Castle Inn and you went to sleep to the sounds of their jukebox – usually Hawkwind’s Silver Machine, or Buffy Saint Marie’s Soldier Blue, Credence Clearwater sometimes, and invariably House of the Rising Sun, which seems to have dominated every jukebox in the country for almost twenty years.

But Aberystwyth. Aberystwyth was so intensely boring. You walked. You drank. You sheltered from the rain. Summer was nice.

The only other flicker of excitement involved a promotional event by a beer company called Watney’s trying to foist their foul ‘Red Barrel’ on to the Students Union, a midnight walk with Dick Skinner and sundry others where we got ambushed by sheep, and two five star eccentrics who prepared us for a career in teaching.

Of course there weren’t enough schools for teaching practise in Aberystwyth so me and another were farmed out to Milford Haven where we boarded with a very nice piano teacher who claimed to have taught the daughter of Tony Curtis.

Because of my catering background the school, Milford Central offered me History and some teaching in Cookery, which thoroughly baffled Dr. Trot when he came to assess my lessons. It was like a scene from St. Trinian’s the girls grinning like maniacs, tossing pancakes like Frisbees. Doctor Trot was deaf, knew little about cooking but the girls had nice smiles, offered him pancakes, and the lesson went well.

Milford Central was a warm and friendly school, its discipline, like much of the 1970’s, based on cheerful brutality. There was only one cane in the school and it was passed from classroom to classroom as and when needed. When a child was sent for the cane he or she had to knock on every classroom door until it was found. It was a bit like ‘Find the Lady’. By the time victim had located it the entire school knew, so with pain came also an element of public humiliation.

After Milford came a sixth form college in Oswestry where I was taken under the wing of Bob Strachan and inflicted economic history on those taking A level. At Owestry I boarded with Sandra who undercooked sour bacon. I almost looked forward to getting back to Aberystwyth – even if it meant Gareth. 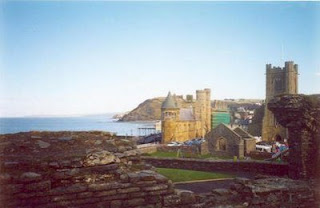