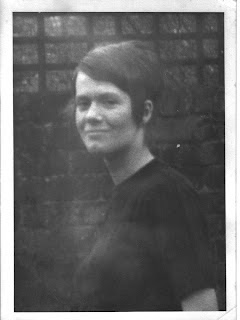 Last night I had a dream of Harry and Felicity Dowling. They were sitting on the pavement alongside a small bookstall, both dressed in brightly coloured clothes. Felicity was not the first great love of my life, but I went out with her briefly, largely because I felt it was about time I had a girl friend. It started badly. We agreed to meet outside the Cavern in Matthew Street, but she didn’t turn up. As she said later, she hadn’t thought I’d been particularly serious. The second time was more successful, but coming home on the bus, I noticed her face looked slightly yellow beneath the fluorescent lighting and I lost enthusiasm.

Harry Dowling was a working class Marxist who also enrolled at the Liverpool Institute for Further Education. Within a few months, he’d discovered the delights of romantic poetry, psychedelic shirts, and Felicity Corcoran. And shortly after that they married. I haven’t seen them since - except in that dream. Nor have I seen Shelagh Williams since then.

She taught me what it was to be in love. She could have sat under a ten-gig watt fluorescent strip, a face with the tonal quality of butter, and I would still have loved her. Fortunately she never put me to the test.

Shelagh had a lean, intelligent face with a wry smile and dark shoulder length hair. Her mother was a teacher, her father head librarian in Bootle Library and I realized I was scaling dizzy heights. Even her name, Shelagh, was spelt different to the Sheilas I had known.

Our first date would have to be special. She was educated, more cultured than I, intensely bohemian. I settled on Ballet - The Nutcracker suite, and read a book on what it was about. To my relief she settled on the pub.

It’s hard to recapture now the excitement in first holding her hand. I tingled in ways I’d never tingled before, but we’ve all been there, so enough about emotion and strange sensations. I just enjoyed being with her, even when she cut her hair short and took to wearing a grey pinstripe suit. My last abiding memory of Shelagh was at a party. She wore a black dress. Sergeant Pepper was playing, and we got gloriously drunk.

We split up when I was at University and I was heartbroken. I hope my own children never experience this, though the odds are they will…and then get over it.
Posted by Mike Keyton at 03:48 3 comments: 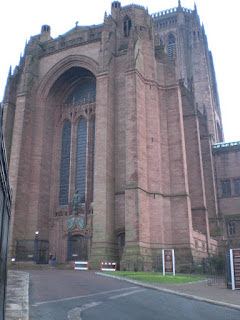 The Institute was an exam factory for anarchists and free spirits. Mrs Clough was one of them, a sixty year old student who’d just given up smoking because she wanted to live longer. Then there were Balbur and Daljeet Kanijar, two Indian brothers who were hopelessly in love with Lily, a diminutive pre Raphaelite blonde. It was a place where the unexpected happened, and sometimes sex. Toni was her name, an intense nervy looking girl in a blue corduroy dress. She had an interesting way of breaking the ice, unbuttoning the front of her dress and taking out a breast. ‘You can feel it if you want.’ Then there were those who were less sexy.

Mark Serralier was less sexy, a porky looking boy with black hair and a high pitched lisp. He claimed to be descended from Jessie James and King Zog of Albania. Worse, he believed it, which made him irresistible. My abiding memory of Mark is of him sidling up to us in Liverpool Central Library. The main reading room is a huge acoustic reservoir, a vast book-lined dome where a dropped pencil reverberated like a World War I cannon.

“Have you seen my new umbrella?” he whispered.
A thousand faces looked up.
We shook our heads, but said nothing.
“It opens out with a touch of a button.” (We’d never heard of such a thing!)
The devil spoke to me then. “Show us,” I said.
He looked round as one who hoped he wouldn’t be seen, then pressed down his thumb.
Metallic spokes exploded. It was like the crack of a hundred bull-hide whips, and he stood there, in the middle of the reading room beneath an open umbrella, waiting for rain or for the ground to swallow him up.

The place was an exam factory, the teachers cynical and dedicated at a time when you could be both. Notes were dictated, a two-year course compressed into one and we valued the teachers who spoke clearly, gave good notes and told it as it was. We’re not here to educate you lot; just learn the damn notes. As a teaching method, it can’t be faulted, except by progressives who find beauty in complexity.
The Institute was also a place of laughter and excitement. One window opened out onto sky and the gothic grandeur of a great cathedral. Below us was the hum of a Liverpool in ferment, and just a little down the hill was small seedy café where you learnt to make tea last an hour.

I learnt’ Sixteenth and Seventeenth century history from Mr. Radcliffe. He may be dead now, but then he resembled a prince of the church, a Cardinal Wolsey in a grey suit. He was fleshy, sardonic, good humored and cynical. Later I learnt English Economic History 1750 to 1920 from Bob Waring a man with the face of a battered cherub. He later became a Labour MP and grew less cherubic, though no doubt rich. For English I had Ms Fahey, a Catholic with a merry smile and a very sharp tongue.

Finally there was a tall thin man in a grey pinstripe suit. He was bald, and I think his name was Basil. He made the workings of the British Constitution even more mysterious, his notes a patchwork of random thoughts, biographical asides and finely tuned boredom. His real passion was Moral Rearmament a Christian cult that spearheaded the importance of the individual. I would have settled for decent notes.
He was more interested in making converts, focusing on those lads he thought had ‘leadership’ qualities. So I was spared. Tony McMullen however was not and went to his Hope St. Flat on a number of occasions to meet Mrs Basil (I wish I could remember his damn surname) for pamphlets and tea.

Portals have become cliché in speculative fiction, and we struggle to find new names to refresh a useful device. The Liverpool Institute of Further Education was no Star-gate but it was a magical portal - and thoroughly human. It whirled me from the kitchen to University and introduced me to the first great love of my life.
Posted by Mike Keyton at 07:31 3 comments: 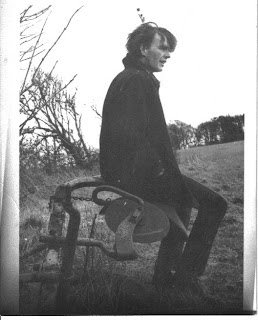 The young revolutionary...and erm...is that a horn sticking out from my head?


The first political book I bought was a biography of Lenin by David Shub. I showed it with some pride to John Ward, an active Young Socialist and electrician, who asked to borrow it. The following week I asked what he thought of it. ‘I threw it in the bin’ he said. ‘It was thoroughly rightwing.’

It would be neat conceit now if I was to use this anecdote as an early insight into a closed, totalitarian world, but as an earnest ‘class warrior’ and afraid of being labeled petit bourgeois, I swallowed the hurt. A true Leninist had to be disciplined.

My self-image, the man I aspired to be was ‘Strelnikov’ the Bolshevik zealot in ‘Dr. Zhivago,’ striding the streets of a revolutionary Liverpool, in greatcoat and boots. The reality I disguised from myself for as long as I could was the petit bourgeois spirit that had shaped me from birth. Grandfather Parry worked in the Docks but he was a man of aspiration. His father had owned a small business, his sister a ‘Ballroom Dancing School. Grandfather Keyton had died a Sergeant in the Boer war, his widow bringing up my father single handedly, and he in turn had risen from deck-hand to Chief Officer in the Merchant Navy. A Catholic education gave it the final gloss.

I read the book, Dr Zhivago and I remember crying (in private) when Zhivago lost Lara. I cry quite easily - Jude the Obscure did it for me some years later. My daughter’s quite embarrassed by it. I’m old enough not to be.

But then - the late sixties - it was a different matter. Bolsheviks were calculating and cold. I was Strelnikov lacking only the scar. We discussed Zhivago when the film came out and I remember the general sneer that the story in itself was trivial, ‘petit bourgeois’ - the masses were portrayed unsympathetically - the revolution revealed as an unnecessary inconvenience to the love life of a bourgeois doctor - and so it went on. I loved the poetry but said nothing.

By this time I was devouring the works of Trotsky, rehearsing his arguments, wishing that I too might one day be a great and inflammatory orator. And then I met Peter Taaffe and realised that someone had beaten me to it. Peter was a key figure in ‘The Militant’, a Trotskyite organisation that was infiltrating the Labour Party. He was a powerful and persuasive speaker with a habit of ending a provocative sentence with ‘…you know!’

The ‘you know!’ was delivered in the imperative, and the effect - in my case at least - was for my head to nod…of course I knew!

I began this post with the observation that it in many respects it was a closed and totalitarian world I had entered - and as hard as any cult to break out from - not because of any overt or sinister pressure on the part of those around me, more the guilt and habit of mind I had created for myself.

The Militant was, I know, monitored, almost certainly penetrated by our Security services; it had its share of scoundrels along with men and women of immense moral stature and strength of will.

I discovered eventually that I was no Strelnikov and that I cried too much to be a true revolutionary. I’d resented the Church telling me what to do, and now I realised I resented - really resented John Ward, telling me what books I could and could not read. Basically I hate being told what to do. No Leninist then. But I’m grateful for what ‘Militant’ gave me - belief in myself - an intuitive Marxist sense that life is largely governed by class, and an acceptance of my petit bourgeois heritage.
Posted by Mike Keyton at 14:06 1 comment: