I can escape Sharks 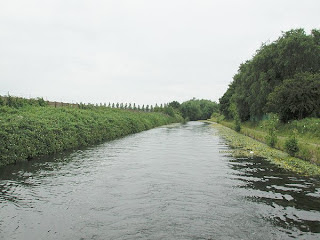 The Leeds and Liverpool canal where I learnt to swim 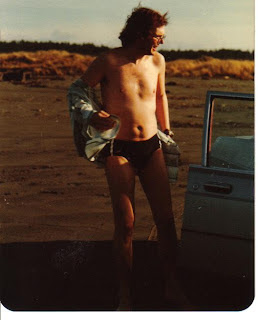 Undressing for the Pacific 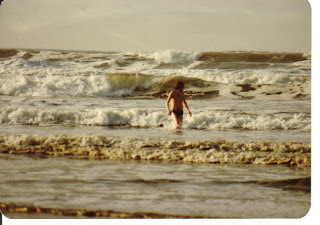 Claiming the Pacific for the Republic of Liverpool

My wife’s Uncle Dennis still goes into the sea, sometimes with sticks, at other times held. He’s in his late eighties and refuses to accept either his age or the stroke he suffered shortly after his wife died.

I admire him immensely and recognise a similar fear: I never want to be so old that I can no longer walk into the sea. Summer or winter, if I’m at the sea, I’ll go in the water. One day I might not be able to.

Proust had his Madeleine cakes I have water, and four particular memories that evoke its magic and potential.

There’s a very small bay on the Gower peninsula, close to Oxwich and hidden beneath steep sandstone cliffs. I left the friends we were with and swam far out, then lay on my back for what seemed like hours. I was in a trance-like state, floating in a green sea beneath red Jurassic cliffs. The sky was blue and empty and except for surf, the silence was complete. There was no reference to any particular century or millennia. I was in an empty world, a non-determinate time.
I toyed with fancies that something long and supple with teeth, something cretaceous might lunge at me from behind; romantic picture book thoughts, devoid of fear or possibility.

In 1982 I was somewhere in Florida. It was sometime after midnight and we were on the beach. The air was hot and sticky, the sea a milky blue, invitingly cool. I floated beneath the stars, aware of distant shouts from the beach, a glimpse of barbeque flames. Then the music started, mind music, fear music. DUM-DUM, DUM-DUM, DUM-DUM, getting faster and faster. And I was kicking, clawing at water, convinced that a great white was immediately behind me. I was out of that sea as though it were boiling, staggering across the surf-line in a self-induced panic. I flopped on to the sand and looked back. The sea was calm and milky blue, but I wasn’t fooled. Something was in there.

At least I was able to swim. When I was eleven, I couldn’t. We went to the Baths on Queens Drive and shouted and splashed a lot, but never swam.

And then suddenly I could.

It was a hot day and I was walking along the side of the Leeds and Liverpool canal. It passed close to Aintree Race-course and fascinated me with the thought that if I walked long enough it would take me across the Yorkshire moors to a place called Leeds. I never got very far - not this day at least.

Four or more kids were hiding in bushes, waiting for someone, waiting for me. They never spoke. They just rushed out and pushed me in, then ran away. I sank and spluttered, did all the usual stuff a drowning person does. Possibly shouted ‘Help’ though there was no one else around. I must have been kicking my arms and legs with some purpose because the next moment I was hanging on to the bank, catching breath for that final scramble onto dry land.

Next weekend I was at Queens Drive Baths, determined to put my new skill to the test. Pushed into necessity by four psychos I had taught myself to swim. Unfortunately it shows. With a style reminiscent of a walrus in labor, I am not a pretty sight, but at least I can escape sharks.

It didn't belong to this world 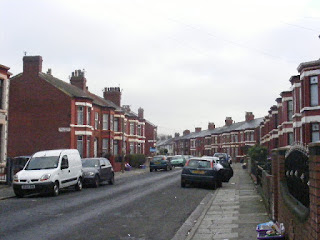 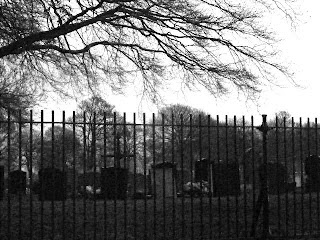 Turning left at the cemetery. 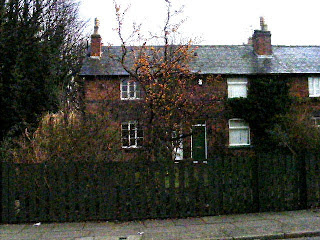 Wishing I lived in a house next to a cemetery. 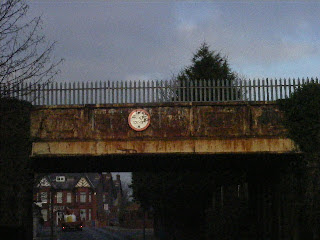 Under the railway bridge. 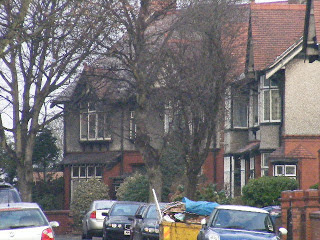 And down Roosevelt Avenue where Mrs Richardson taught us to play Little Brown Jug on mandolin. There was a great bank of Michaelmas daisies at the bottom of the road.

It was my daughter, and the shock came slowly. She’d said it as if she’d seen an alien, or Vladimir Putin skateboarding in the park. When was the last time I’d whistled? I raised the paper up to hide my face and tentatively puckered up my lips. They were dry and little or no sound came out - though enough to arouse suspicion.

As a boy I always whistled. It got me through the paper-round, that and a large mint-ball - though never at the same time. I tried once and almost choked. My range was vast and eclectic, the more popular overtures - (Ride of the Valkyries always posed a bit of a problem after the opening bars) - Gilbert and Sullivan, courtesy of my parents, Elvis, Jerry Lee, old English folk songs, and at Christmas, carols. If it had a tune, I’d whistle it.

There was no competition. There were no birds in Liverpool other than sparrows and pigeons, and they could only twitter or coo. Old ladies gave me generous tips; swore I was better than any alarm clock - so that was something else I was better than.

In the pre I-Pod age there was only the whistle and apart from waking up old ladies, it gave me the greatest gift of all: an ear for music. I read music like a Zulu reading Greek, but give me a mandolin and let me hear a tune once and I’ll have it almost at once.

The mandolin was another cul-de-sac when you consider it. In a Liverpool waking up to the Beatles before the rest of the world what was I doing with a mandolin? Blame it on Miles Hartley.

He’d bought one from a second hand shop in Rice lane. My brother Tony immediately copied him and bought a beautiful flat-topped mandolin for about ten shillings (a dollar). I wanted one and ran to the same junk shop as though there might be a never-ending supply. There wasn’t. I came home with a metal and skin monstrosity - something called a Banjolin. Not a Banjo-mandolin, but a Banjolin. It’s so weird it’s not even in the Oxford English dictionary; it didn’t belong to this world, but that’s what it was called, a Banjolin. And I hated it. We went to music lessons, me, Tony and Miles and played endless scales, and tunes that always sounded like ‘Little Brown Jug.’

There was a worse fate for Tony, worse even than playing ‘Little Brown Jug’ on the Banjolin. His beautiful flat-backed mandolin broke. He dropped it in Greenwich Road. He couldn’t afford another but still wanted to be part of the gang who were now famous throughout Aintree for their version of Little Brown Jug.

“There’s the piano,” my mother said hopefully, and he jumped at it like a doomed piranha fish.

Miles gave up the lessons and sometime later so did I. Tony was never allowed to. Mandolins were a cheap, slightly exotic fad but the piano was serious. Our Dad had decided. Tony would stick with the piano whether he wanted to or not.

In years to come I played badly in a Ceilidh Band, Tony played jazz piano for comfort, and two days ago I was staring over a paper at my daughter who’d heard someone whistle.
Posted by Mike Keyton at 07:15 No comments:

My Head in the Oven

I have always had a problem with ‘style’, and in my entire life, I doubt there’s been more than a four-year window of ‘coolness’. When all around me were flaunting their grey terylene trousers, I remained in grey flannel shorts. It was more economical and my parents conservatively believed that boys should wear short trousers. Jeans were unknown. Rumour had it that Americans wore them, though there remained still some doubt.


Hair was equally problematical for a boy who aspired to ’77 Sunset Strip’ cool but couldn’t afford the Brill-cream. My only recourse was to mould my hair into a long and fragile quiff with a wet comb, and then stick my head in the oven. The heat dried my hair like a potters kiln, and I would then walk to school very carefully, aware that an awkward step would undo everything. I can’t remember if anyone actually told me this ‘trick’ or whether I’d discovered it all by myself. If the latter, I wonder why…and more to the point - how?


The Beatles spared me from more years in the oven, but clothes remained a problem. It was no fun being under-aged, trying to slip into a cinema unnoticed - not in your dad’s pre-war mud-coloured sports jacket that looked as though it had come from Fred Astaire’s wardrobe. Retro-chic now. Not then. Not on a fourteen year old boy.


At fifteen, I took my first faltering steps into coolness in a cheap blue suit, black polo-neck sweater and black framed glasses. I was on my way to Blessed Sacrament Boys’ club where they had a table tennis table, orangeade, a small Dansette Record Player and two Beatle LPs. I was chewing my thumb - I don’t know which cowboy did that - walking slowly to be noticed. Unfortunately, a priest noticed me as I entered the club. He slapped me hard on the back, and in a loud booming voice that drew all eyes our way, told me there was no need to be nervous or shy. I took my orangeade, credibility blown. A blue suit wasted.


There was only one lesson left to be learnt. Shops are out to make money - especially in Liverpool. I saw the bold advert; the shopkeeper saw me coming. ‘Freddy and the Dreamers’ Cuban Heeled Boots’ - HALF PRICE!
Cuban Heeled Boots - so cheap. I had the money - just - and a moment or two later I was wearing them, walking down London Road at an acute angle, like someone battling against a force ten wind. ‘Freddy’ was a small Mancunian, who on Television always looked bigger than he was. Now I knew how. With heels as high as these he could have looked down on Big Ben - though at an angle.
Luckily my years in the wilderness were about to come to an end - or so I liked to think.
Posted by Mike Keyton at 09:36 No comments: