'We've got lots of killers'

In a Fox news interview some time ago, Donald Trump was asked to explain his respect for Putin. “He is the leader of his country,” Trump replied before pointing out he was also involved in the fight against the Islamic State terrorists.

The interview then pointed out that: “Putin’s a killer.”

It was a refreshingly honest thing to hear and if any President in the Sixties or Seventies had said it, he’d have been lauded by radicals everywhere. Times have changed.

Now the reaction was uniform and thundered from  every pulpit: A disgraceful thing to say! There is no moral equivalence with Russia.

Yes, hand on heart, I’d rather be living in America or Britain than in Russia. There is no economic or social equivalence. But moral equivalence?

Liberal democracy depends on prosperity, when that goes, the glove comes off. Sometimes the glove slips, as in the case of the unfortunate Doctor Kelly.

Dr Kelly, a government weapons inspector, threatened disclosure of the Weapons of Mass Destruction lie that took us into Iraq. Such a disclosure threatened the Blair regime and possibly British Intelligence.

On July 19th 9 am Dr Kelly’s body was found in an Oxfordshire wood. A mere three hours later Lord Hutton received a telephone call from the Lord Chancellor, a former flatmate of Tony Blair. Would he chair an inquiry into the death of Dr David Kelly?

Six months later the inquiry reached the conclusion that David Kelly had taken his own life: ‘…the principle cause (being) bleeding from incised wounds to his left wrist which Dr Kelly had inflicted on himself with the knife found besides his body.’  His report added: ‘It is probable that the ingestion of an excess amount of co-proxamol tablets coupled with apparently clinically silent coronary heart disease would have played a part in bringing about death more certainly and more rapidly than would have otherwise been the case

. . . I am further satisfied that no other person was involved in the death of Dr Kelly.’

It went on to accuse the arguments of dissenting reporters as ‘defective’ and absolve ‘Intelligence’ from responsibility for the advice that led to the Iraq war.

What were the ‘defective’ arguments of these dissenting reporters?

Some pointed out strange it was that Hutton was asked to chair his enquiry less than three hours after Kelly’s body was found and before any medical professional had examined it, before it had been formally identified and before anyone even knew how he had died.

Secondly, the ‘Inquiry’ replaced the traditional ‘Coroner’s report where witnesses give testimony on oath and thus removing any threat of being found guilty of perjury. In fact, there was nothing to worry about at all. Dr Kelly’s death certificate was presented five weeks before the Inquiry stopped hearing evidence, which indicates that the ‘authorities’ had already decided how he had died.

On top of all this, Hutton excluded dozens of key witnesses. One was a close friend of Dr Kelly, Mai Pederson a former U.S Air Force officer. Pederson revealed how an old arm injury prevented Dr Kelly from holding a knife properly, and that he suffered from ‘unexplained dysphagia’ meaning he couldn’t swallow pills.

Medical experts also questioned whether Dr Kelly could have died by cutting his ulnar artery which is so small it is impossible to bleed to death by cutting it.

There were no fingerprints on the knife even though Dr Kelly wasn’t wearing gloves—a fact known to the police, but not mentioned at the enquiry.

And finally, in the true spirit of —‘Move on, nothing to see here’ —Lord Hutton made a final but secret request to the state: All records not produced in evidence be closed to the public for thirty years and for all photographs of Dr Kelly’s body and all medical reports relating to his death to be sealed for 70 years.

I don’t know what makes me more angry: the killing of Doctor Kelly, the amateurish nature of it or the even more amateurish cover up, revealing a powerful contempt for both the public and  truth. So, yes, in this case Donald Trump hit the nail on the head.

But on a lighter note. Today is the feast day of Christina The Astonishing, a C12th Walloon who leapt from her coffin at her funeral and flew into the roof of the church refusing to come down because the stench of sin was unbearable. She went on to live in an oven and later a tree. And if you believe that, you’ll likely believe the Hutton Report.

Coming soon (as they say)

Coming soon to a kindle and bookshelf near you. 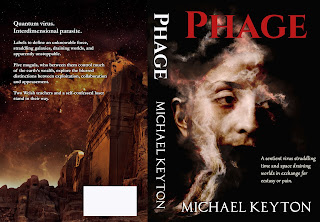 The final draft - the barcode yet to come

Sometimes a picture says more than words. Hmm, perhaps not a good idea to put it so bluntly. Why buy the book? Just stare at the beautiful artwork and the masterful blurb.
Never mind, it serves as an  excuse for such a short blog

Oh, and this, for anyone in need of a book-cover artist, look no farther than here.
Posted by Mike Keyton at 15:40 No comments:

How little you know

For me, if it exists, Purgatory would consist of reconciling every unkind word, thought or deed you’d ever experienced or inflicted on those you’ve met in the course of your life. And I’m a judgemental bugger so I’m in for a hard time. Especially so when I consider that I now know more people dead than alive.

That last point is something I try to remedy,  I've no intention of being a ‘Nobby-no-mates’ when it’s my time to say adieu.

With that in mind, there is a lovely prayer taught me by the nuns as a small child.

‘Eternal rest, grant to them, oh Lord
And let perpetual rest shine upon them
May they rest in peace
Amen.’

And, as a minor confession, I say it faithfully each night for all those in my life who have died.
And whether you believe in God or Purgatory or not, it’s far from being a worthless exercise.

Each and every time, it brings to mind how, in some way or another, you’ve short-changed or misjudged this person or that. It may be an act of selfishness remembered, how you could have treated a person more kindly or with greater respect. And with it, gradually,  you realise  the mystery of one individual's  life, how little you know or will ever know, and the importance of those you come across now. That final point is the ultimate lesson, I think.

The sermon is finished 😅
Posted by Mike Keyton at 09:10 2 comments:

Or a small fragment of it.

Last year, I described how rogue damsons had taken over the garden. They were charging towards the Conservatory like the German Sixth Army advancing on Stalingrad. 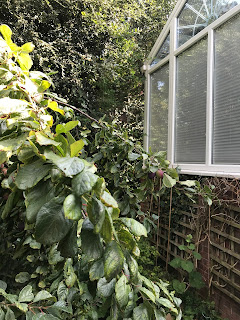 They seemed almost desperate to proffer their fruit, allowing us to stretch out of the window for an impromptu damson dessert. The problem was they had taken over much of the garden; that little strip to the left was all that remained. 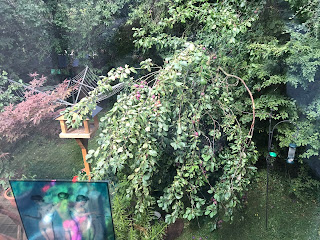 It was dense, almost impassable 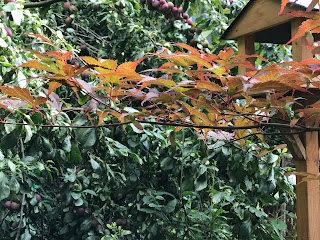 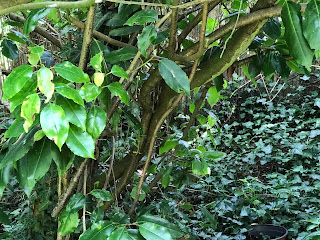 But here was out chief cause of concern, an old rotten shed succumbing to both. 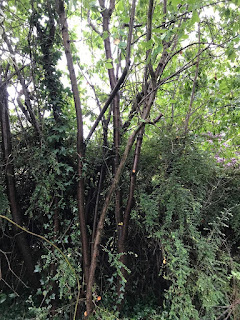 As described, last year we went at it with chainsaw, spade and fire. 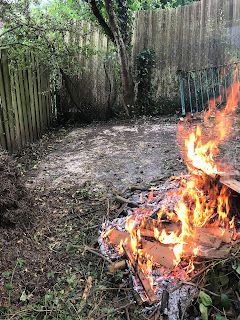 And ended up with Ground Zero 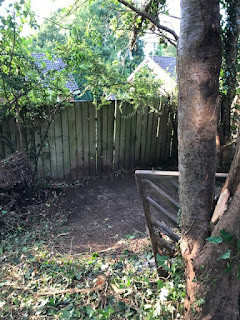 Early spring, the planting began so there'll be nothing spectacular this summer. But now we have a red and white rose bush growing against the fence (My wife is from Yorkshire and I'm a proud Lancastrian) We also have young Sidalcea, fox gloves, lupins and Canterbury Bells. There is more to come when more undergrowth is cleared. 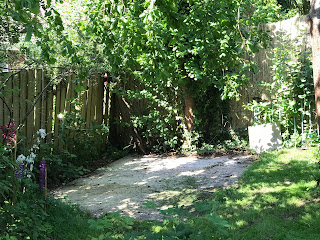 Bottom left hand corner is another newly planted rosebush, a Lancastrian/York hybrid yet to flower. 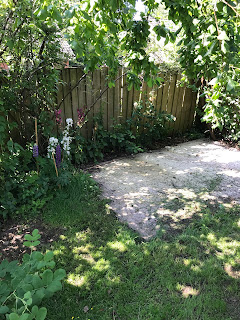 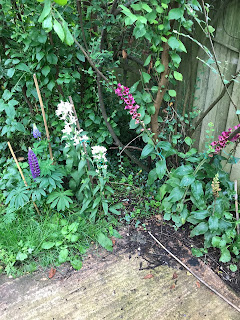 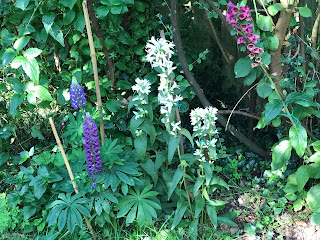 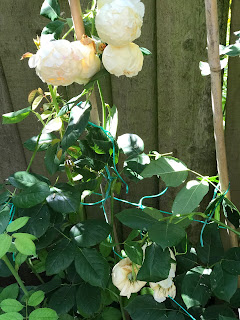 Some newly planted Delphiniums. I'm hoping for a dense cottage garden with hollyhocks, Blue Canterbury bells, more Delphiniums and perhaps some Penstemon next year. Also a much cleaner slab and a wrought cast iron bench 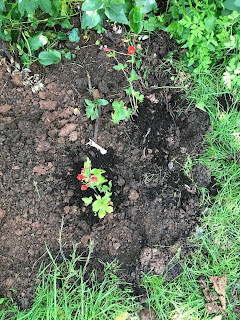 But this is my pride and joy, and what a weird thing to say: Grass. And not the hippy kind.  Weeks of hard shovelling and the ivy went. Two boxes of grass seed - one for the birds - and daily watering during weeks of sunshine and dry weather. 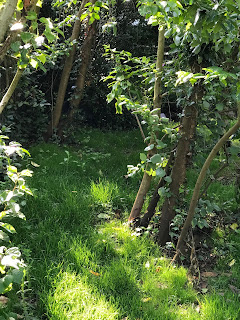 And not only grass - light and space 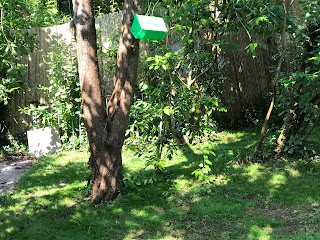 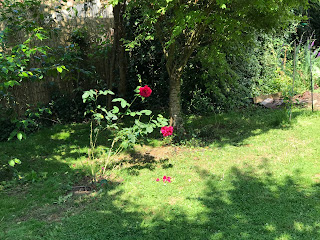