Don't believe all you read but...

The journey went on forever. The bus was hot, had little suspension and the seats were hard. We crawled over mountains; outside glimpses of paradise, deep sandstone valleys carved from water, and lush emerald green fields. Looking down I saw turquoise rivers and small brown children swimming and diving like thin dolphins. The water looked cold.

Inside it grew hotter. Occasionally the bus stopped in the wilderness. People got off; others materialized from thin air and took their seats. Sometime in the afternoon a small boy squatted in the central aisle of the bus and crapped on the floor. An American in front of me went ‘Wow,’ and turned the other way.

The hostel was a bungalow, once white but now the colour of porridge. There was a lawn, green and recently cut. It looked ominously quiet. The only evidence of naked sex was a toddler in a swimsuit watering the grass…still what would it be like at night…?

We opened the door and two disconsolate youths looked up as we entered. Both were from Bradford who’d read the same tabloid expose.

Don’t believe all you read, but enjoy the journey.
Posted by Mike Keyton at 03:20 No comments: 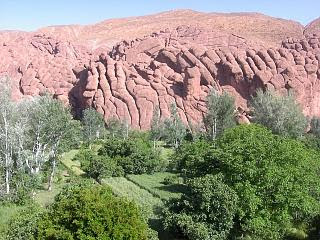 
A few days later I was in Tinghir, watching the bus disappear into a greying desert. It was late afternoon and I stood, scratching my head, in a small dusty square. It was then that a small boy approached. ‘You want to come to my brother’s wedding?’ I blanked him out but he was insistent, and then gradually, almost too late, I realised it was more than a scam.

I followed him into a maze of narrow paths and tall, baked-clay walls. The night was hot and black and I was walking into the past. Every so often, as though sensing my unease, the boy would turn. “You will like. You will like.” And I’d grin back, nodding my head, thinking Biblical thoughts, holding on to the story of the Good Samaritan. Occasionally John the Baptist would flash into my head, his eyes staring at me from a plate.

Imagine walking down this at night. 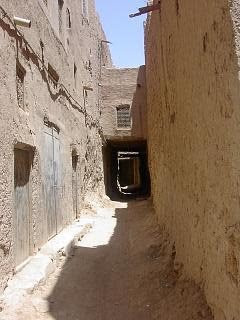 It began with the sound of drums and what I can only describe as a kind of joyous wailing. The drums grew louder and around the corner the wedding party came into view, bringing with it an army of shadows, eyes gleaming in torch light. The boy ran off and began whispering urgently to a white bearded elder. A moment later I was being hugged and swept away down yet more alley-ways to a small courtyard.
There were vast amounts of couscous and lamb, strange smelling pipes, and an absence of women. It seemed the wedding was an excuse for the men to party, free from any who might criticise. I wondered what the women were doing, and whether their party was as good.

And yet clearly their presence was needed - in one form or another. Drums started, followed by the sound of strings and pipes. An unconvincing woman materialised in the middle of the circle and began dancing. Osama Bin Laden in drag. She began pulling up people to dance alongside her. I smiled contentedly, puffed on the pipe, thinking how strange, how pleasant everything was - when suddenly a hairy hand appeared inches from my face. It pulled at my shoulder, forcing me up. A moment later I was dancing a peculiar version of the Twist to music more suited to a ‘belly-dance’.

Men-only-dancing was interesting, my dancing even more so, but that wasn’t the worst of it. The music went on and on, and so did I, wondering when the damn thing was going to stop. Imagine ‘Stairway to Heaven’ played twenty-three times…and continuing. What I didn’t realise - until almost too late - was that here the music didn’t stop until you stopped dancing - at least in this small village of Tinghir.
I slept blissfully in the company of strangers, slowly learning the lesson that hospitality costs little and is remembered forever.

The following day another village. I was sitting on an outcrop of rock. The village huddled in a terracotta landscape beneath a dark blue sky. Someone had seen me. A young girl trudged up the path, heading in my direction. She stopped two or three feet away and held out the most beautiful beaded necklace I’d ever seen. She named her price, which was pitifully small, and even more pitifully I proceeded to haggle. It was then that she gave me a look that humiliates me still, and makes me give that little bit extra to any and every appeal. She just looked and then turned, taking the necklace with her. I watched her retrace her steps and thought of all that she hadn’t and all that had been given to me. If I’d learnt nothing from Morocco, I learnt it now. A generous spirit makes life worth living.

This would be a good place to end, but there was one more lesson still to be learnt.
Posted by Mike Keyton at 06:59 No comments:

Generousity of Spirit - Part One.

Morocco was different. As soon as our feet touched the quayside we were surrounded by children speaking in tongues and begging. They were bright and sharp and maybe desperate. Within seconds they’d have your nationality and be bombarding you with any icon that might establish a bond. ‘Bobby Moore. I like Bobby Moore. Great footballer, the best.’
‘Elvis is King, right?'
'My sister likes Elvis’
'Charles De Gaulle, great man, the best.’
‘Australia. Kangaroos.’ Our loose coin went quickly, until eventually we walked through them, as though they were holograms. Money was tight and we didn’t have their talent if it ever ran out. 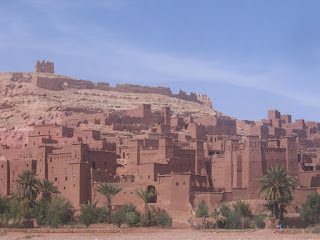 Some weeks later my money did eventually run out. It was in Quarzazate. The sky was a dark pink and I was wondering through the ruins of an ancient fort. A small boy appeared from nowhere, hand outstretched and smiling. I shrugged and pulled out empty pockets. Immediately the boy’s smile grew even wider. He pulled out his own pockets, also empty and patted me on the back.

There is a generosity of spirit in Morocco. That first day in Tangier we wandered through the winding maze of the old market. It was hot enough to dry spit. I made the mistake of pausing outside a small building, and at once a man materialised; he dragged the two of us inside. It was more oven than café with just enough room for a small table and four chairs. We were squeezed in and immediately craved the relatively coolness of the spit-dry street.

There was no menu, just meat, boiling away in a largest of large cauldrons positioned adjacent to the table. But it was cheap, and the two men manning the cauldrons beamed ecstatically, as though they were feeding angels.

This generosity manifested itself throughout the country and began to raise uncomfortable truths about my own capacity for meanness. Terry was heading for the coast and Agedir. I drifted inland.
Posted by Mike Keyton at 03:49 No comments:

I Recovered My Cool In Morocco 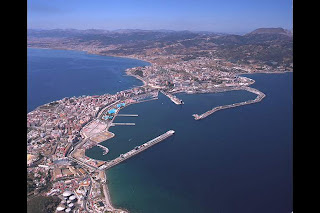 But first I had to get there. The Rock of Gibraltar is so close you think you could swim across to it, and on a clear day you could see the shadow of Africa on the horizon. We took the ferry to Tangier but were turned back. They were conducting a purge on ‘hippies’ and my hair was too long. That same day we ended back in Algeciras, me thoroughly pissed off and dreading the prospect of re-appearing on the beach.

The following day I wandered around Algeciras. For a time I followed a band of policeman marching to drum and brass. They wore guns in case anyone didn’t like the music and I kept my distance feeling like ‘The Prisoner’ and expecting the bouncing ball to appear at any moment. What made it so chilling and surreal was the fact that it was mid day and they were marching through empty streets.

Eventually we parted company and I wandered towards a cake shop that was sensibly shut. In the window was a large golden bun glistening in syrup. An over-weight fly drifted somnolently over the range of cakes, as if choosing, then spiraled and landed on the bun where it vanished, sucked in by the golden marsh. I watched to see if it would reappear, wondering about the currants in the other cakes, wondering whether one day there’d be a musical called ‘The Little Shop of Horrors’, wondering whether Algeciras would suck me up over the summer, and what lies I would tell when I eventually got back home. ‘Morocco, it was great.’

Then the Canadians arrived, brother and sister, and took things in hand. My hair was hacked off, and I tried to convince myself that I looked good in a loud checked jacket and a louder checked shirt. A day later we tried again, this time via Spanish Morocco and the port of Ceuta. The official took one look at my passport and its refused entry stamp by a rival bureaucrat. He smiled, and I knew I was going to be okay.

His gaze flitted from passport to me in my bizarre Canadian Costume – thank God I wasn’t wearing the trunks – and the smile turned to one of pity, perhaps respect for determination, sacrifices made, a startling haircut. With a wave he passed us through. I was in Morocco. The fly was still in the bun.
Posted by Mike Keyton at 02:22 1 comment: