There was rarely, if ever any crowd trouble at Liverpool or Everton matches, for one simple reason. The police turned a blind eye to the law. In those days licensing hours dictated that pubs shut at three pm in the afternoon and not open again until 5.30. The problem was Saturday football usually ended somewhere in between – so the pubs stayed quietly opened, siphoning off the huge crowds enroute to Lime street station. A law was broken but everyone benefited. Then, it may have been the 1980’s, a new and zealous Chief Constable enforced the law. The pubs were forced to stay shut. Thousands and thousands of thirsty people walked en masse the three or so miles to the rail station, and crowd trouble began. You need to know when to turn a blind eye – in the classroom, marriage, dealing with children – or in this case thirsty adults. When it ain’t broke don’t fix it.

With relaxed licensing laws, the ‘lockup’ has lost most of its magic. When I played with an Irish band in Newport, we regularly played at O Reilly’s on a Sunday lunch hour. The pub ‘closed’ at three pm, and the regulars including us stayed on drinking behind locked doors. The Liverpool ‘Lockup was much the same.

I went for a drink with my cousin, Michael McDonald, somewhere in Kirkdale I think. We didn’t get there until Ten pm, which worried me because pubs shut at Ten Thirty. I was introduced to Mike’s thirteen or so friends – then somebody bought a round – 14 pints. Bloody hell, I thought, we’re going to have to drink fast. Ten twenty somebody else in the group bought a reciprocal round…and then the ‘lockup’ began. I was choking down my fourteenth pint sometime around 1.30 in the morning. I had to go to the toilet.

Walls bounced as I clung for purchase, and an immense cloud of steam filled the latrine as I released the contents of an overstrained bladder. Four of Mike’s friends joined me, two on each side. We peed in companionable silence. Then someone asked me where I came from.

I had no answer. Just a pair of very wet legs.
Posted by Mike Keyton at 06:00 No comments: 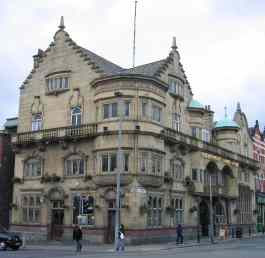 The entrance to the Phil 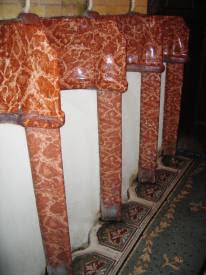 Doing it in style 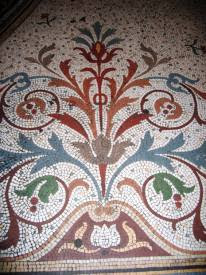 Mosaics on the floor. 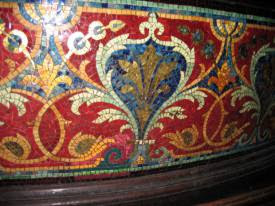 And if you get tired of mosaics

No not one of King Ludwig's Bavarian castles. The Vines Public House nr. Lime street station.

It’s impossible to dissect the magic of the Liverpool pub. I have drunk everywhere from the Cascades to New Orleans, London, Malta, Newcastle, Glasgow and some of the finest pubs in Wales, even New York. But nothing beats the Liverpool pub.

I went back recently after a decade or two of absence. We hit the Globe, opposite Liverpool Central Station. It was the Sunday Liverpool had just lost 1.0 to Manchester, which is a bit like saying God had just lost to the Devil. The pub was crammed with flesh, elbows sticking out of windows, bellies rammed against the bar.
When someone moved, there was a domino ripple across what was a very small room; a perpetual phenomenon as people made their way to and from the bar, sometimes risking the toilet – everything made well with immense and cheerful courtesy. Chaos and the Butterfly effect, only with beer.

Half the Liverpool Kop were there, or it sounded like, people singing, the rest bellowing to make themselves heard.

My son asked my how they celebrated when they won.

What can I say?

It was a blast-back to the past. Within ten minutes a young girl with long black hair, otherwise dressed in red was talking to us having spotted we were strangers there.

My first experience of a pub was a solitary pint of Double Diamond in the Black Bull, having told my mum I was off to Sunday Mass. It got better.

When I and Mike Adams were at Colquitt St. we drank in the Royal Albert in, I think, Seel St. the tables were of dimpled copper and Percy Sledge was for ever on the Juke Box singing 'When a man loves a woman.'

When I became a ‘student’ I moved on to the most magical pub in Liverpool. The Philharmonic. It was like walking into a masterpiece and becoming part of it. Even the toilets were special. Pissing was an event
John Lennon lamented the fact that he was never able to drink there again after he’d become famous. I lament the fact that it is now too far away for me to slip in there for pint. The beer was good, so was the talk, the company, but it was everything else, the mosaics and the stained glass windows, the plasterwork, the paneling in the different snugs. The only thing wrong with it was the Cocktail bar. Beautiful, but they would insist on serving you in half pint glasses.

Further down the road was O’Connor’s Tavern. It reeked of Restoration England, only seedier, and was presided over by a short, cynical bald-headed man who sometimes smiled when he thought of the money pouring over his bar.

Once, jaded by the opulence and fired by working class zeal, I persuaded Geoff Fimister and others in our group to go to a real working class pub. ‘Where?’ they asked, tolerant, amused, but not yet convinced.

‘It’d have to be good with a name like that,’ said Geoff. 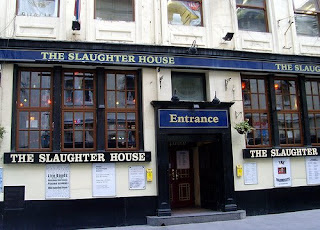 It was obvious something was wrong as soon as the door slammed behind us. Too late to escape. A room full of skin-heads, their heads swiveling, focusing on us, on our long hair, and me with my gold rimmed John Lennon glasses. Someone grabbed me by the collar and accused me of looking at him; someone else called me the Milky Bar Kid. It could have been worse.

I think we stayed for a pint, out of pride and then made our escape. Once again my judgment had been brought into question.

So I guess not everything in Liverpool is good.

Buses are for talking on 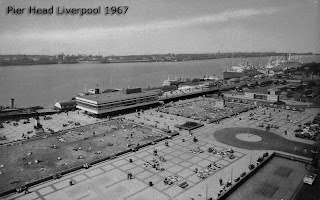 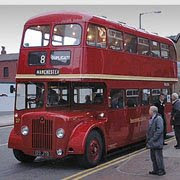 Regimented penguins walked on these ferries.

We would hang from that chrome rail shooting at outlaws.

The Liverpool bus was a wondrous thing. It came in red or green. So simple. The red buses were run by Ribble and came from faraway places such as Blackpool, Ormskirk, Much Hoole, Little Hoole or Preston. I loved the colour, especially on misty days, but the people on them spoke different, and looked different. The men wore tweed and the women wore strange hats, which to a small boy was off-putting.

The Corporation buses on the other hand were green and the people on them spoke like I did, which was all to the good. These Atlantean buses are still remembered with fondness – especially by my brother in law in Australia; but I preferred their precursor. These were also green. You don’t mess about with colour.

The driver was encased in the front and the entrance/exit was at the back of the bus and guarded by a conductor, who stood there all day, when he was not going up and down the bus collecting fares or talking to old ladies.

The beauty of the entry point was that it had no doors. Just a single chrome pole and you could leap on the bus as it was taking off and hang on with your head sticking out into the traffic. What fun we had.

The real beauty of the Liverpool bus was the people on them, talking to their friends, talking to strangers, talking to themselves, talking. I warned Bernadette the very first time she went on a Liverpool bus. Don’t make eye contact unless you want to tell a stranger your life story. She thought I was mad until she was halfway through giving an account of her schooldays to curious old man.

On more than one occasion I’ve heard how a student or stranger to the city, looking for an unfamiliar address has asked the conductor or driver for the nearest bus stop to it, and have found themselves driven to the very front door, the bus and its passengers having gone on a magical mystery tour to get there. It helped if you were young, female, and attractive.

And finally you reached the Pier Head, a place once exciting and vibrant but which is now little more than an antiseptic theme park. Then the buses piled up in their bays right on the water front, like gigantic green pigeons jostling for space.
If you were early, you’d see the Wallesey ferry come in and be treated to another sight, now sadly gone: a ferry its three decks crammed with office workers in pinstripes, some in bowler hats, all carrying umbrellas, earnestly perambulating in a clockwise direction, and stopping only when the ship hit the landing stage with a judder. Seagulls, giant green pigeons and regimental penguins, Liverpool had them all.

“I’ve lost me ticket. I’ve lost it. I’ve lost me ticket!” the boy, about sixteen years old and wearing a pale green jacket, jumped up from his seat, brushing down his bottom, his face torn in anguish. “I hope I haven’t sat on it – It'll have swallowed up.” It was the first time I’d ever seen or heard somebody overtly gay and gloriously funny. I’d heard about it but only in whispers.

In the early sixties if you wore deodorant you were ‘gay’. Somebody in theatre once came to St. Bonaventures. He wanted ‘volunteers’ for a production of Carmen he was putting on in the Philharmonic Hall. We were dragooned into it and did our stuff as soldiers on the stage in the school hall. Rehearsals didn’t go well. The man wore deodorant and talcum and we cringed when he touched us. I never made my debut on the stage, at least not then.

Whispers: the pub in Liverpool where the Beatles’ ‘Sexy Sadie’ worked; we’d heard about him before ever the song was written. Whispers: lesbians – never heard of them until the word came out that Dusty Springfield was one, and that broke a small boy’s heart. Whispers: Mick Jagger was changing his sex.

There was an obnoxious and prurient undergrowth of homophobia feeding on the insecurities of adolescence and designed to entrench the status quo. It took courage then to accept what you were, courage, too for others to accept that they should. Homosexuals were never shown as attractive; films showed then as in some way ‘creepy’, and the whispers soon came out that Dusty bathed her face in onion juice to preserve her skin. I mean, tell me anything better designed than that to quash a boy’s desire!

And despite all the whispers I never saw it coming.

It took place of course on a Liverpool bus.

I was coming home from an evening drinking. A middle-aged man sat next to me and in the way of things we soon began talking. He worked on a farm, and I was the young Trotsky in full inflammatory mode and skin-full of beer. We talked of workers and peasants, and by the time we reached Walton Church his hand was on my knee. We talked of Krondstadt, the Permanent Revolution, and by Warbreck Moor his hand was on my thigh. I was oblivious, convinced he was hanging on my every word. He would have been hanging on something else pretty soon except for the fact that the next stop was mine. The following morning, in replay mode I winced at what I never saw then. But boys grow up and learn that deodorant is good and that gays are both funny and generous and wise.