Choose your friends wisely, Part One. 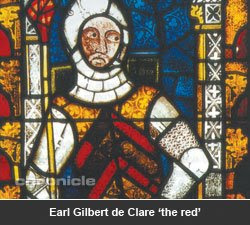 Gilbert de Clare inherited Newport and surrounding lands in a roundabout fashion. They initially belonged to the Countess Isabel, Grand-daughter of William, Earl of Gloucester. She can be excused for marrying King John; choice didn’t really come into it. King John however, despite his unexpected sagacity in granting Liverpool its first Town Charter, was not a woman’s man. He divorced Isabel but kept Newport. (wise choice)

When King John died, Newport along with other land around Gloucester was returned to Isabel, who bequeathed them to a close relative – Richard and, in turn, his son Gilbert de Clare.

Gilbert de Clare had a great way with names, beating Manfred von Richthofen to the title of the ‘Red Baron’. He showed less judgement in his choice of friends, but at least had the sense to change sides when the need arose.

The friend in question was Simon de Montfort who led a serious rebellion against John’s son, Henry III. For a time Simon de Montfort became one of the most powerful men in the realm, beating Henry in battle and imprisoning his son in Hereford castle. It was then he began making plans to take over Gilbert de Clare’s Welsh lands.

Simon was greedy and Gilbert was miffed. He changed sides, joining with Roger Mortimer to rescue the King’s son, the young Prince Edward. From Ludlow they raised forces loyal to the king and drove Simon de Montfort into Gwent where he captured Newport castle. By this time de Montfort was so desperate he was reduced to seeking help from the Welsh.

Llywelyn ap Gruffyd was happy to oblige, taking advantage of English troubles to increase Welsh power. Both men were disappointed. Simon de Montford was forced to retreat across the River Severn. Unfortunately his ships, crossing from Bristol to Usk, were ambushed by the Royal fleet, and de Montford, waiting to be picked up from Goldcliffe beach saw his rescue ships sunk. 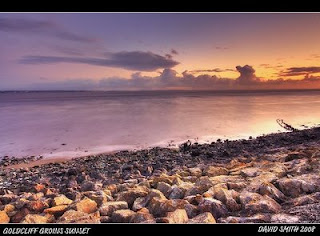 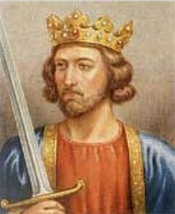 Simon de Montford’s tired, demoralised army were forced to retreat up the river Usk, wade through treacherous marshland, all the time pursued by Prince Edward’s army.


In one final pique of revenge, de Montfort re-captured Newport, burnt its small wooden bridge, seized all of its livestock and destroyed its crops. He left behind fire and starvation in the lands of his old friend Gilbert de Clare, but revenge is sweet. In the battle of Evesham that followed (1265) de Montfort was killed. His body was cut up and different parts sent to the Lords who had accomplished the most. We don’t know who got the testicles, but his head was sent to Roger de Mortimer who gave it as a gift to his wife, Maud. She held a great feast that very night to celebrate and. De Montfort's head was raised in the Great Hall, still attached to the point of the lance.

Meanwhile, Newport, too, got something from de Montfort’s defeat. It may have lost it’s bridge and suffered hardship and starvation, but St. Woolos got its first little stumpy tower from a grateful king.
Posted by Mike Keyton at 07:15