At eight am we were on the road again, destination – the Great Salt Lake. We were told that this lake was second only to the Dead Sea in terms of its salt content. Things like this are good to know when confronted with such an unimpressive sight. It was a grubby, dismal, barren place and the water smelt. I paddled a good half mile into the lake – Keyton's ever-hopeful gene – but the water failed to reach much higher than my knees. Maybe I should be grateful. Much higher and I could have walked out, my cojones dried and salted. I took one final look before boarding the bus. The shoreline swarmed with millions of tiny sand-flies, souls captured by Mormons in their great genealogical quest. 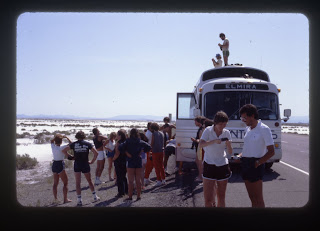 Then on to The Great Salt Desert where we lunched. I hate to use the phrase coming up now. My crit partners would shoot me dead on the spot. But this was awesome, and it was here I momentarily gambled with death. I just wanted to experience utter loneliness, to see what it might be like to get totally and irrevocably lost.

I walked out into the desert.

I walked a good mile, every so often looking back to see the bus, a rapidly diminishing speck. I walked on and on until that speck could barely be seen. And then finally the point was reached where the bus couldn’t be seen at all. Here I kicked a large arrow into the ground, pointing the way back and walked a few paces farther on. Then I spun round like some demented hippy, a dervish on speed, and as suddenly stopped. I looked round, scanning sky, the blistering whiteness and savoured the silence. I stayed until I felt the first trickle of fear and then set about locating my arrow. For a minute or two I panicked, walking faster and faster, wondering where the hell the bus was: And then the welcoming speck, and the promise of bourbon. I’d lived a western dream. 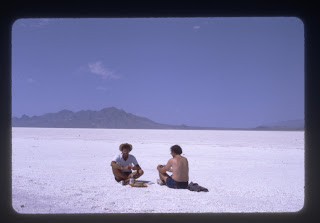 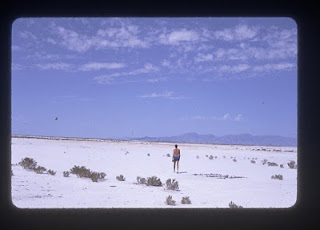 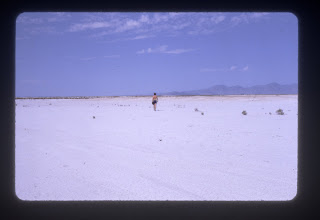 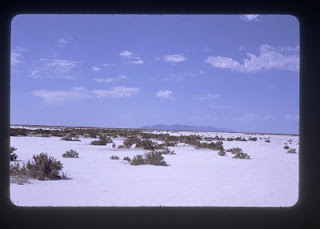 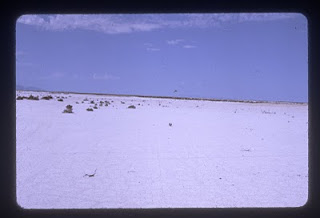 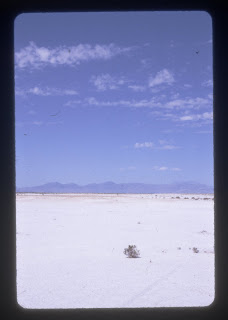 Back on the bus we played cards – Sweaty Betty if I remember – with a slug of bourbon for stakes. We were heading into gambling country.

On crossing the state line into Nevada we were all given a book of vouchers entitling us to free drinks and games in a nearby casino. A most gorgeous, raven haired woman controlled the Black Jack table. She operated without expression like a beautifully efficient automaton. I’d have married her on the spot. Instead I lost dollars on a crap game I never understood. It didn’t matter. It was enough just to watch her face and that little stick of hers moving chips across a long green board.

Wells Campsite was beautiful and lush. Greg, Gary, Roland and myself drove off-site to the nearby town of Wells to buy alcohol for our nightly punch. 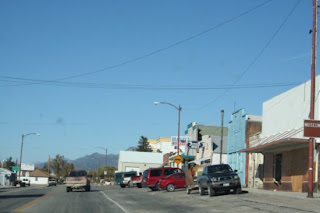 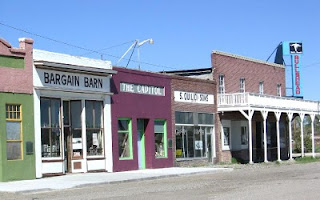 Wells is a crossroads in the desert, the gateway to so much endeavour and tragedy in the old west. Times change. Now there was a whole coach-load of Jewish folk in the liquor store – all from New York. Provisions bought we whiled away an hour in a small casino bar where I drank and Greg, with more experience, gambled. 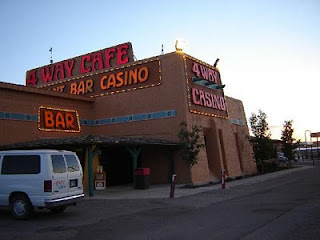 Evidently, your cojones weren't too dried out. I would've never ventured out into the desert (of my own free will). LOL.

The things you do to live out your dream. You're lucky they didn't find your bones out there.

I can imagine wanting to try it though. One dream down, 40 million more to go.

Sometimes it's hard to remember how incorrigibly stupid I was...then I look into a mirror :)

Jimi will be done tomorrow. Working on it.

Hi joe,
thanks for taking a look see

Have Gun, Will Travel! LOL If I ever got to head out into the desert bet would forget all about the arrow pointing back to the bus in the excitement of exploring and that would be all she wrote.....

White sand,blue sky, and you in between. The great salt desert is really something, Jackie

Mike, when I used to read my favorite westerns or watch movies that depicted how "forbidding" and desolate the salt desert is the thought in my mind of course was what a "lonely" place to die! Now that I am looking at things from a different perspective it is also a beautiful place if you have all the modern conveniences like a tour bus to transport you there to visit and then take you back to safety and civilization!

Well not for me Mike, my meds do not allow me to drink alcohol of any type any more... Even if I did not really a Bourbon fan, I like Jack and Coca Cola and a really good Margarita with some Cuervo Gold Tequila in the summer but cannot have either since around 5 years ago... Good thing too because those Ritas are killer good!

A different kind of 'gambling with death' :)

Been following your blog for 3 days now and i should say i am starting to like your post. and now how do i subscribe to your blog?

Thanks, Mike.
I have a widget, available on Blogger, called Google friend connect. It's at the top left of the page. You can just click on it and two basic questions see you through.
Hope it works for you, and thanks again for the comment