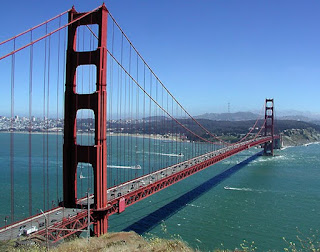 Golden Gate refers to Golden Gate Strait—a name that originated around 1846.
The actual Bridge was completed after more than four years of construction at a cost of $35 million. It was opened on May 28, 1937 at twelve o'clock noon when President Franklin D. Roosevelt pressed a telegraph key in the White House announcing the event. I guess it was part of Roosevelt's huge job creation schemes that helped get America out of the depression. Perhaps they thought bolder in those days.

San Francisco was where many of us were going to say our goodbyes. It was the halfway mark of the tour. I and a few others were carrying on for the second leg, and periodically I pinched myself unable to believe my good fortune.

We left Yosemite late because some serious stocktaking had to be done, and then, at last, the bus rolled off. I might offend many who live in the area but as we approached San Francisco, I found the scenery pleasant but bland: rolling yellow grass hills, a soft blue sky. It reminded me a little of a children’s picture book. Unthreatening. Uninteresting. Hmm…what does that say about me? I find the threatening, interesting? I blame it on my childhood.

The Golden Gate Bridge (The reddish brown gate bridge doesn’t really cut it I guess) came into view, and as we watched it evaporated in mist. In the distance we saw the Hyatt Regency hotel, which resembled something from Babylon or Krypton.

The ‘Team’ treated us all to pizza and beer in an over the top Pizza Parlour and now I’m searching my mind.

What exactly did that mean ‘over the top’? Note to self. Be specific in diaries. You see, somewhere on this trip we went to a place that had ‘One Million Years BC toilets. As you peed, pterodactyls would swoop over you; dinosaurs lower an avuncular head to see whether what you were holding was worth their interest. It was most distracting; certainly enough to inhibit a reasonable flow. But worse, much worse than that - we were essentially doing our business in a tourist attraction. It was the devil’s own job to pretend not to notice crocodile lines of mixed sex tours walking by…and pausing.

But though the memory is clear, my diaries don’t record where it was. Maybe someone out there can help me.

At four pm we hit our hotel, an interesting place, just on the right side of seediness. At six pm we met in the lobby and took a cable car to Fisherman’s Wharf to eat king crab. The mood was sombre, for the crabs especially so. There were people leaving soon that we would never see again. An intense bonding was falling apart. There was only one answer. The obvious one: A drinks party in Gary’s room that over-spilled into the corridor outside. So many group hugs, so little time. 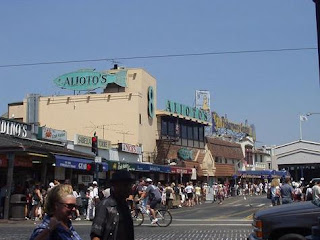 There are some pictures that show it a dark gold in sunlight and of course it's goldish in flood lights at night, but yes, I thought it was a naturally more gold colour as well.