The Duke of Buckingham's legs

Teaching has much in common with writing, though if you change pov in the classroom, you’re likely to get confused, and I don’t recommend speaking in third person past tense - though if the students noticed you’d know you had their attention - before they came to take you away.

However, success in both professions is based on three fundamental rules:

You have to teach or write about what interests you. If you’re bored by something why should anyone else find it interesting?

You need a strong hook to grab them in the first place.

And finally it has to have a degree of importance. This final rule has wriggle room in fiction. Are any of Dan Brown’s novels ‘important’? Perhaps that third rule applies only to ‘literature’ with a capital ‘L’. In Education 'importance' is more immediate and measured by exams, league tables and once upon a time well paid jobs. It also varies from culture to culture. In the west, increasingly, education is as much to ‘entertain’ as it is to impart hard and useful knowledge.

But down from my soapbox. Once I was young. 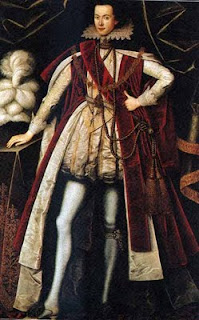 And in my experience, teaching often works best when you’re not aware you’re doing it. I remember entering a classroom with a hangover. We were beginning a new topic - Charles 1st - and the lesson plan made no sense.

I turned the pages of the text book we were then using and fixated on the Duke of Buckingham’s legs. They were long and slender, meant for the catwalk or perhaps to be fondled. Whatever the case they dominated the portrait and it was clear the Duke was inordinately proud of them.

My daemon spoke through me. “I would like you to draw the Duke of Buckingham’s legs.” The class looked at me as though I was mad. But it was an understanding class. They liked me; knew I probably had my reasons, and had a good idea what those reasons might be.

‘Was he really the king’s friend, sir?” Surreptitious nudges followed by closer scrutiny of the offending legs.

“The king’s father was especially fond of him,” I croaked, wondering where the aspirins were when you need them.

‘Maybe he wasn’t gay – maybe he just had good legs.’ Becky was a girl who preferred the less obvious path.

“Could you be done for it then, sir?”

They were hooked and it took little prompting for them to research the man with the legs, his relationship with the king, and laws against sodomy which Becky thought were gross.

So out of the three rules it is rules one and two that are paramount, though that is not to imply I found the Duke of Buckingham’s legs of untoward interest.
Posted by Mike Keyton at 12:44

I think the key to being a good teacher (and writer) is being able to resonate with the student (or reader).

When it's something that intrigues or arouses empathy, half the battle is won.

Ref 'resonate' - The best advice I was ever given was 'Sell yourself and you sell your subject.' I suspect the principle is universally applicable. Mind you, for chronically shy people that can be a big 'ask'. You build a shell.