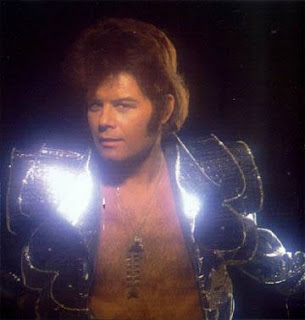 Justice is beautiful, says Socrates to a poor, befuddled Polus in the Gorgias though I prefer the more ambiguous, double-edged fable that Justice is blind. And there’s the miracle because justice is both blind and selective. The sins of some become elevated to cultural taboos.

Who now will happily admit that they like Gary Glitter – not the man (Paul Francis Gadd) but the artist and music of thirty or more years ago? We’re talking high heels and glitter suits here, over the top hair and cheesy anthemic songs that evoke a time and place. Immense fun and tongue in cheek bubblegum. And yet it has somewhere been decided that to like Gary Glitter somehow suggests you also like molesting children. On this criterion one should also despise the works of Socrates, Alcibiades, Roman Polanksi, Jerry Lee Lewis, and Chuck Berry. But the question arises as to whether a more sinister justice is at work, sinister because it is unaccountable. Quietly and without judge or jury, self appointed arbiters of what’s good for the public, have removed from British play-lists, so in effect he is being punished twice in terms of royalties and revenue from work that bears no relation to his crime. This particular punishment also effects his band.
You may decide it’s what he deserves, but it wasn’t part of the sentence passed down on him. Moreover, removing him from the playlist of the state broadcaster is reminiscent of Stalin's erasure of 'enemies of the state' from the public record. Not that I'm comparing Glitter to Trotsky.

If it were ever discovered that Bob Dylan had committed similar, heinous crimes would his oeuvre be omitted from BBC play-lists? If not, are we suggesting that Justice is dependent on the perceived value of one set of songs over another ‘Tangled up in Blue’ Vs ‘I'm the Leader of the Gang( I am)? 'Great Balls of Fire' Vs 'Rock and Roll, Parts One and Two' Polanski's 'China Town' Vs 'I Love You Love me Love'?


It’s an interesting game. Which artists do you think would transcend any crime because of their cultural significance - Phil Specktor? And who would get the Gary Glitter treatment because their music is seen as dispensable? And is this even handed justice?
Posted by Mike Keyton at 08:19

My retinas! They burn.

As for justice, I only feel sorry for his band.

Gary Glitter didn't make it to the states--I'm sure I would've remembered the shiny suit.

The last flare up we had was with the Dixie Chicks. After they started running their mouths off about President Bush at a concert in the UK, they came home to a less than welcome reception. Radio stations all over Texas started banning their songs. Even I turned the channel if a rogue station defied the majority and played them anyway.

It was totally disrespectful and arrogant on their part. No country station (that I'm aware of) plays them anymore. I think they crossed over to other genres. But since I never hear them, they're invisble.

It's a shame because they're talented. And stupid for thinking fans are going to follow them blindly.

It's a difficult situation, Maria, but my bottom line is that media outlets shouldn't make decisions for us. If you don't like the Dixie Chicks, then you have the power to change stations rather than the station making that decision for you.

With regard to Gary Glitter what he did was reprehensible and he was punished for it - more severely than some - but again, ref media outlets, I resent other's second guessing the courts and making decisions for me. I can separate the 'artist' from the 'villain.' The time before, and the time after.