Macbeth in a storm 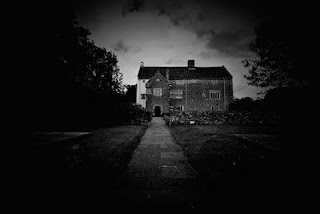 In 2001 we saw an open air production of Macbeth in the grounds of Llancaiach FawrManor. It starred Abigail Hopkins, the daughter of the more well known Anthony. It also rained. Not just ordinary rain. Wales doesn’t do equatorial. Not often. Fate – I pictured her as a malevolent Welsh woman with a watery grin - waited for us to choose our seats, open our sandwiches and then without warning covered us with the Atlantic and some of the Pacific.

It poured down, turning cheese sandwiches into a cold fondue, and here is where a weird, British perversity kicked in. We tightened our hoods, unfurled our umbrellas and raised our feet as the ground turned to mud and pools grew into lakes. As the performance went on, our chairs slowly sank into the morass, but still we remained…and, equally weird, so did the actors in a strange, symbiotic relationship: as long as an audience remained, they would perform, and for as long as they performed we would remain. Besides, they’d probably factored in the curse of the play that must not be named.

And maybe they were enjoying skidding across a greasy stage and sometimes coming off. Abigail Hopkins surely did. As Hecate she with the other witches were perched up a metallic tree, silhouetted against a lowering sky when suddenly lightning flashed and thunder rolled. This was SFX with attitude and I’ve never seen witches so terrifying, or terrified. Alas, all good things come to an end, our applause muted in rain.

But a decision was made. Our next holiday would be taken in sunshine. Be careful what you wish for. Be very careful:)
Posted by Mike Keyton at 03:15

That must have been one heck of a play to stay through a storm.

The play had nothing to do with it! We'd paid for our tickets!

You and the rest of the audience were really brave! I would have left (don't care who or what).
Weather is unpredictable no matter where you are. I guess Mother Nature had the last laugh. ;)

Not brave, Claudia; bloody-minded. And I confess, one us weakened. My four year old daughter and her friend retreated to the car where they squinted at the play through rain-blurred windows. It's done her no harm. She's now doing French at UCL and is making some inroads into Acting - I reckon it was the Macbeth experience :)

very vivid description-felt like I was there and kind of wished I was...something in my welsh nature likes the perversity of it all.

Perversity is much under-rated :)A celtic blessing, or curse