Send in the Penguins 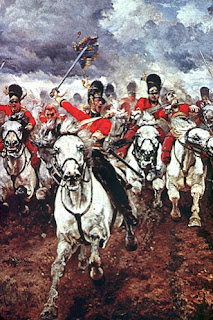 The Romans were supreme pragmatists, expert at ‘borrowing’ the best military tactics and weaponry from those they conquered. The British, too, are noted pragmatists, operating on the maxim of ‘If it ain’t broke don’t fix it.’ As the British Empire reached its peak so, too, did the eccentricity of its top Generals, their ability to recognise what was broke, or indeed a dead parrot, floundering in complacency.
The Boer war proved something of a shock, our eventual victory a close run thing, and immediately afterwards the Elgin Committee was established to explore what had gone wrong.

Some pushed for the abolition of the sword and lance as viable weapons for cavalry. Sir Ian Hamilton argued that ‘compared to a modern rifle the sword or lance can only be compared to a medieval toy.’

Leading generals were not impressed and continued to champion the use of lance and sword as cavalry weapons of choice.

General French and General Douglas Haig – key figures in World War I – were the most vociferous against reform, arguing the virtues of slashing and stabbing; the shock of the charge. 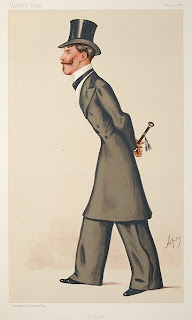 General Brabazon went one step further – the tomahawk. He argued that the power and momentum of a cavalry charge - with men swinging tomahawks - would sweep all before it. It had, he argued, proved highly effective on the Afghan frontier – which is clearly where we’re going wrong now.

Lord Esher, a man of dry wit, recorded Brabazon’s appearance at the commission:

‘He drew graphic pictures of a cavalry charge under these conditions, so paralysing to the imagination of the Commissioners that they wholly failed to extricate the General or themselves from the discussion of this engrossing subject.’ 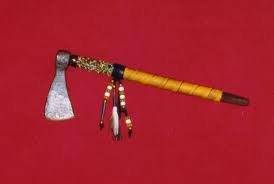 It was an interesting position to take because the Boer war had clearly demonstrated the devastating effect of artillery and long range rifles. Generals with their powerful, aristocratic connections, however, carried some clout.

The Elgin Commission did what the British always do in such circumstances.

The cavalry would be allowed to keep their swords but, much to the disgust of traditionalists, they would carry rifles as well, and learn how to dismount and fire.

I love eccentricity and so, clearly, did General Brabazon* but was the tomahawk any more eccentric than the lance – a nine foot bamboo cane, tipped and reinforced with steel?

The British tomahawk would have been made from English oak, steel from Coalbrookdale, and decorated with pigeon feathers, perhaps coloured. They’d have made a pretty sight charging against machine guns. It could have been worse. We could have had Generals arguing for blow-pipes.

We could of course have sent in the penguins. 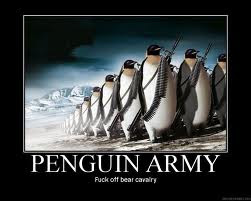 *Ordered to shave off his beard, the younger Brabazon also shaved off one half of a large and luxuriant moustache, startling observers on the regimental parade ground.
Posted by Mike Keyton at 02:20

You'd think the casualties would be enough to persuade them to go to rifles.

This absolutely defies common sense. Thanks for the history lesson.

History often does defy commonsense. So do historians

This is very interesting.
I didn't know someone had proposed to use a tomahawk against rifles and machine guns. That does sound ridiculous and absolutely devoid of common sense. Unless both parties at war drop their guns and fight like real men, making the whole thing more fair. But there would still be someone with a gun tucked somewhere on himself anyway.

Its amazing how generals would throw men into open fire. The Civil War, WWi, and WWII all witnessed generals who threw there men in large numbers out onto the field with hopes of overwhelming the enemy. The machine gun must have terrified those men of WWI.

Jay, my definition of fairness would be if leaders went to war. At least in the past Kings fought their own battles. It would have made for a nice corporative sponsorsed event if Bush and Saddam had got into a ring together - or played paintball with real guns

Stephen, as they said, 'Lions led by donkeys'. The thing is, perhaps, whether the pendulum hasn't swung too far the other way. Would we have defeated Hitler or Japan if the media played the role it does today?

As Maria said, it simply defies commonsense. It's frightening to think of grown men having a debate about the effectiveness of the lance versus the rifle.

An interesting post. (I thought we were going to discuss chocolate biscuits. How shallow am I? :))