God has a sense of humour 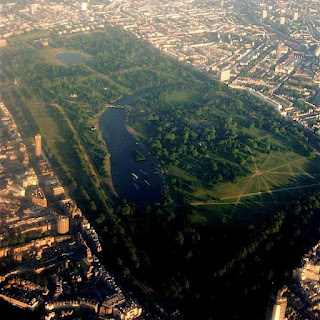 “Aliiii…Aliii…”
At first we thought it a seagull. The voice was high. “Aliii…” a piercing shriek that cut the air.

A small woman in pink - rucksack bouncing on her back - raced along a nearby path, looking wildly about.
“Aliii…Aliii….”

She was terrified, desperate; in her cry a fatal acceptance - she could do nothing else but run from path to path to path, calling her little boy’s name. And that is what she would do until darkness fell and the park closed.

I said a quick, and as I supposed, a futile prayer for her as we rose to our feet.

“We might see him on our way,” said my daughter. “Look out for a small boy.”

“We’re only going to the toilet,” I said, “but yes, we’ll keep our eyes peeled.”

I had barely unzipped my jeans when half of Bagdhad – women all screaming - invaded the toilet. They were dragging a harassed-looking attendant. More women pushed in and my bladder miraculously dried. I held my ground, giving it one more chance.

“Aliii...” screamed another. (Not the woman in pink)

And then another, smaller but equally desperate voice:

“Smash the door down!”

“I’m on the toilet,” Ali sounded terrified. To be on the toilet surrounded by these door-smashing maenads. I knew how he felt. I was terrified too, wondered if there was another toilet close by.

He should be so lucky.

“Smash the door!” This was one little boy who would never go to the toilet again without first telling his mother and probably not do so even after he was married.

God, though, had listened to my prayer; perhaps not in the way I intended.
Posted by Mike Keyton at 03:51

Meanie! I hate when you leave me hanging.

Can't have that, Maria.

I told Frances and the two of us watched from a safe distance as the small boy got the mother of all telling-offs. As Clay Cross might say, 'that boy would never lift his eyes from the ground again'

At least now I can do my yoga without worrying what happened next.

Much as it seems extreme--this from a woman who searched 12 hours for her dog, I can understand.

Have you ever lost one of your children?

Ahhh the joys of people watching; leads to many inspired tales...:)

Maria, joking apart my heart went out to her. I was just celebrating the surreal outcome. Enjoy the yoga. I'll remember in future you don't like 'hanging'.

Jeeze. My kids have done that to me. Just take off because nature calls. Mind you, like Ali, they only did it once.

Mind you, like Ali, they only did it once. I bet!

I lost one of my boys in a shopping mall when he was three. The little stinker was hiding in the clothing racks then actually lost me as I was frantically hunting for him. I'd like to say I gave him a good talking to but we were both so scared I only remember a lot of hugging. And maybe a few tears.

There's only one answer, LD. Chip them!

LOL! What a nice anecdote, Mike! I had a mental picture of this scene (don't worry, it was specifically just about the kid behind the stall and the "door-smashing maenads") LOL!

Thanks for the chuckle, Mike. 'Door-smashing maenads' is a wonderful turn of phrase. It's amazing how easily the bladder is frightened into submission.

Poor Ali! Good gosh, I understand that losing your child in the park can scare you sh*tless, but if you hear him on the other side of the door, let the poor little man finish the job...

What a great story. Poor Ali, mentally scarred for life. :)
I never managed to lose my daughter (I didn't try too hard) but I've spent hours looking for dogs that have wandered off and I know how nightmarish that is.

I had a mental picture of this scene (don't worry... Why should I worry, Claudia? Over half a dozen women had more than a mental picture : ) Glad you liked the 'door smashing maenads.' They really were.

Adam, I'm glad it made you chuckle. It made me chuckle after I was safe out of that toilet. And you're right. The male bladder has a mind of it's own. At least mine has, and it's not very bright.

Let the poor man finish the job Exactly, Vero. The cry of the male everywhere!

Hahaha yes that is God having a sense of humour. Poor kid, though. :-D

It turned into a fun story - quite luckily. But the damn, think of the trauma!

Oh my god! that kid is scarred for life! talk about toilet training issues! but glad this story had a funny (sort of) ending.