Was there something in the water? 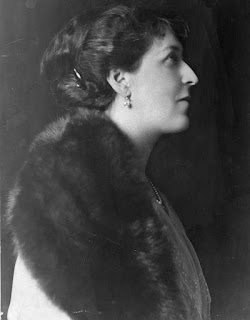 On arriving at Tredegar House, guests would be given a small gift: a handmade bird’s nest. She was practising. Before very long she had made a very large bird’s nest for herself – complete with eggs. There she sat brooding and communing with her avian sisters…perhaps dreaming of a male kingfisher.

It perhaps explains the general demeanour of her son, along with his interest in parrots.
Virginia Woolf once described Evan as: ‘a little red absurdity, with a beak of a nose, no chin, and with the general likeness of a callow but student bantam cock that has run to legs and neck.’
Gore Vidal, too, described Evan as: ‘A birdlike sort of man. Possibly because of his mother; the dowager Lady Tredegar, built the biggest bird’s nest in all world. She apparently hatched nothing in it except – who knows – Evan?’

Despite her title, Lady Tredegar seemed to have little love for Tredegar House, preferring instead her refuge, Honeywood House in West Sussex. What it is to have choice. 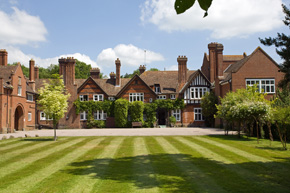 Tredegar may have held bad memories; she may have found Courtney, her husband, a bore or may have just disliked the Welsh; whatever the case she died in 1949 (the same year as her son Evan) with the explicit instruction that her ashes were never to be taken to Wales.

Eccentricity has its charms but the Morgan family had one little secret it tried to manage and suppress. Evan Morgan had a sister: the honourable Gwyneth Ericka Morgan, a high spirited society beauty with a mutinous soul.

Gwyneth craved adventure and lived a ‘bohemian’ life. She loved dangerous people, alcohol and drugs. Her family, concerned and appalled in varying degrees, tried desperately to rein her in – and at last succeeded.  Frail and in ill health her final years saw her a virtual prisoner, moving from one guarded house to another and receiving medical care from leading physicians. She vanished in December 1924, her body later pulled from the Thames in May the following year. 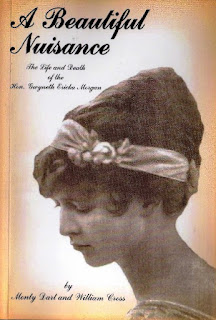 The official line is that she overdosed in a London opium den, her body dumped in the Thames. A turquoise amulet was found on her corpse, a present from her brother Evan, complete with wire from a ginger-beer bottle that held it together.

Her father, Lord Tredegar tried all in his power to get an open verdict on her death, ‘Suicide’ being unthinkable, and she was quietly buried in London. Only after her brother succeeded to the title was her body (unlike her mother's ashes)  brought back to Wales and buried in Bassaleg churchyard.

Mystery surrounds the death of Gwyneth Morgan, not least how one so frail could have so easily escaped and avoided recapture, and there have long been rumours of something more sinister It’s a mystery subtly explored in a  fine book  - ‘The Beautiful Nuisance’ by William Cross and Monty Dart. A rather less subtle explanation is provided by an anonymous 'shouty' comment in Paul Busby’s blog:

GWYNNETH MORGAN DID NOT DIE DUE TO ILLEGAL DRUGS. SHE DIED BECAUSE THE FAMILY PRACTICED A STYLE OF MONARCH MIND CONTROL AND GWYNNETH WAS A SLAVE, HER BROTHER WAS HER MASTER, AND THE FAMILY KNEW HER TORTURE-INDUCED MULTIPLE PERSONALITY DISORDER WAS BREAKING DOWN, AND SHE WAS REMEMBERING THE ABUSE. Evan Morgan and Aleister Crowley created the Hitler we knew, and WWII went down the way it did because of this.

Clearly eccentricity attracts…eccentricity. Then again, who knows? The whole thing is just begging for a Francis Cottam novel.

I remember hearing a story about a noblewoman and a large nest. Your post helped me connect the dots.

Makes me glad I come from a relatively boring family.

Wait...
So this woman made a bird's nest big enough for her to sit in? Really?
I'm wondering if my early life at the bottom of the financial totem pole wasn't so bad given most of the people I knew then were sane lol!!!
I haven't risen far from my humble beginnings but notice that the people a lot farther up than me have the oddest...tendencies.

But whose eggs was she hatching?

Boring family...? Didn't you keep giant ostriches? Aren't you now an enthusiastic chicken farmer, building coops left right and center. Katharine Carnegie is alive and well and living in Texas! Seriously, there is evidence that much of Katharine's eccentricity has been exaggerated by her son, Evan, and that her making of small bird nests to give to guests was therapy for severe arthritus. I have just received an email from Will Cross, along with a fabulous picture of Lady Katharine herself which I have just added. It defends Katharine, but makes Evan even more of a cad:

'Here are some images from that day to I hope raise your affections for a much misunderstood woman. Also an enchanting picture of the lady herself, with her tremendous conk, which does earn mention in passing of its avian look but in all probability the bird woman description and sitting in nests ( one big enough to lay Evan) was in first created for mischief by Evan during WW1 whilst wearily wearing away the war at Garsington Manor while his fellow Welshmen were being slaughtered in the trenches.' Many thanks, Will - and for those who like this period 'A Beautiful Nuisance' is well worth the read.

Angela, as Scott Fitzgerald said: 'The rich are different to us' - or words to that effect. Mind you, I'd welcome a bit of that 'difference'

Ah this is really so interesting. I really enjoyed reading about this family. Gives my mind lots of fodder for future story ideas. :-D

History is fascinating, Misha, sifting fact from fiction, highlighting this, omitting that. Life, past and present provides unlimited fodder. You are completely right

With the greatest respect to your fine blog, the comments of Will Cross should be treated with the utmost suspicion. The stories re. Katherine were not created by Evan, and there exist several letters from observers that report seeing her make nests at the conclusion of a meal. As to the assertion that these stories were "created for mischief by Evan during WW1 whilst wearily wearing away the war at Garsington Manor while his fellow Welshmen were being slaughtered in the trenches." this is a gross misrepresentation of the truth.

Evan suffered from tuberculosis, and was in and out of medical institutions his entire life. He was determined to fight in WW1, but was turned down repeatedly because of ill-health, and finally his mother pulled strings and got him a position in The Ministry of Works, where he was personal private secretary to the Minister, Walter Monckton.

I take issue with your assertion that his book is "well worth the read"; it reads neither well as fact or fiction, the latter being the majority of the content. It is one of the worst examples of "cut & paste" vanity publishing, with little literary or historical merit. There is scant evidence of either editing or critical judgement, and sensationalist garbage is purveyed as historically backed supposition. There are no sources referenced throughout, and certainly no access to primary sources.

This book is a monument to the authors' self-inflated ego. Take, for example, the description of the "discovery" of Gwyneth's grave. One would imagine that they had hacked their way through the undergrowth a la Indiana Jones; anyone in Newport could tell you that you discover Gwyneth's grave by walking around the side of the church! If the grave was a little worse for wear it was because her entire family had been extinct for nearly fifty years.

Please - save your money, and do not pander to this man's scarcely grammatical self importance.

Anon, many thanks for your input. I never realised Evan Morgan would still have the power to fuel controversy so many years after his death. I should have done. History arouses the strongest of passions, and much is learned from fierce argument

It seems unlikely that Katharine Morgan was any kind of decent mother. She raised a son (Evan) who was a notorious predatory homosexual and pedophile (seducing boys in Algiers) and a daughter who became an opium abuser.