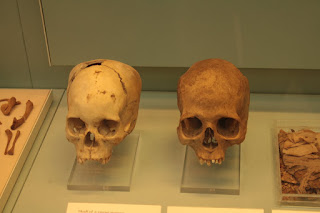 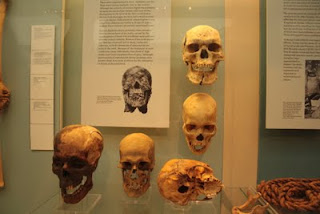 *With gratitude to http://minascience.blogspot.co.uk/2011/04/london-calling-british-museum.html
I had no camera that day.
Posted by Mike Keyton at 04:28

Do you ever wonder if the former owners of the remains on display in museums object to the invasion of their skeletal privacy?

Well, their naughty bits have gone. Anyway, they were staring at me!

Since I plan to be cremated, all anyone in C66 will see is the back of my ash. :)

I always wonder about their stories, more so the unknown skeletons than the celebrity skeletons.

Maria, I quite fancy a natural low-tech burial in a small wood. There are a growing number of such woods in Britain. A tree is nicer than a tombstone.

Oh, I won't have that problem.
I have to confess that seeing the skulls and reading, as a paragraph opener, something like "we'd packed off our beautiful daughter to Lyon", well, I was phone in hand ready to call Scotland Yard. Then I read British Museum, and everything's alright.

What a twisted mind you have, Jay : )

Thank you, Mina, and thank you for the two photos. I tried to comment on your recent post on Scotland, but being a very poor linguist - unlike you - couldn't work out where the comment box was : (

Skulls are fascinating. I remember as a kid when I saw one I'd try to move the jaw and talk for it. Usually these were props though. But fun nonetheless.

I work in reverse from you, trying to imagine what the faces looked like when the people were alive.

I love those computer simulations based on forensic modelling - but each time my less capable mind tries this, I come up with a different result : )My skulls sometimes change sex, but they never complain.