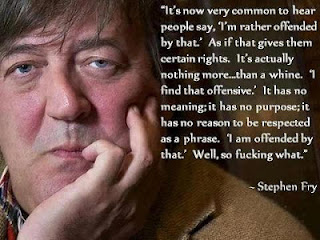 I would qualify that. Offence is in the eye of the beholder. The Rack is not malicious and things should have been sorted out in a more mature manner.
Posted by Mike Keyton at 02:03

Mike, I'm so sorry that this all was targeted at you of all people, because you don't deserve (or need) any of this bullshit. It was malicious and immature and just plain mental of her to post what she did. The Rack is not at all offensive, and just so you know, I've had several authors and readers tell me it's their favorite part of the site, because of Clay and Sherie. PS: Love that Stephen Frey quote.

Thanks, Renee. It's an interesting experience, not all together pleasant but the world turns. Thanks for the heads-up about those authors and readers. Sheri is polishing her nails with added gusto.

Good. I'd hate to see her go into hiding...not that that's her style anyway.

Clay would be bereft!

Um...if I did not fully comprehend the title of this blog as "Record of a baffled spirit", then I do now.

Perhaps it is because I've enjoyed, loved and adored Clay and Sheri doing their thing before that I am utterly baffled by what has transpired. This person, bless her soul, must be on some uber-sensitive stuff that I do not want to get my hands on.

Mike, at no point have I been offended by Clay and Sheri and I personally apologize that you've been seized into this hubbub.

Angela, thanks. That's really nice of you, and why should you apologise? You have excellent taste. Youl like Clay and Sheri lamour : ) Anyway, lets hope it's all over.

This whole thing is typical of the barracudas and trolls looking for a straw man to burn just to prove they are more enlightened. And then to have the temerity to recommend violence? That crosses the line no matter who you are.

I am truly sorry this has descended to juvenile mud slinging. Sadder still that the vigilantes react rather than examine. If anything it proves you are far nobler than the mob for not getting involved.

Thanks, Maria. I suppose I am involved in terms of writing this post but I just wanted to balance things with my point of view. To do otherwise would have been not so much cowardly as silly. But there it stands. Lid down and toilet flushed. Thanks again, Maria

It is all taste.

Sorry this happened to you, Mike. Hang in there.

You have nothing to blame yourself for, Mike.

It's a shock to find out you've hurt someone, especially if your intent was to entertain. But that hurt is not your responsibility.

When you say something in a context that is already established by precedent, it must be interpreted in that context, and all other interpretations and hurt feelings that happen outside of that context are not within your sphere of influence and are always caused by the internal context of the interpreter. And you can't possibly be held responsible for the inner landscapes of other people.

Or, in other words, you did the right thing. Don't blame yourself of anything for even a second. You'd be wronging yourself if you did. :)

Thanks Kerri, I think it's over now

And it takes all sorts

Thanks, Vero. Reading that second paragraph made me feel right intelligent. I feel quite invigorated : )