Deceit is the way to go 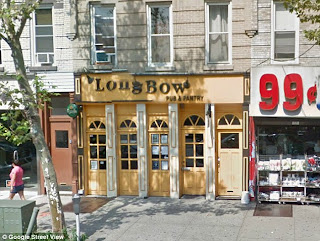 The Longbow Puband Pantry, in Bay Ridge, Brooklyn is a British themed pub selling Old Speckled Hen, Fish and Chips, and has a Welsh national rugby shirt over the bar. It shows live British football matches and is owned by Michael Cobert, a former native of Wrexham in North Wales.

His biggest mistake? A certain reckless honesty. He advertised for a bartender asking for an ‘energetic and enthusiastic’ man or woman ‘with an appreciation of craft beer, good food, whisky and real football….Being British definitely works in your favour.” I would have thought that amounted to common sense rather than active discrimination. The New York City Commission on Human Rights thought otherwise. It accused the bar of violating discrimination law ‘by giving a preference to employing applicants based on their national origin.” The commission offered to settle the matter for $2,500 warning that should the Colberts dispute the issue the fine would rise to $7,500.

The Colberts are disputing the case. They point out that one of their employees comes from Long Island but earned a Hospitality Degree whilst working in London. The Colberts argue they are catering for a specialized market, a clientele for which: “It is essential to know that Wales is not where the Princess is from, why Everton v. Liverpool is an important match, that ‘knocking someone up’ is not about being pregnant, a banger has nothing to do with gangs, black pudding is not a dessert and that the Old Firm has nothing to do with attorneys.” (NYT)

It will be interesting to see how the case goes, but it seems to me that this is another case of bureaucracies choosing soft targets and/or soliciting administrative costs. Bear in mind they’ve targeted a low wage transient sector in the job market. Now look to the other extreme.

Another report in the New York Times examined the 13%  unemployment rate of  African-Americans and suggests not racial discrimination but ‘favoritism’ or ‘inclusion’ as the primary cause of this. Discrimination or ‘exclusion’ is subject to the same legal challenge that the Colberts now face. ‘Favoritism’ or networking gets round this. Family and friends, personal networks and insider information are the new mechanisms of employment. And we’re talking about high end employment.

The report argues you don’t need ‘favoritism’ or a strong social network to find a low wage job at fast food outlets or chain stores, so anti discriminatory legislation ironically makes it easier for African Americans to find low paid jobs in these sectors. It levels an already low playing field. On the other hand the more insidious - “whites helping other whites is not the same as discrimination, and it is not illegal.” The report discovered that higher paid jobs are more usually reserved for ‘people like us’ and people who know about them will tell the people who are close to them or with whom they identify and who might in the future reciprocate the favour. Thus dynasties are born, acting dynasties, media dynasties, political dynasties. You don’t get dynasties in fast food outlets.

That is where the Colberts went wrong. They advertised with a hint based on common sense and pragmatism for a relatively low paid job. I hope they’ve learnt their lesson. Deceit is the way to go.
Posted by Mike Keyton at 04:50

NYC has been a political loony bin since Rudy moved on. There's no hope for sanity to prevail in an environment of leftist political correctness. Honesty is dead and racial pride is encouraged in everyone but European types.

Hi Crash. I'm an enemy of political correctness when it offends common sense. This is the brunt of my argument.

The secondary argument is the element of complacency, even cowardice in substituting relatively meaningless targets for equality in low paid jobs, whilst turning the other way when it comes to the professions.

Ref racial pride. my motto is be happy in your own skin

Didn't you read the obit? Common sense passed away years ago. Seriously. And it's ghost is never seen in government halls.

Passed away, eh. Then I guess we wait for the Second Coming.

This is a must see. Google the term "CRAZY RICH CASH" and go to the top site. Once you get there, click on their PENNY STOCKS page to see what the rich are trying to keep for themselves. It is the easiest money to be made in the market!

Hi Mike .. it is a crazy life isn't it - where are Mr and Mrs Common Sense ... good for them for having the gumph to engage in a dispute - I sure hope they win.

Hypocrisy at its shiniest. The only ones who win are the lawyers.

Hilary, Mrs and Mrs Common Sense are on life support. Prognosis not good.

Hypocrisy at its shiniest. That's a lovely way of putting it, Maria.

Hi Mike,
Thank you for stopping by my blog. I've neglected it a bit because I'm swamped with work and I was also travelling. Whenever I find some time (or remember that I have a blog), I post something.
Once again, thanks for dropping by :)
Cheers!

It's always a pleasure, Claudia