The man that hated Britain: the headline is arresting as tabloid headlines should be. It encapsulates an aspect of truth, which, in a free press will be ideologically one-sided. For those who don’t live in Britain the article refers to the late Ralph Miliband, the Marxist ideologue  and father of Ed Miliband, a possible future Prime Minister.

It might have been a more accurate headline if it had declared ‘The man who hated the Britain that was’. And he did hate, or if you will, dislike, the Anglican Church, the Monarchy, the armed forces, Parliamentary Democracy and the ‘rabid nationalism’ of the people at large. As a Marxist and internationalist he’d have been a rum cove if he didn’t preach that ‘the workers have no country.’ Ralph Miliband probably did hate what ‘was’. He also loved an abstract alternative.

He wanted to replace ‘the Britain that was’ with ‘a country that could be’. And there’s nothing wrong with that you might say. Who would want to live in the Middle Ages? Social structures come and go, each carrying the seeds of their own destruction. Contradictions become unbearable and change when it comes is invariably violent.
And therein lies a problem.

Change is effected by intellectuals who profess to know what the people want – or at least what is good for them if only they knew it. There’s no getting away from this, Cromwell, Robespierre, Lenin, Mao, they knew ‘what was what’ and imposed their vision on societies in turmoil.  It’s how things work, and at least such men (maybe not Mao) accepted the moral consequences of their actions.

So what about British Marxists – even - Fabians in the interwar years?

Between 1928 and 1932 seven million people died in Stalin’s Russia as the result of an engineered famine designed to drive peasants into the new collective farms. Beatrice and Sidney Webb (founders of the London School of Economics) concluded:  ‘Strong must have been the faith and resolute the will of the men who, in the interest of what seemed to them the public good, could take so momentous a decision.’ So that’s all right then. It was for their own good.

The late Eric Hobsbawm, another Marxist academic, refused to condemn Stalinism’s 30 million dead, or the Soviet invasion of Hungary. When asked whether if:  ‘the radiant tomorrow’ had actually been created in the Soviet Union, the deaths of 15 or 20 million people would have been justified, he replied: ‘Yes.’  I think it was Stalin who said, ‘you don’t make an omelette without breaking a few eggs.’

Hobsbawm and Ralph Miliband were close friends though the latter never went as far as to support the excesses of Stalinism. My point is that the Webbs were opinionated fools, whilst Eric Hobsbawm was at least morally consistent. He believed the ends justified the means and accepted the moral consequences of his ideological beliefs.

And that’s my point. Once you adhere to a belief system you shouldn’t attempt to shrug off the moral consequences. A Nazi however far removed from the death camps bears a degree of responsibility. Similarly a Marxist accepts that revolution is violent, whether you’re talking about Trotsky’s suppression of the Kronstadt rebellion, or the later Gulags. Revolution involves killing, and Marxist academics who lead comfortable lives are either open about it like Hobsbawm – or attempt to look the other way and refine the abstraction. In both cases these are men who hate their country if by country you mean the status quo.

I’ve touched upon relative giants. Now on to pigmies.

No doubt the children of Maggie Thatcher felt similar grief when confronted with this puerile petit bourgeois nonsense. But they took it on the chin and remained silent 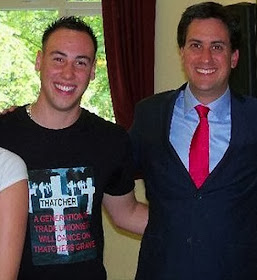 The same Ed Miliband declares…The Daily Mail sometimes claims it stands for the best of British values of decency. But something has really gone wrong when it attacks the family of a politician — any politician — in this way

In fact the brunt of the ‘attack’ was on the father’s belief system, and yes, it was a deliberate, smear in what will be a very dirty battle between now and the next election. Now it is Ed Miliband bringing his ‘dad’ into the fray. There is anger and hurt, no doubt. There is also calculation in how to win the sympathy card. In foot-balling terms Milliband is taking a calculated dive – calculating, too, in how to destroy a dangerous opponent. First News International, now the Daily Mail. Press regulation is gathering steam.

And where do I stand in all this? I prefer a free press with all its faults. I would rather newspapers make mistakes than not be allowed to make them.  My nightmare would be a monopoly BBC or a monopoly Daily Mail. Regulate boxing, yes but blogs and newspapers should be opinionated and ‘bare knuckled’ - the bloodier the better. A Marxist will tell you that the primary aim of a legal system and police force is to protect property and in consequence the ruling class because they have most to lose. In a similar way Press Regulation is meant to protect the Establishment, cynically using victims of the press as pawns.
Mike Keyton at 02:52