Who's in charge of thought control? 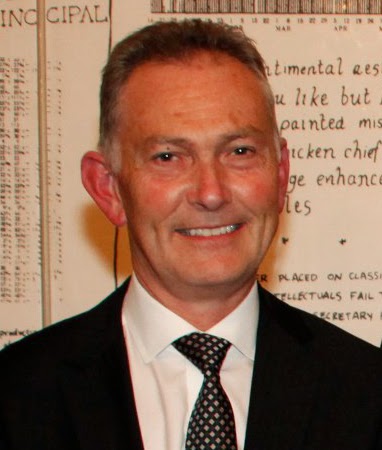 Richard Scudamore sent some crude and sexist emails to a long standing friend. Here are some of them, and they don’t make pleasant reading. In this private email he warned his friend to keep a woman colleague nicknamed Edna ‘off your shaft.’

Another email tells of a former girlfriend ‘…called double decker…happy for you to play upstairs, but her Dad got angry if you went below. And finally, just to give you a sample he forwarded an old sexist joke: “Once upon a time a Prince asked a ­beautiful Princess, “Will you marry me?” The ­Princess said, “No!” And the Prince lived happily ever after and rode motorcycles and banged skinny big t****d broads...”

Unfortunately for him copies were automatically sent to his PA whose job it was to arrange his diary. It is unclear as to whether she had to read these emails, but read them she did. She was shocked. So much so, she sold them to a national newspaper, which no doubt assuaged her feelings.
As a result one leading officer for Women’s and Girls’ football claimed these comments might ‘put women off football’ and demanded disciplinary action. She added “The people at the top of the Premier League should be sending down the right message to all levels of football.”

Another spokesman is quoted as saying:

“Every employing organisation should have a disciplinary code covering staff conduct, and follow due process at all times when there is an allegation of sexist behaviour.”
Shadow Equalities Minister Gloria de Piero declares: ‘It is time to kick sexism out of football.’
And who on earth would disagree with the statement by Women in Sport that: "Sexism, as with racism and homophobia, is not acceptable in the workplace.”?

But are these charges applicable?

Scudamore, to my knowledge, has never publically indulged in sexist behaviour that would discourage women from football. You could argue the culprit in this respect is the PA and the newspaper that made money from four or five private emails.

In Scudamore’s words: "They were received from and sent to my private and confidential email address, which a temporary employee who was with the organisation for only a matter of weeks, should not have accessed and was under no instruction to do so. "Nonetheless I accept the contents are inappropriate and apologise for any offence caused, particularly to this person." The question is whether the PA who made money from this will also apologise.

The former Culture Secretary, Tessa Jowell would argue the reverse. For her Scudamore is the villain of the piece:
a)‘You can’t have one position publically and then be laughing privately.’
b) In the world of social media and email, there is no public and private.
And, in a quite sinister, almost North Korean statement:
c) "I expect and hope that as a changed person he will reflect and make absolutely clear that these unacceptable views he circulated privately, he will never, ever express again."
With regard to the first point it was Elizabeth I who famously declared she didn’t want to make windows into men’s souls. In other words a Catholic could remain Catholic in private belief so long as he or she publically attended a Protestant Church. Similarly past American Presidents might well have racist beliefs but politics and pragmatism saw them championing Civil Rights.

The second point – a fuzzy generalisation - is equally debatable. A public figure would be bonkers to blog controversial views or bad taste, or post them on Face Book. But a private email should be that - private. The postal Services Act of 2000 declares it a criminal offense to wilfully open another person’s letter to their detriment, and backs this up with a potential £5000 fine. Though, to my knowledge, there is no similar legislation with regard to email, the principle is essentially the same.

Jowell’s last point is just plain totalitarian. Richard Scudamore’s views are not my views. They amount to schoolboy giggles from a fifty-two year old man. Even so, he is perfectly entitled to say what he wants in private and to friends. I imagine there are equally raucous, tasteless and sexist outbursts at Hen Parties.
I am not championing Scudamore’s comments. I am arguing against thought control in the private sphere.
It is more important to judge someone by their deeds than what they might say or not say in private. In Richard Scudamore’s case he has joined with the FA and Sports England to promote a new FA Woman and Girls programme with a £2.4 million investment. And has publically proclaimed his intention that the football lead aims to be at the ‘leading edge’ of the ‘whole equality agenda.’

It will be interesting to see the outcome of the disciplinary action to be published next week.

There's a similar situation here in the states with some basketball team owner who said some racist comments.

Aside from the fact that the man comes across as delusional anyway, racist comments are just plain ignorant. Still...it was supposedly a PRIVATE conversation. People are allowed to say stupid things in private letters and conversations.

Scudamore's mistake was using his business email box for private conversations. And for not having a non-disclosure agreement with his employee.

The basketball owner's mistake was having an untrustworthy mistress.

Much as I despise juvenile and ignorant behavior, the idea of having the body politic control how we should think is even more dangerous.

What I find amusing is how easily people jump on the bandwagon without seeing the bigger problem.

Maria, I heard Sterling's apology on the radio. It was so abject it gave me the creeps - like something from the Great Show Trials of the 1920's, or from Mao's China. Whilst what he actually said to merit this apology was offensive and stupid, a mistress on the make and, I suspect, boardroom skullduggery and people who wanted to oust him, were equally to blame. The bottom line is that we don't need 'red guards' and 'thought police' to tell us what's wrong, or just simply stupid. A lot of these people would be the first to complain if C19th Catholic priests were telling us what to think, and what constitutes good and bad behaviour. Rant over :)

I agree with you both. I agree that sexism, racism and the like should not have a place in the world, but isn't forbidding the above from being done in public against the concept of freedom of speech?

I also thought of that basketball team owner while reading this post.
He has been banned from basketball for racist comments made to his mistress. While I personally found his comments offensive, he made them in private and it should have been his right to do so.

Misha, and Linda, I think you've hit the spot separating the mature from the shrill. Hmm, do spots make good boundaries? Oh well : )