I heard on the radio people talking about daffodils. I was cleaning my teeth at the time so something may have been lost in the gurgle of tap-water and the spitting of foam, but they seemed to be saying that daffodils were not good to eat, in fact they were dangerous. I dried my mouth and tuned in. Who in God's creation ate daffodils?
No one apparently, unless by accident, and this was the point of the interview. Demands were being made on supermarkets to move daffodils well away from the vegetable and fruit section in case they were mistaken for spring onions, or asparagus or chives. Another step in the relentless infantilisation of our culture. I mean, there are first world problems, and first world problems.

Okay, this verges on the reckless. The Co-op in Monmouth has daffodils dangerously close to apples. 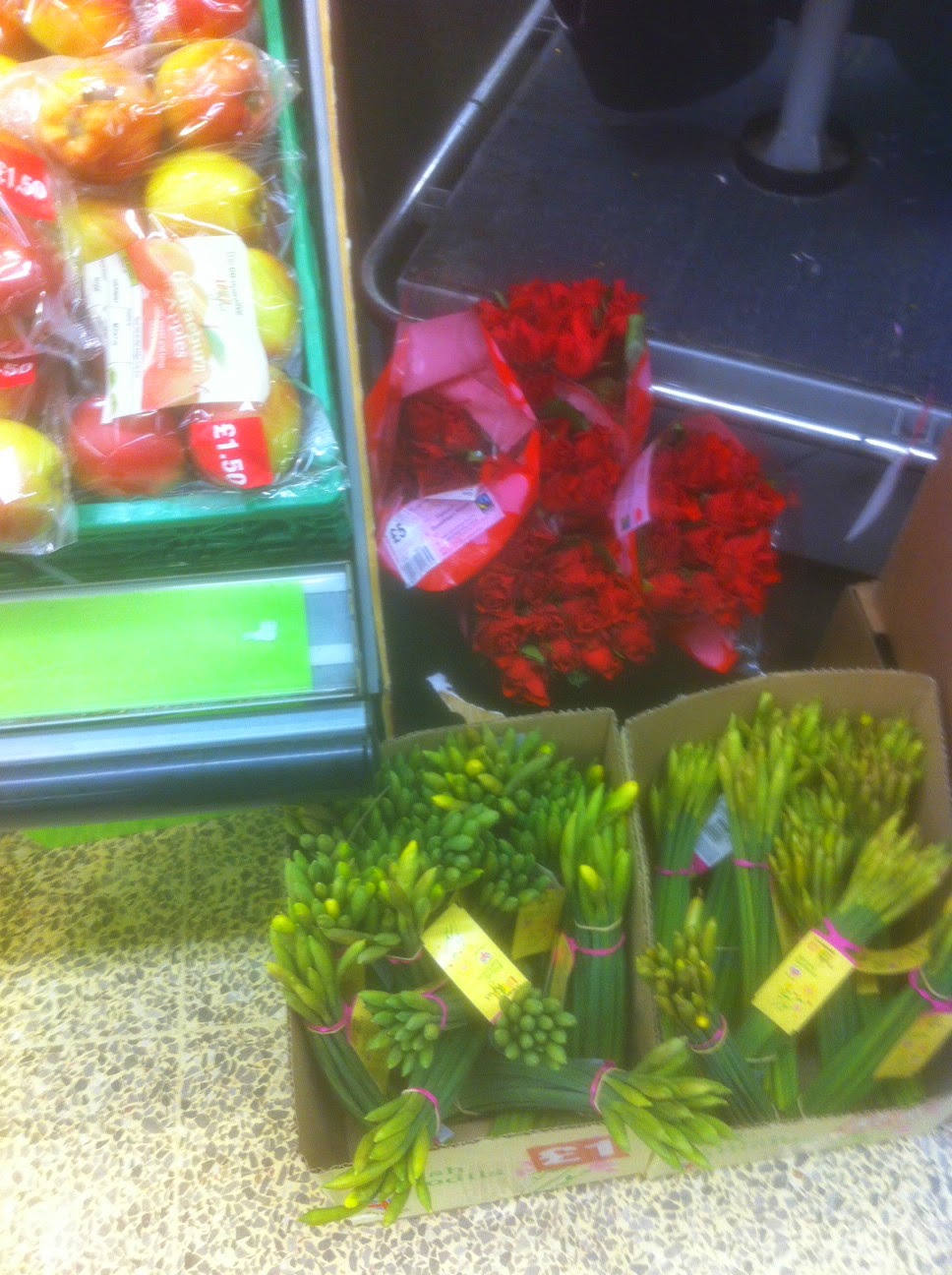 And of course there is no rhyme or reason for this. I haven't seen a single supermarket where Daffs have been segregated from their companion blooms, and suck by themselves in a vegetable rack. A flower section may be adjacent to fruit and veg, but it would have to be a noggin with an IQ of 14 to rummage amongs the roses and chrysanthumums, pick out a daffodil and mistake it for a spring onion.

There is also no consistency in this.

A few days later in the Times there was an article on the edible Dahlia. Not the flowers, you understand, (they are reserved for the garnish, until the next interview on The Today programme warning us of the dangers or eating garnish). No, what is edible is the Dhalia tuber, a cross between celery, carrot and potato. Some apparently taste like asparagus. Can't wait.

But will I find them in the vegetable section or stuck with the flowers some distance away? And what about the edible flowers? I sampled them all as a very young paperboy - rose petals, marigolds, nasturtiums, geraniums - all picked at and nibbled as I walked down long drives. Some had a nice, peppery taste, though privet leaves were more problematic. They were bitter on the tongue and left your teeth green. But what I'm thinking now is: I should have been warned! Why did no one warn me against daffodils?

The Aztecs didn't have this problem. They apparently ate chocolate, chillies and Dahlia tubers like there was no tomorrow. (Well, there wasn't for them) Perhaps the conquistadors should have come bearing daffodils.

Personally, I'm all for natural selection. If you're dumb enough to eat daffodils, then maybe you shouldn't be allowed to reproduce.

Damn it, Maria. I should have made that point in the blog. Thanks for pointing that out :)

WOW! This is a first for me. I knew of some edible flowers such as orchids, zucchini flowers, hibiscus and rose petals. In fact, I've had hibiscus juice and it's really good....but daffodils?
I always learn something new ;)

Yup, avoid Daffodils. If the serpent comes offering a bite of the Daffodil, turn the other cheek, Claudia

So are the people who mistake them for spring onions, Linda 😊